Always a people person, Frank Stevens rounds out his five page letter to his brother Ed and his young wife in Chicago with comments about their mutual relatives—mostly siblings, especially those whose darling babies are starting to take center stage around the old Stevens household. Frank’s been gone from home so long that he has not actually met these grandchildren of his dad and mom, but he sounds just as present in their lives as if he is right there with them, instead of half a world away in the south Pacific.

[One of Will and Agnes’ grandsons]  must be pretty good looking with his hair cut like a boy’s, I believe he has a lot of the old nick in him—should turn into quite a lady killer, make his uncle Ed look like an amateur. So me little god-daughter is a good baby huh? Well she just takes after her uncle Frank, ask your mother in law I was the bestest baby ever. Too bad I had to grow up. From Mom’s last letter it sounds as if the kid is allergic to damn near everything, maybe he will snap out of it later on—of course mom always did baby him too much and that might have a lot to do with the way he is now. His brother Frank is allergic to just two things: wild women and Canadian club.
While Frank is running away from wedding bells as fast as he can, it sounds like plans may be afoot for his sister, who has been writing a few letters, too.

Pat stops me, she never has known just what she want to do, that’s just what she needs though—a house full of kids and a husband that doesn’t beat her too often. Is the proposed victim that shavetail that has been over in Europe? Don’t know the lad myself but I’ve heard that he is a pretty nice chap. Well Pat is a good kid and I hope she knows what she’s doing, she’s sort of a feather-brained character though
I had to chuckle at the insight Frank had into his brother’s predicament in his new role as father. And Frank remembers some relatives on Ed’s wife’s side and wants to keep in touch with them, too. 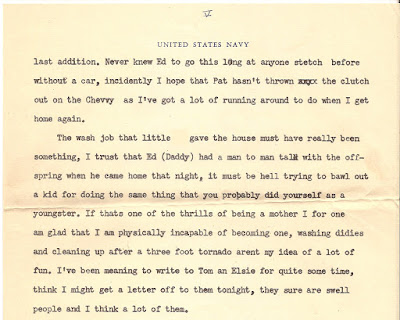 I see that Dee-dee is now known as daddy Ed, guess he proved himself with the last addition. Never knew Ed to go this long at any one stretch before without a car, incidently I hope that Pat hasn’t thrown the clutch out on the Chevy as I’ve got a lot of running around to do when I get home again.
The wash job that little [one of Ed’s children] gave the house must have really been something, I trust that Ed (Daddy) had a man to man talk with the offspring when he came home that night, it must be hell trying to bawl out a kid for doing the same thing that you probably did yourself as a youngster. If that’s one of the thrills of being a mother I for one am glad that I am physically incapable of becoming one, washing didies and cleaning up after a three foot tornado aren’t my idea of a lot of fun. I’ve been meaning to write to Tom and Elsie for quite some time, think I might get a letter off to them tonight, they sure are swell people and I think a lot of them.
When Frank gets to this last part of his extraordinarily long letter, he touches on a subject for which I had meant to provide more background information (and will in the Spring when we move on to that side of the family). It is indeed a sad conclusion to a now many-months-old story. And Frank awkwardly tries to inject some humor into a situation that perhaps hit him too close to home for his personal comfort.
The young man, Joe, that Frank refers to here is a cousin serving in the Air Force (at that time, part of the United States Army). Joe was part of the crews flying missions from England over Germany. In 1944, Frank’s aunt and uncle in Ohio received word that their son was missing and presumed dead—but evidently a search for confirmation was still being conducted. Yet one sad additional part to the story was that Joe’s young bride, Harriet, was expecting their first child.
I’m not sure who told Frank the news about Joe, but considering Frank’s own situation in the war at that time, it may have been just too difficult for him to take. One sometimes develops a tough exterior to survive the waves of devastating news that keep hitting. That’s how Frank sounds now as he awkwardly tries to cope with the confirmation about his cousin—the news that the family now knows, at long last, what has become of Joe McGonagle.

Kind of a tough break for Harriet but at least she knows that Joe is really gone, did she lose her baby or did she finally have it? From the way Bill McGonagle talked she is a pretty good looking girl. Ad. Stevens F. X. USN make a special study of young widows low rates call after six. Really shouldn’t kid I guess but what the hell tears never fixed anyone and a good time would probably make the kid feel a hundred percent better.
Johnny just came up and said “Sugar Report.” I said, “Yes, but don’t tell my brother Ed. We’re trying to keep it a secret.” So anyhoo Irish said “Sure and give Mutzie me love and a little regards to her old man.” See baby we all loves ya like mad. Haven’t got a group picture of the three of us but will see what I can do and some singles. Have to wrap this up now as its beginning to take on all the aspects of a book, won’t tell you to be good but as always be careful, take care of yourselves kids and I’ll do the same at this end, night now
Your affectionate brother
Frank
© Copyright 2011 – 2022 by Jacqi Stevens at 2:53:00 AM
Email ThisBlogThis!Share to TwitterShare to FacebookShare to Pinterest
Labels: Chicago, Family Letters, McGonagle, Stevens, Wars