Hard at Work in Paradise 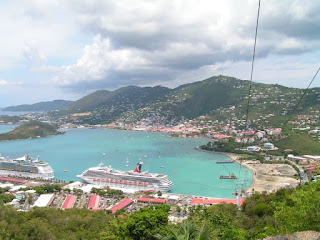 As the date moves into the new year and the training location moves to more favorable climes—none less than the white sands of St. Thomas in the Virgin Islands—one might easily confuse this naval enlistment for an extended vacation. Frank’s parents, William and Agnes Tully Stevens, may have wished that were so. Or, perhaps to assuage any feelings of alarm, the young Navy recruit may have deliberately tempered his letters accordingly.
A letter from Frank to his snow-bound parents in Chicago painted the picture of leisure, lolling around in the sun and soft breezes of Virgin Island beaches. Though the letter was dated January 19, 1942, it betrayed a new year that had snuck up on Frank—as we all sometimes do, he mistakenly entered the previous year when he meant to put 1943. After all, it was February of 1942 when he enlisted; he was now nearly one year into his term of service.
Postmarked January 20, 1943, from Charlotte Amalie, the principal city of the territory and port on the island of St. Thomas, the letter was cheery and mentioned very little actual news. Frank talked about acquaintances that had sent him letters—names like “Edith” and “Donna Grescoe” and “Fred Trent,” names not familiar to me. And he mentioned family—his mother Agnes’ sister Lill and his own sister, Pat—some who had written and some, surprisingly, who had not. 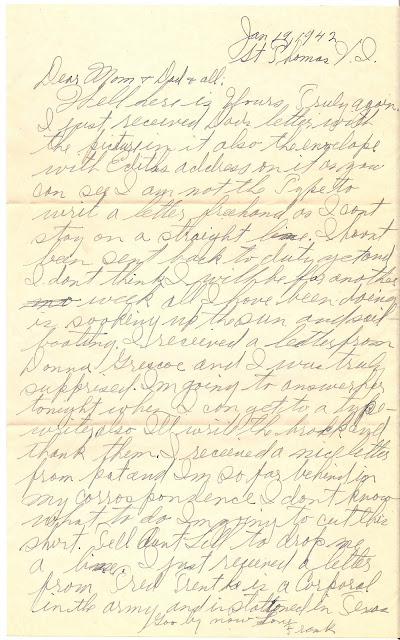 Dear Mom + Dad + all:
Well, here is Yours Truly again. I just received Dad’s letter with the picture in it also the envelope with Edith’s address on it. As you can see I am not the type to write a letter freehand as I can’t stay on a straight line. I haven’t been sent back to duty yet and I don’t think I will be for another week. All I have been doing is soaking up the sun and sail-boating. I received a letter from Donna Grescoe and I was truly surprised. I’m going to answer her tonight when I can get to a typewriter. Also I’ll write the brock [?] and thank them. I received a nice letter from Pat and I’m so far behind in my correspondence I don’t know what to do. I’m going to cut this short. Tell Aunt Lill to drop me a line. I just received a letter from Fred Trent. He is a Corporal in the army and is stationed in Texas.
Goo by now Love
Frank

Ever the clown, Frank was probably quite deliberate with his closing: “Goo by now.” If there wasn’t an “up” side to something, he wasn’t about to wait until circumstances changed. There was always room to insert a chuckle. 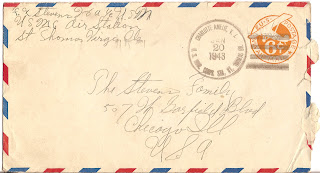 Photograph, top right: Port of Charlotte Amalie on the island of St. Thomas, courtesy Wikipedia user Olav76; image in the public domain.
© Copyright 2011 – 2020 by Jacqi Stevens at 2:48:00 AM