It’s fairly apparent, just from the little bit I’ve seen while working on my Tilson line, that there are details needing a little adjustment in The Tilson Genealogy. Written by Mercer V. Tilson in 1911, the book covers a phenomenal amount of data in cataloguing the descendants of the immigrant, Edmond Tilson, who settled in Plymouth Colony back in the 1600s. But face it: one author cannot get it all right.

While puzzling over the fuzzy details under the entry for Janet Tilson, daughter of William Tilson and his wife, Mary Ransom, I ran into my first indication that her name might actually have been Jennet—or Jenny for short—in an abstract of marriage records in Saint Clair, Washington County, in Virginia. I also found myself struggling with Mercer Tilson’s details about her husband’s name being Joseph Cole, and her son’s name Sampson. I was unable to confirm this through documentation available online. True, while not everything has been digitized for online accessibility, there were some online reports asserting that a Joseph Cole claimed a woman by a different name as his wife. And a Sampson Cole was showing as having parents by different names, as well.

While those may have been instances of mistaken identity, they still made me realize this was an area that needed some attention. I want to pursue these details further.

Since Janet Tilson Cole was likely named after her paternal grandmother, it was encouraging to unearth records that indicated that the senior Janet’s name was actually rendered as Jennet, as well. While not source documents themselves, a database posted on Ancestry from the Family History Library labeled Massachusetts Marriages, 1633-1850 indicated a “Jennet Murdoch” married Stephen Tilson on 17 April, 1740. Also, volume two of Mayflower Births and Deaths had a listing for “Jennet” Murdock, daughter of John Murdock and Ruth Bartlett, who was born 10 December, 1711. Notice both records—well, at least as transcribed—showed the spelling as Jennet.

While I realize spelling was a flexible skill subject to artistic interpretation in previous centuries, computer searches are comparatively rigid in today’s world. While some search engines of a genealogical kind have been sensitized to spelling variations, some have not. Hence, the need to consider searching by the keyword spelled “Jennet” as well as the customary Janet I’ve been seeking.

As I turned back to all my usual resources to try that alternate spelling in my searches, I ran across an entry at Ancestry.com that reminded me of two keys. One was that there is another resource I’ve yet to consult. Two was a reminder to read other researchers’ comments. I found both those hints in the comments for one entry, not for Jennet but for her brother Lemuel.

I’ll get to that other resource in a moment. First, let’s explore the comment at Ancestry.com that reminded me that genealogical research can sometimes benefit from a crowdsourcing approach. As it turns out, that mysterious “Saint Clair’s Bottom” where the Tilson family settled in Virginia may have started out with a similar name: Sinclair’s Bottom. According to one Ancestry subscriber,

Saint Clair…has evolved over the years but originated as Sinclair’s Bottom, named for Charles Sinclair, who was the first settler in that area… Dr. Thomas Walker found Sinclair in that area in 1750 during his expedition of “The West.”

Of course, that comment came with absolutely no documentation, but I see it as a trailblazer’s gift, bidding me to follow the path and check it out for myself. If nothing else, someone with knowledge of local history of the area should be able to point me in the right direction. It’s just a matter of contacting the right resources and asking questions. At least the comment provides a lead. Now I can view that as a hypothesis to be tested and either confirmed or negated—rather than a blank slate to be researched in what could end up being a thousand different possible directions.

The other hint I gleaned from this foray into other Ancestry members’ comments? A reminder that there is yet another resource to check for this Tilson genealogy. Apparently, two follow up volumes were drawn up to correct apparent errors in Mercer Tilson’s original publication, according to FamilySearch—though I can find reference to only one of the supplements on WorldCat.

Apparently, according to both Internet Archive and Open Library, the ebook version may be borrowed—which I’ll do, if I can ever figure out how to make the thing work for me. These, however, are not considerations which lend themselves well to late night comprehension, so will be added to my genealogical to-do list for the near—and less stress-induced—future.

At that time, you can be sure I’ll be zeroing in, right on these troublesome Tilson descendants whose records seem to contradict published assertions laid down, back in 1911. While ever thankful for the trail blazed by researcher Mercer Tilson, I’m also grateful for the access we have now to so many digitized documents online. It is likely in the confluence of all these resources that we will arrive at the blended truth of the matter. 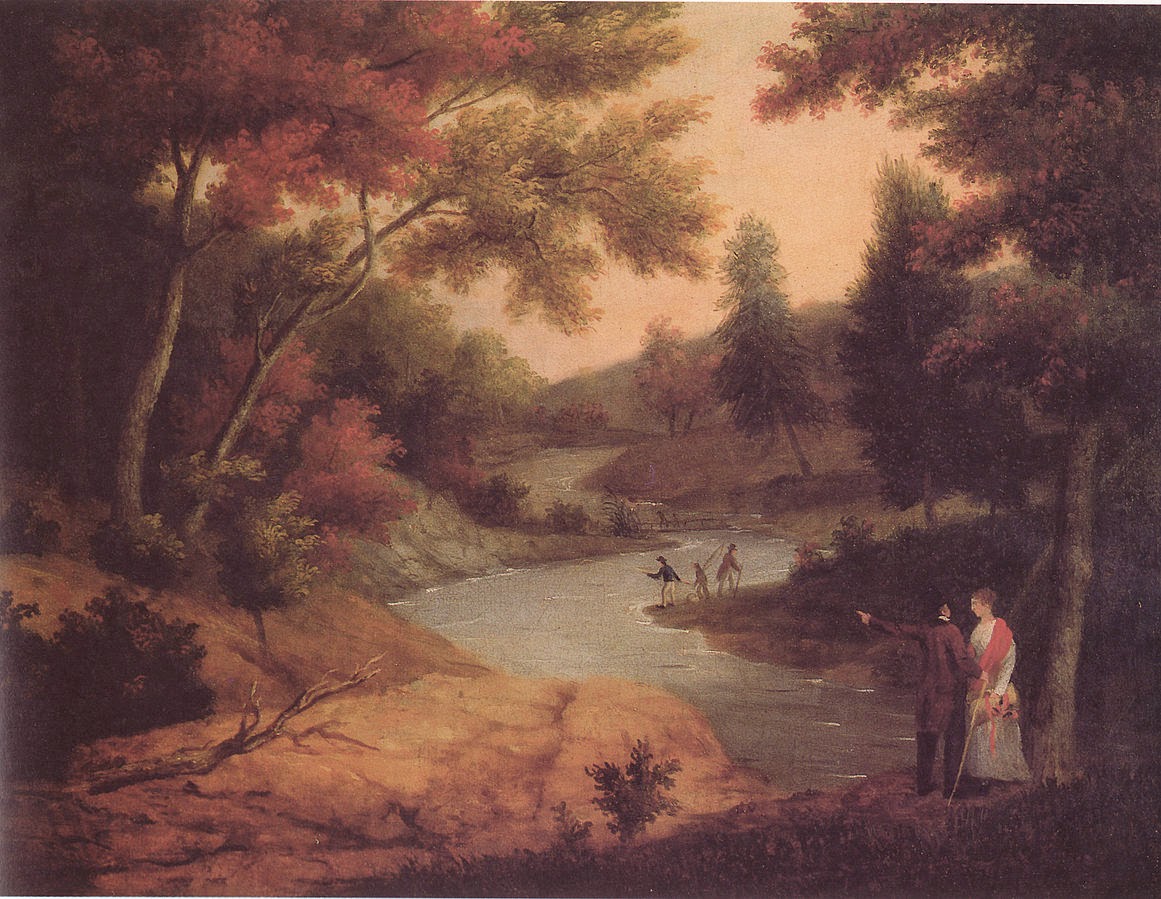 Above: "View on the Wissahickon," by James Peale circa 1830; courtesy Wikipedia; in the public domain.
© Copyright 2011 – 2022 by Jacqi Stevens at 2:45:00 AM
Email ThisBlogThis!Share to TwitterShare to FacebookShare to Pinterest
Labels: Books, Documentation, Tilson