Beginning With a Letter

Most family history inquiries begin by following a line through the generations, beginning with one's self, then moving to parents, then grandparents, and so on, back through time. However, following that route for my father-in-law would do nothing more, in the case of one particular great-grandfather, than yield us a name: Stephen Malloy.

Fortunately, there was a second way to approach my research dilemma. Thankfully, my father-in-law's family has included generation after generation of people who felt the compulsion to securely store all their "important papers." Thus, one generation would, instead of disposing of the previous generation's records, add them to the next generation's compilation.

Thanks to this generational hoarding, I became the keeper of a photocopy of a photocopy. The original this copy was drawn from was a letter, written from Liverpool, England. The letter was dated February 20 of 1849, just hours before its sender, Stephen Malloy, stepped aboard the Anglo-Americano and sailed for Boston.

That the announcement the letter contained might have been a surprise to Stephen's wife, I have no doubt. That there were serious gaps in the message, I seriously regret. I've been trying to decipher the missing words and handwritten enigmas in an attempt to read between the lines. Something keeps telling me there must be more to this story than what I can determine from its face value.

Even so, in revisiting this research problem now—the last time I considered the letter was over seven years ago—I spotted some details I previously missed.

With that, let's review the letter and its transcription, provided as closely as I could decipher it—spelling variations and all—as I noted it back in 2014. Tomorrow, we'll explore what else might have been implied in the text. 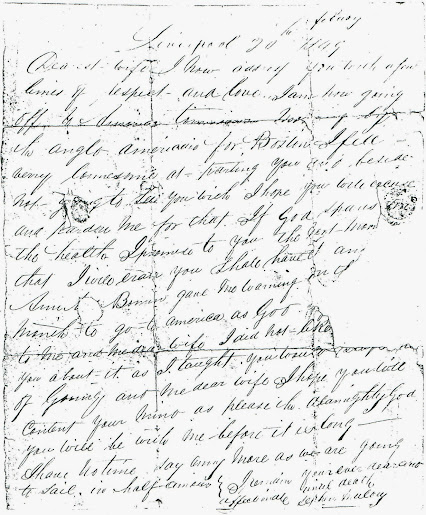 Liverpool 20th febuary 1849
Dearest wife, I now address you with a few lines of respect—and love. I am now going off to a [dis…] [tomorrow?] … … by the Anglo Americanio for Boston. I fell verry lonesome at parting you and beside not going to see you wich I hope you will excuse and pardon me for that. If God spares me the health I promise to you the next … that I will [erase?] you shall have [it?] [any?] … [Anuit?] [Bom--?] gave no warning on th- … month to go to America as God [section of letter torn off here] to me and me dear wife I did not like [letter torn off here] you about it as I [taught?] you would … …of [going?] and me dear wife I hope you will content your mind as please the Alamightly God you will be with me before it is long——
I have no time say any more as we are going to sail in half-[am---?]
I remain your ever dear and affectionate until death
Stephen Mulloy

© Copyright 2011 – 2022 by Jacqi Stevens at 2:53:00 AM
Email ThisBlogThis!Share to TwitterShare to FacebookShare to Pinterest
Labels: Family Letters, Ireland, Malloy