One plus to revisiting our family history research trail over the years is the possibility that additional documents may have been uploaded to digitized collections. This was indeed what I had discovered while grappling with my father-in-law's puzzle concerning his great-grandfather, Stephen Malloy.

Having left his home in Ireland via Liverpool in a hurry, Stephen had written to his wife Anna, telling her that he was bound for Boston. While the name of the sailing vessel matched up with passenger records I've been able to find almost two hundred years later, that was the last confirmation of what had become of him.

Family stories didn't help the research effort. According to the oral tradition passed down by the family, Stephen Malloy had made it to Boston, alright—but some time after his arrival, he was shot and killed.

That's what his descendants had said, repeating the story generation after generation with no proof to substantiate the claim. I decided to look for myself—but that was years ago. Sure enough, I found his name on the right passenger list, arriving in Boston about March 27, 1849. But what about his death? Surely someone would have made an official note of such a crime.

Back at that time, I did stumble upon a possible record. It was, however, only a transcript, as many of the records available for genealogical purposes were at the time. 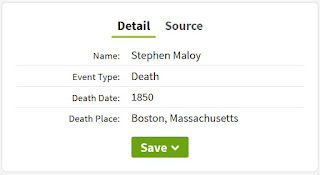 The record basically reported the death of one Stephen "Maloy" in Boston during 1850. The date looked reasonable, and since I'd already discovered the numerous spelling varieties used for Stephen's surname, an entry for "Maloy" didn't disturb me too much.

Clicking through on a second tab for the reference, labeled "source," gave me more information on this entry. It provided me with the name of the original document from which this indexed collection had been drawn—helpful information, indeed, if I wished to track down the source for myself to view anything more than a mere, possibly error-laden, transcription. 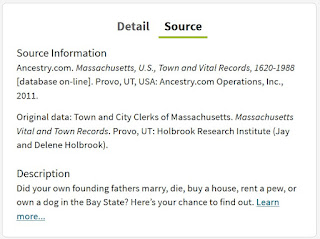 At the time I first found this entry—this was years ago—all I could do was presume this was the indicator of Stephen Malloy's demise, just as the family had insisted was his fate. Later, fortunately, the document itself was digitized, enabling me to see for myself the full story. In fact, there were several versions of the record made available, from typed transcript back to what appears to be a time-worn original version of the record itself.

Once I was able to view the actual document, I learned that, once again, our Stephen Malloy had thrown me off his track. The entry for the 1850 death was indeed for someone in Boston named Stephen "Maloy," but it was for a babe in arms aged one year and five months—hardly of an age to be husband of Anna Flanagan or father of Catherine Malloy.

The child, son of John and Elizabeth Maloy, was certainly not our Stephen. But what if the family could have been related to Stephen? After all, why did Stephen choose to migrate to Boston? He could, as did many Irish immigrants, have rather chosen the route to New York City—or chosen the more prudent expense of transportation to the British portion of North America, and head for Canada.

That Stephen's wife Anna may not have been entirely convinced of his tragic death was evident in that she, a devout Catholic, remained unmarried for the rest of her seventy three years—or, perhaps, she just never gave up hope that she'd see him again.

I, on the other hand, in revisiting this research puzzle couldn't help but take a look at all the other documents which have more recently been digitized and placed online for our benefit. While this may be a wild and crazy conjecture on my part, I couldn't help but notice that there were other records from the Boston area concerning men of the same name during that time period.

While a game of "what if" should never have any part in the final proof argument drawn up at the conclusion of a difficult ancestral search, it certainly doesn't hurt to at least consider other possibilities while we are still in search mode. And there was one possibility in particular which made me think twice.

Note: both search results, shown above in insets, are from Ancestry.com, as indicated by the hyperlinked text next to each example shown.