Learning About the Location

Having a copy of the letter which Stephen Malloy sent to his wife Anna in Ireland before his abrupt departure for Boston helps us just a little. After all, the address on the envelope—still kept with the letter itself—pinpoints where, at least, Anna was living in February of 1849.

I find it helpful, when beginning a new research challenge—or even when revisiting a brick wall with the hopes of this time tearing it down—to examine details on the place where these specific ancestors were located. Delving into the description and history of the ancestor's location can sometimes shed clues useful for further study: additional tips and resources, or explanations of situations which may have impacted our ancestors' life decisions. In the case of Stephen Malloy and his abandoned wife and daughter, I was searching for anything which might open up a little crack in that brick wall.

That said, I can't be certain that the address on the letter to Anna Flanagan Malloy was meant to send Stephen's message to his own home back in Ireland. Anna may have been well aware of Stephen's circumstances; his absence, though likely temporary, may have been an extended one, and she could have moved back home to be with Flanagan kin during her husband's absence. It is hard, given only one letter at this point, to tell what the entire back story might have been.

Though we are all quite familiar with how people address letters in our own times and location, we need to remember that that was not a universal, timeless custom. I had to learn from Irish researchers how residents of Ireland were accustomed to addressing letters, back in the 1800s. I also needed to keep in mind that Stephen, as a Catholic living in Ireland during that era, likely did not know how to read or write, himself, but may have required the services of someone else (hopefully a friend) to compose his message.

The envelope (shown below) bore this address:

Let's examine that information, line by line. On the very first line, we obtain the reminder that spelling was not an important factor during that time period, at least to the person writing the letter—and doubtlessly to Stephen Malloy, who probably knew very little about such details. It does, however, remind us to be just as flexible as we reverse the situation and attempt to find records for someone with that surname.

The second detail we need to realize is that this letter was being sent to someone located in a rural area far from any urban centers on an island which traditionally presented a uniformly rural setting. Thus, there was no need to designate a street name, let alone a house number. The address basically serves to direct the letter carrier from the point of the urban area through the next-sized town, and then on to the actual townland, where someone was sure to know who the addressee might have been.

Thus, we find Stephen's letter, sent from Liverpool in England, directed first to the seaport in County Cork—the city by the same name, most likely—then northward on the main road leading from the city of Cork on the way to Limerick. That midpoint was the town of Charleville, still within County Cork.

Just looking at the entry for Charleville at Wikipedia allows us to glean a brief sense of what the region had been experiencing, leading up to that time period. Keeping in mind that Anna was Catholic, the Wikipedia Charleville history observes that ever since the enactment of the Penal Laws, Catholics wishing to attend Mass had to do so secretly. Though that edict occurred well before the time of Anna's generation, over decades, it meant the abandoning of church facilities and the combining of Catholic parishes. Thus, the parish at Charleville became joined with parishes at nearby Bruree and Colmanswell.

Added in even smaller script underneath the address, as if an afterthought, was the direction, "care of," followed by an illegible name. Even scanning and enlarging the photocopy in hopes of making the script easier to decipher didn't help much. Perhaps the name was John Mason—judging from other examples of the handwriting, the initial letter seemed to be a "J" followed by an "o"—but the surname could just as easily have been something like "Melon."

However, knowing a bit more about the location now, it was easier to discover that the property in that townland was largely the responsibility of the Mason family, of which one John Mason was immediate lessor during the time of Griffith's Valuation. While it is not possible to know for sure—considering the condition of the envelope's copy and the unclear handwriting on that line—it is quite possible that Stephen Malloy addressed his last letter to his wife by sending it in care of the Flanagan family's landlord.

Now that we have a better idea of the vicinity in which Anna Flanagan Malloy had been living—at least temporarily—we can delve further into the geopolitical details tomorrow. After that, we will begin to explore the online resources available to us for our research on this family. 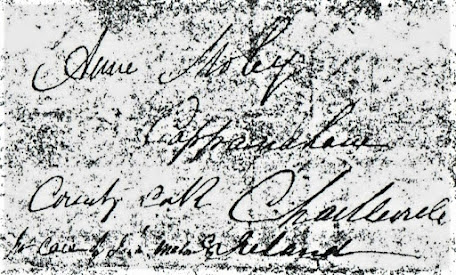 Above: Enlarged detail from the envelope containing the 1849 letter, handwritten on the behalf of Stephen Malloy and addressed to his wife back in County Limerick, Ireland.