Of Cars and Memories

Sorting through the photograph collections of long-gone family members can give us an idea about what meant the most to our departed loved ones. While I didn't exactly inherit the pictures kept by Marilyn Sowle Bean—hers became a rescue project only because of the kind tip from another genealogy enthusiast—they augment the perspective I've gained about the Bean family from the photos I did inherit from other members of that extended family.

I've written before about the dealership in Alameda, California, owned in part by Marilyn's father-in-law's twin brother, Bill Bean. Years ago, when I had received his stash of photographs, there were several featuring that particular business enterprise. From examining Bill Bean's collection, I learned that not only did his dealership sell Chryslers, but they originally started with Plymouth and DeSoto. (That little detail I recently found corroborated in this website recounting brief histories of Bay Area car dealerships—scroll down the alphabetical listing to find Bean & Cavanaugh and the note that it became the second of Chrysler's dealerships established in California.)

Bill Bean's business partner was a man known as Lee Cavanaugh, though from Bill's collection of photos, I never saw any labeled with the man's name. Marilyn, on the other hand, with her tenacity about labeling photos, insured with this picture that I'd make not one, but two additional discoveries about that part of the Bean family's story.

The one, of course, was to find a photo which included what looked like a very reluctant participant—but nonetheless was labeled with his name: Lee Cavanaugh. The other was to realize the third man in the grouping, casually sporting a double-breasted business suit—possibly a clue as to his current occupation as salesman for the dealership—was Marilyn's own husband, Earle.

It is almost as if each person's photo collection comes with its own personality. While both family members included photos of the car dealership in their personal collections, the photos each person chose to keep reflected the angle at which they viewed the subject—even a subject as mundane as one's livelihood. 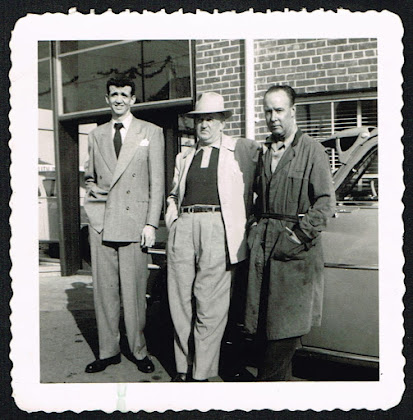 Above: Photograph from the collection of Marilyn Sowle Bean, circa 1951, showing Earle Bean on left, his uncle Bill Bean in center, and Lee Cavanaugh on the right. Likely location is the Bean & Cavanaugh car dealership in Alameda, California.

© Copyright 2011 – 2022 by Jacqi Stevens at 2:47:00 AM
Email ThisBlogThis!Share to TwitterShare to FacebookShare to Pinterest
Labels: Bean, California, Cars, Family Photos