Closing the Cover on
Lee, Flanagan, and Malloy

It's the close of another month. How quickly they fly. This month, my task was to find out what I could on one secretive ancestor of my father-in-law: his great-grandfather Stephen Malloy.

While the disappearing Stephen Malloy gave me the slip yet again, it wasn't for attempts to track him through his wife's Flanagan line, or even through a Flanagan niece and her marriage into a Lee family in Chicago, all with roots back in County Limerick, Ireland.

The idea with my "Twelve Most Wanted" project each year is to select one ancestor per month to research—actually, more like filling in the blanks where previous work had left off. The hope is, in the span of a month's research, to answer one specific question. In September's case, my hope was to discover just where Stephen Malloy came from in Ireland—specifically, who his parents might have been.

All that eluded me just as mysteriously as the man himself disappeared after his arrival in Boston in 1849. I am still left with nothing more than a copy of the letter he sent to his wife that year, before boarding the boat taking him away from his home in Ireland.

There are, of course, tasks yet to accomplish. For each of the surnames, now that the records are digitized and available online, I can search through the baptismal entries to find possible siblings (standing in as godparents) in the home parish of Ballyagran. Likewise, on the Chicago side of the search, I can look for church records—if they are still in existence—for more recent events, such as Johanna Flanagan's marriage to John Lee, or the original baptismal record for each of the Lee children. Sometimes, for those born in one location but requesting sacraments in a far distant parish, the priest may make a note documenting the reply from the originating church. Notes such as that may be my only hope to see now-lost records preserved, at least in transcribed form.

There were, however, benefits in attempting to knock down this brick wall. Prime among them was the gleaning from reviewing old documents. Details missed in the first pass took on a different meaning the second time around. Others, though, just added to the confusion—like the detail from William Flanagan's own death record claiming that his arrival in Chicago was in 1875, when I was certain I had located him and his sister Anna Malloy in the 1860 census.

In the very years of such deprivation and death in Ireland, Catherine Malloy and her cousin Johanna Flanagan were born. Is it any wonder that there was a gap in the records kept by the priest in their home parish in Ballyagran? We sometimes lose sight, in our laser-focused quest to document our family's history, of the dire conditions our ancestors endured in that little dash between the dates of their life's trajectory.

Though I will again—some day—revisit this quandary, tomorrow begins another month. For this final quarter of the year, I will switch my research focus from my father-in-law's remaining research puzzles to tackle yet another set of problems. This time, we'll work on the questions lingering about my own father's mystery ancestors. These unanswered questions, all the legacy of a migrating couple determined never to let anyone know of their Polish roots, are beginning to unravel with the increasing accessibility of records worldwide. We owe a great debt of gratitude to those genealogy aficionados residing in other countries who, inspired by the same research zeal which motivates us, have found ways to make available for all their own nation's archived records. 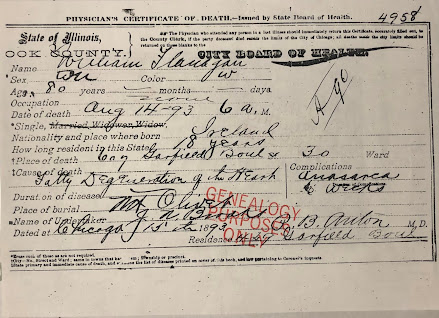 Above: The 1893 Cook County, Illinois, physician's certificate of death for Irish immigrant William Flanagan, who died in Chicago on August 14 at eighty years of age.