Stephen's Side of the Story

How many times do we discover one useful detail about the ancestor we are pursuing, only to find the information isn't quite enough to satisfy all our questions?

Take Stephen Malloy, great-grandfather of my father-in-law. The tantalizing detail about Stephen was that my father-in-law's family actually still had in their possession a letter which he had written to his wife, Anna Flanagan Malloy, on February 20, 1849. The downside was that that letter became the first and last token of his existence which anyone in the family had of the man.

The letter, despite its abysmal handwriting and decrepit condition—chunks of paper missing from what might have been key details in the message—still provided enough clues for a modern-day genealogist to do some fact-checking.

From the surviving details, we can glean such facts as where the letter was written—in Liverpool, not in Ireland—and Stephen's plans. He was immediately to set sail for Boston aboard a ship called the "Anglo-Americanio." Spelling not being the strong suit of the letter's scribe, it would be quite reasonable to assume the ship might rather have been named the Anglo-American. In fact, one vessel bearing that name docked in Boston harbor on March 27, 1849—five weeks after the date on Stephen's letter, a reasonable travel time for that era.

The bonus detail—at least for our research goals—was discovery of someone named Stephen Molloy listed in the passenger records for that ship. According to the scanned record, Stephen was headed from Ireland to the United States at age twenty six. He claimed to be a mason, and was apparently not traveling with any discernible family members.

Despite that serendipitous finding, realizing that Stephen's age in 1849 put his year of birth approximately in 1823 did not sit well with the discovery that, according to Chicago records at the end of her life, his wife Anna was likely born around 1812. In other words, that would make Anna, mother of Stephen's daughter Catherine, eleven years older than her husband—an unlikely scenario, given that time period in Ireland.

Furthermore, looking back at the tax records for the civil parish in County Limerick where Stephen's letter was sent to his wife, while we can find the encouraging sign of one Flanagan residence nearby, there is no mention of anyone by the surname Malloy. Nor Molloy. Nor any other spelling permutation of that name.

Stephen Malloy may have been sailing from Liverpool to Boston on the Anglo-American, but where did he come from before departing for his New World destination? 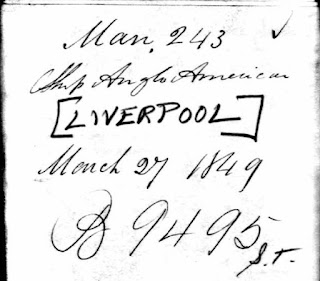 Above: Header for the scanned passenger listing for the Anglo-American, arriving in Boston from Liverpool on March 27, 1849; image courtesy Ancestry.com.