While it may be no surprise to discover that one's Irish ancestors ended up in such a place as Chicago, it may seem an abrupt detour, in the process of unfolding the story of Anna Flanagan Malloy, to suddenly be jerked across thousands of miles to consider one William Flanagan living in Chicago. However, in order for you to fully appreciate my joy in finding a William of such a surname in the tiny townland of Cappananty in County Limerick, Ireland, requires us to temporarily zoom forward in our story's timeline.

My first clue that there was anyone named William Flanagan associated with Anna Malloy came in the form of a headstone. Not in Ireland, but in Chicago. An impressive monument for a supposedly single man—and likely a mere immigrant laborer at that—William Flanagan's 1893 memorial directed one's eyes heavenward, but it was what was written on the plaque itself which caught my attention:

Other than the omission of one solitary letter—an additional "a" belonging in the Catholic parish name of Ballyagran—William Flanagan's headstone in Chicago was an immensely helpful discovery in pinpointing the place for us to eventually visit during our travels to Ireland. But it also led to other confirmations.

Locating William in the 1860 census meant discovering that he, a single man, lived with a woman—at least according to the barely legible scrawl of the enumerator of that Chicago district—by the name of Ann Mulloy. Better yet, this "Ann" had a daughter with her named Catherine, by then of an age calculated to yield a birth year of 1847, close enough to suit our purposes. All three residents of this household were born in Ireland.

Though the 1860 census included no explanation of relationship between members of the same residence, I know from research into subsequent years that Ann—Anna—and William were siblings. The verification, itself, was indirect, but sufficient. The 1885 death record for Anna carried the handwritten note that she was "Mother of Mrs. John Tully," the now-grown daughter Catherine who had been left fatherless at her dad's disappearance in 1849. And William Flanagan's own death notice, published in the Chicago Tribune that August 15, 1893, mentioned that same "Mrs. John Tully," daughter of Anna Flanagan Malloy, as "his niece."

Add those together, and we get William as brother of Anna. But the Flanagan siblings were in Chicago, and Anna's original goal was to trace her husband, Stephen Malloy, to his destination in Boston. Why the thousand-mile discrepancy?

We'll need to return to the Flanagans' old home in County Limerick to revisit that question. This time, we'll trace the story from Stephen's side of the puzzle. 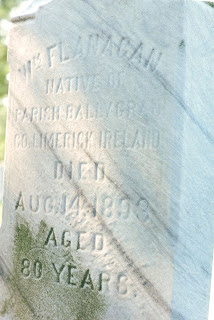 Above: Photograph of portion of the headstone for William Flanagan, buried at Mount Olivet Catholic Cemetery in Cook County, Illinois, United States.