To have identical twins in your ancestry is one thing, but to have those twins named almost identically adds to the record-keeping confusion. In the case of Marilyn Sowle Bean's father-in-law, she did have a situation in which the man and his twin had identical names, except for one detail: the order was reversed. One was named Samuel William; the other was named William Samuel.

There was, however, one vast difference between those identical twins. Due to a freak accident during his teen years, Marilyn's father-in-law became both blind and deaf, a story I've written about several years ago.

Now, thanks to the discovery by a local genealogy enthusiast of Marilyn's discarded photos in a local antique store, I've been able to rescue both a photo of the (deceptively) cherubic twins and a picture from the other end of life, labeled simply "Dad Bean."

The portrait, composed by a photographer in the Engle studio in Redwood City, California, was taken just before the turn of the century, judging by the appearance of the twin sons of Leon and Ella Shields Bean, who were born in 1896. 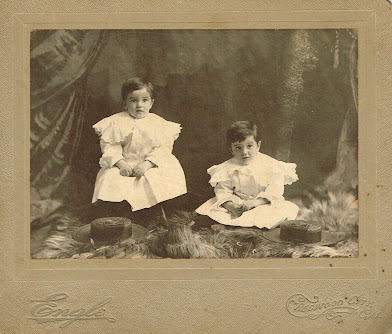 What was interesting about seeing the candid shot at the other end of Samuel Bean's life was that, had it not been labeled on the reverse, I would have thought it was a picture of William Bean. The photo depicted Samuel Bean, amidst a pile of wood, holding a saw. Unless you knew this blind and deaf man was skilled at woodworking, it might have seemed an out-of-place scene. I know differently, because the only item of furniture passed down to me from this family happens to be a parquet wood chess table built and inlaid by Sam Bean. 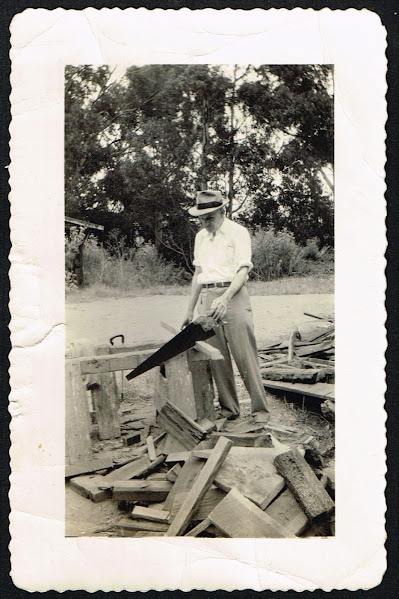 © Copyright 2011 – 2022 by Jacqi Stevens at 2:47:00 AM
Email ThisBlogThis!Share to TwitterShare to FacebookShare to Pinterest
Labels: Bean, California, Family Photos, Shields