It's the end of summer, the last chance—at least, in the traditional sense—to enjoy a weekend gathering before the start of school, the return from vacations to work, and the unmistakable signals of approaching autumn.

Rummaging through the photos I had rescued from a local antique shop, thanks to being alerted by a local genealogy aficionado, I found this one in Marilyn Sowle Bean's collection. Looking very much like a summertime photo taken during an outdoor gathering—although, likely snapped in southern California, making it hard to determine the season—it featured two women and their pets.

Uncharacteristically, the photo didn't include any label or explanation on the reverse, but it doesn't take a relative's handwriting to clue me in that this was a picture of a young Marilyn, possibly even before her marriage to Earle Bean.

It was not only because of her recognizable facial features, but owing to one more detail, I knew this was unmistakably Marilyn: she was holding a Pekinese.

Though I never knew Marilyn to own a pet of her own (for the remainder of her life, her children took care of that detail for her), I do recall her mentioning several times how she loved her Pekinese dog from her earlier years. Now, through this picture, I finally get to see the pet she was referring to.

The drawback to this photo remaining unlabeled was that I did not get to learn who the other woman was, posing next to her. Also accompanied by a pet dog, this woman seemed old enough to have been, possibly, Marilyn's grandmother, rather than a mother or aunt. And yet, since Marilyn and her parents had moved so far from their extended family, back in Wisconsin, I couldn't help but think that maybe this woman was just a close family friend, or maybe even a neighbor. Unless I can find another photo with a similar face—hopefully, next time labeled in Marilyn's characteristically careful hand—the other woman's identity will remain a mystery. 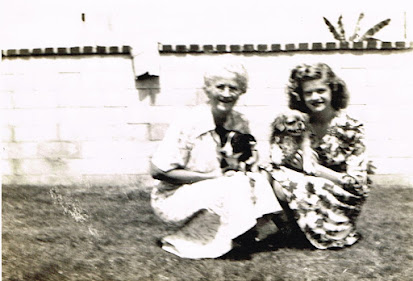 Above: From the rescued photo collection of Marilyn Sowle Bean, an undated picture of Marilyn (to the right) and her pet Pekinese dog, along with an unidentified woman and her own pet dog.