Breathtaking. Beauty. The hills. The greenery. The oohs and ahhs—and eeeeks!—as we drove along rain-slicked, one-and-a-half-lane country roads. That was the part of County Kerry, just north of Killarney, where our Kelly and Falvey ancestors once lived.

Because our Kelly line was the last to emigrate from Ireland, I thought we stood a better chance of tracing some of these ancestors on paper, back in County Kerry. Civil Registrations did not, up until 1864, include Catholic marriages—thus, I miss any governmental record of the marriage of John Kelly and Johanna Falvey—but beginning at that same date, the addition of both birth and death records helped at least a little in locating possible whereabouts of the family before they left Ireland.

Because of the Civil Registrations’ beginning date for births, I was unable to locate any record of their daughter Catherine’s birth—she being my husband’s great-grandmother. But various records for the birth of Catherine’s younger sister Mary suggest John Kelly no longer lived in Knockauncore—although, apparently, property records show both a Kelly and a Falvey woman renting property there since the early 1850s.

The trouble with the various transcriptions for Mary Kelly is that there may actually have been two children by that name—the one born in 1864 likely not surviving childhood, and her name subsequently given to a later child in 1867.

Of the various baptismal records, we can piece together the trail the family left as they moved from location to location. One record for the 1864 Mary had her living in Currow, although the sponsors’ names of James and Margaret Fleming match that of the neighbors in Griffith’s Valuation for the two Knockauncore women I suspect may have been the proud grandmothers. Another record for 1864—as well as the later Mary’s arrival in 1867—showed the birth in a place called Molahiffe.

It wasn’t until later that I found an entry for John Kelly, himself, in the Griffith’s Valuation for Molahiffe—which, it was explained, is the name of the civil parish. The actual townland was listed as Lisheenacannina—the very place our bed and breakfast host had struggled to identify for us during our visit in Killarney. I also discovered that the civil parish for Knockauncore was Kilcummin, another name I had run across. Could the Currow entries for the Marys with the same general dates have referred to the location ("Barnfield" and "Killeentierna") of the Catholic Church diocese? Or were these two Currow entries, coincidentally, for yet another John and Johanna Falvey Kelly who also happened to have two daughters born in 1864 and 1867—both of whom they named Mary?

Another question I had, before traveling to Ireland, hinged off these many small towns to which the family’s name was linked. Could they all be for the same family? Someone on a Facebook genealogy page had suggested comparing the distances between each of the townlands to see whether travel would be feasible, back in that era. Having driven in the area, I did sit down and map it all out. 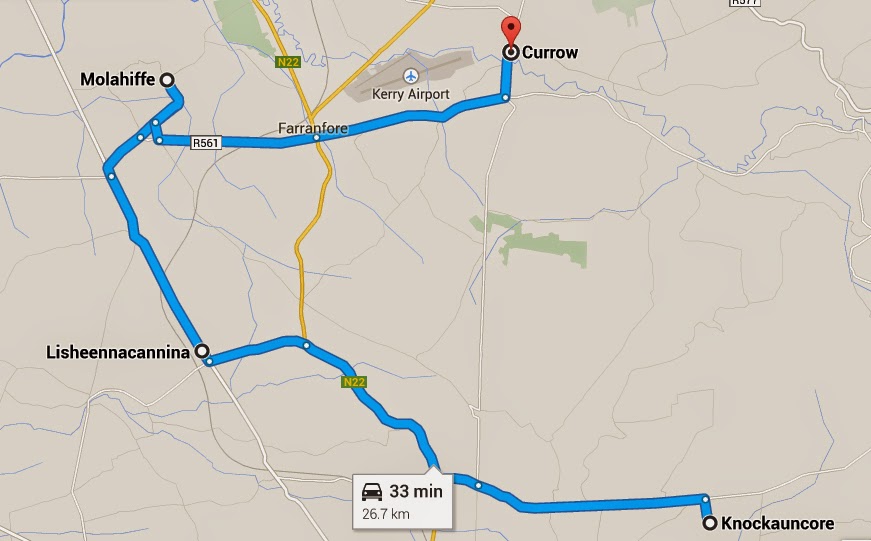 The distances would not be beyond the realm of possibility. Then, too, when I discussed this with various archivists and genealogists in Ireland, they indicated that, due to rent issues on properties at that time, families could find themselves frequently moving from place to place. Our Kelly ancestors' situation could be an example of those rental difficulties.

No matter how beautiful the surroundings may have been, I imagine it would have been quite taxing to not be able to adequately provide for a family’s well-being. Couple that with possible letters home from other family members, boasting of a land of plenty and a place of abundant job opportunities, and those rain-kissed hills may have lost some of their verdant allure for a family hard-pressed to survive tough economic times. 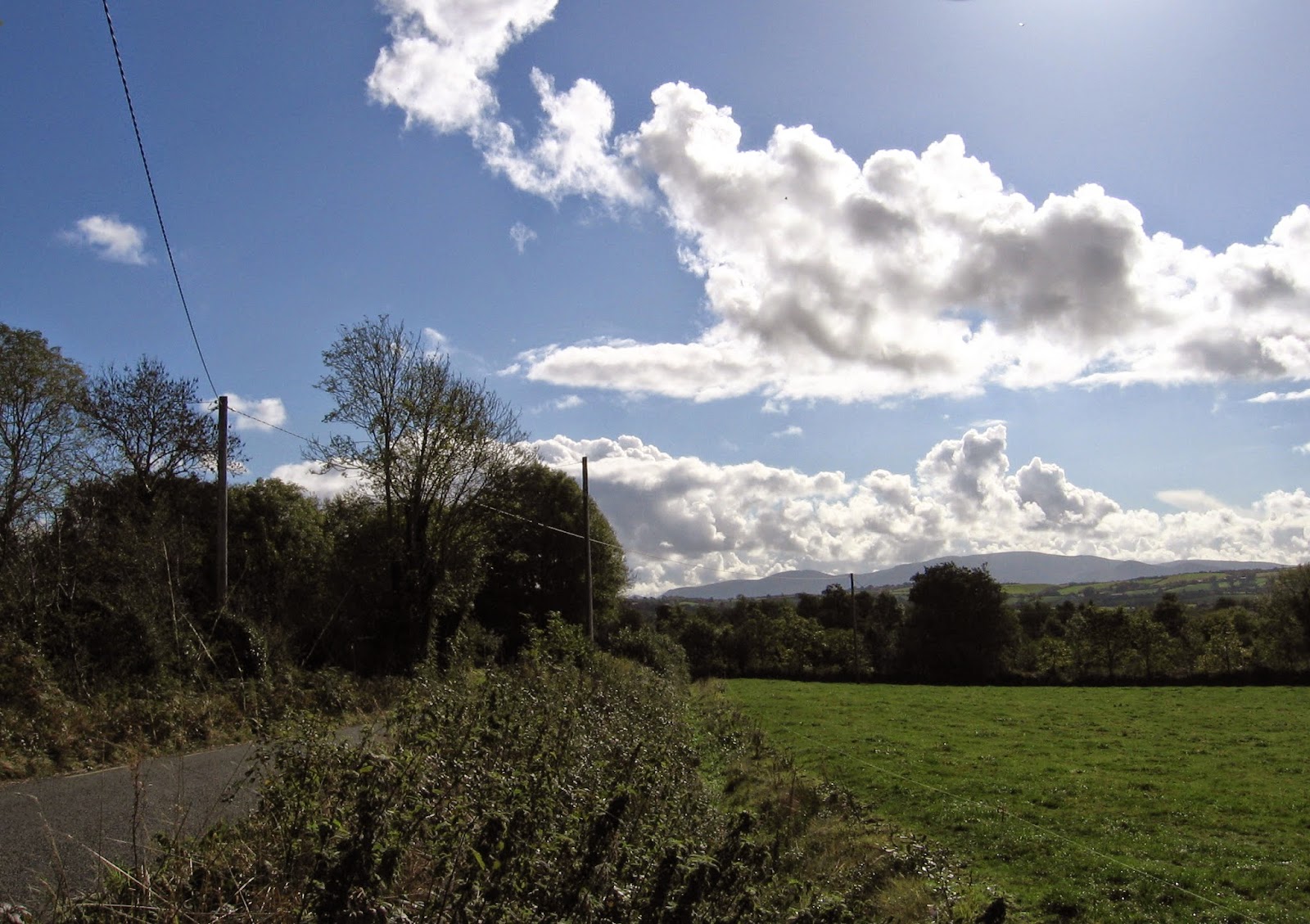 Photograph: Field along a country road in or near the townlands of Lisheennacannina in the Parish of Molahiffe in County Kerry, Ireland; courtesy Chris Stevens.
© Copyright 2011 – 2022 by Jacqi Stevens at 2:49:00 AM
Email ThisBlogThis!Share to TwitterShare to FacebookShare to Pinterest
Labels: County Kerry, Falvey, Ireland, Kelly, Research Journeys