“A Dear Profitless Spot of Land”

Surely, none of these terms would make sense to anyone in the English-speaking world but the Irish—well, at least the Irish who are familiar with the “traditional” designations of land divisions. I’m sure you’ll be as grateful as I was to uncover a study explaining those ancient divisions of land in Ireland, compiled by the first director of the Ordnance Survey of Ireland and posted by some kind and sympathizing soul on Wikipedia.

It is after this point that our tongues finally stumble upon words that seem vaguely familiar. Two ballyboes make one ploughland. And four ploughlands make up one townland.

And you thought pronouncing the names of the townlands was difficult!

The townlands in Ireland—that Gaelic system of land division pre-dating the Normans—form the smallest unit of governmental administration under the civil parishes. There are more than sixty thousand townlands in Ireland. To give you an overview of the townland names for just one county—County Kerry in the southwest coastal region of the Republic of Ireland—you can peruse the listing here. I’m sure you’ll spot some personal favorites among the many names listed, as I did—even if you can’t figure out how to pronounce them.

Despite the calibrations detailed above, those townlands are not of a uniform size, and an extensive amount of work has been done, over the years, to standardize the boundaries of these townlands.

Though you may have noticed the “town” in “townlands,” the concept of towns as we know it was not part of the traditional, pre-British, rural Gaelic system. That timeframe represented a more agrarian society and lifestyle. Indeed, the very term “ballyboe” comes from the Irish baile bó, which means “cow land.”

Of course, not every piece of property was designated for grazing land. But you can be sure each of those tongue-twisting townland names came with its own meaning.

As far as pronunciation challenges go, there are lots of townland names to put you to the test. Though I haven’t the faintest how to pronounce them, here are some of my favorites—all gleaned in honor of our visit to the townlands of our Kelly and Falvey ancestors in County Kerry.

Or how about Knockacappul? Here’s one the younger generation can celebrate: Knockaneacoolteen. See? They told you it was so.

Yes. There is a place called that.

Of course, there are unimaginative townland names like Acres. Or Barleymount—not just one, but three: Barleymount East, Middle and West. Someone must have liked that name. At least you can pronounce it. And then, the least imaginative of them all: Castlefarm. Ya think?

Not to say these names are all nonsensical creations. They do, of course, have meanings. Meanings reaching back far before the anglicization of the island. To get an idea of some of the place name meanings, take a look at this list of townland names for just the area surrounding the village of Currow. The translations describe something about each piece of property, giving a much clearer sense of what life might have been like for those hoping to gain their living from these green—or rocky, or sometimes desolate—patches of land.

Though the land might have been beautiful, it must have demanded hard work from those trying to extract a living from it. Consider the Irish place name Farran, meaning land, field or territory. Add to it the Irish word for dear—or expensive—and you find the townland name of Farrandoctor actually reveals a wry editorial comment on one person’s lot in life:

A dear profitless spot of land. 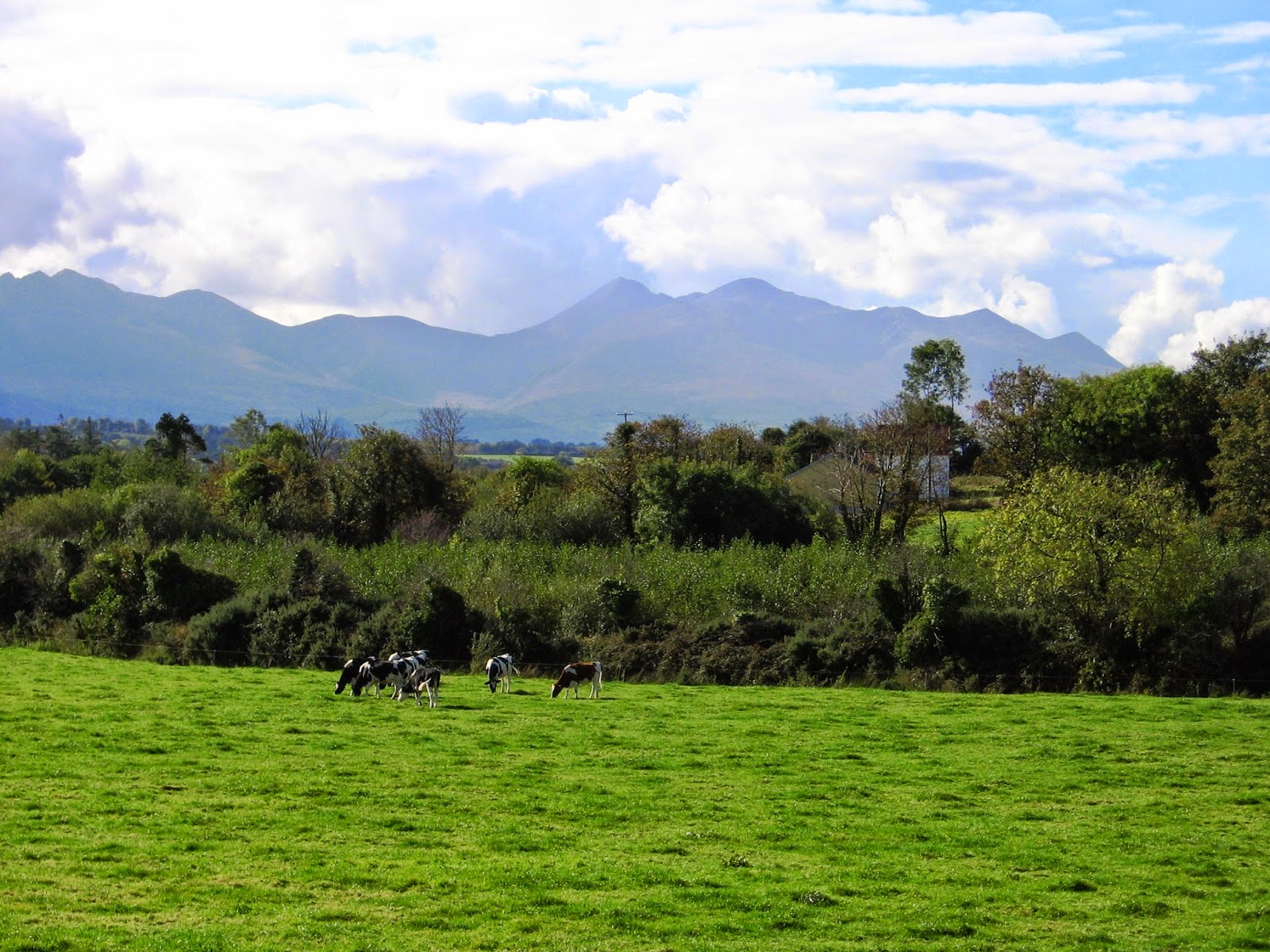 Photograph: Field with cows grazing, to the north of Killarney in or near the townland of Lisheennacannina in County Kerry, Ireland; courtesy of Chris Stevens.
© Copyright 2011 – 2022 by Jacqi Stevens at 2:48:00 AM
Email ThisBlogThis!Share to TwitterShare to FacebookShare to Pinterest
Labels: County Kerry, Falvey, Ireland, Kelly, Research Journeys