The Importance of Darby Tully

Have you ever researched a cousin whose family lore insisted on including him within the family constellation, but for whom you could find no documentation to confirm that position? That’s the sort of situation in which you’re not quite sure where to plug that name in, on the family tree.

In the case of my husband’s Tully family, I have one too many John Tullys. Perhaps more. I know all the stories. Unfortunately, now that I’ve gathered the paper trail, I know how to refute all those stories. So the names are out there, just floating in the ether, waiting for me—or for someone—to figure out how to plug them in to that big family picture.

Take, for example, the wedding pictures of my husband’s paternal grandmother, Agnes Tully Stevens—the ones hanging in the front hallway of his aunt’s home in Chicago. On the back of the photos, handwritten notes name one of the bridesmaids in Agnes’ wedding—a cousin—and explain that she was the daughter of John Tully.

Another note read that John Tully lived in Hammond, Indiana. Granted, Hammond is not far from Chicago—especially not far from the south side of the city where Agnes’ family lived. I’ve scoured census records, trying to connect this particular cousin with a father named John Tully, all within the parameters of a family living in that neighboring city in Indiana. As you likely are suspecting, I’ve had no success with that search.

To further complicate matters, I know the family lines of each of the cousins who were Agnes’ bridesmaids. Neither had a father named John.

Fast forward a few years to our trip to Ireland. I stumble upon this possibility that our John’s father Denis might have had a brother named Darby. And Darby just happened to have a son who was also named John.

Bling! That adds up to one extra John Tully in the mix. Could he have been the one who, later, moved to Hammond, Indiana? I’m sure hoping so, for I could use an extra John Tully connection. Not only that, but I have a few other Tully descendants hanging by a thread off the edges of my Tully family tree. I can’t seem to stitch them in anywhere.

One is a young man who’s only been identified by his initials: P. J. Tully. Not only is “P. J.” a popular combination among Irish-Americans during the era in which it was fashionable to use initials, but it just plain makes searching for possibilities difficult.

Another is a woman who died young—Julia Tully. All I have on her is a newspaper clipping of her funeral notice, tucked away in Agnes’ stash of papers-to-be-kept-forever.

Of course, confirming these possibilities won’t be as easy as it might seem. There’s this one extra step along the immigration way that must be taken into account: John Tully—that is, our John Tully—made his journey from County Tipperary to Chicago via another stopping point. Canada. And the John Tully that shows up in the census records there, cozily situated close to the Denis Tully household, might or might not be the right guy. It will end up being a matter of tracing the Tipperary John, son of Darby, forward as well as tracing the John, neighbor of Denis in Canada, backwards in time.

If Julia and P.J. were to belong to this mystery John Tully—and this John Tully were to conveniently be the son of Darby—it would present a tidy solution to these frustrating odds and ends I’ve accumulated from old family stories. Of course, no one remains who could set me straight. And I won’t snivel over how the 1890 U.S. census would have helped straighten out this mess. But the fact is, I’ve got names to plug into this Tully tree, but no branches to receive them. 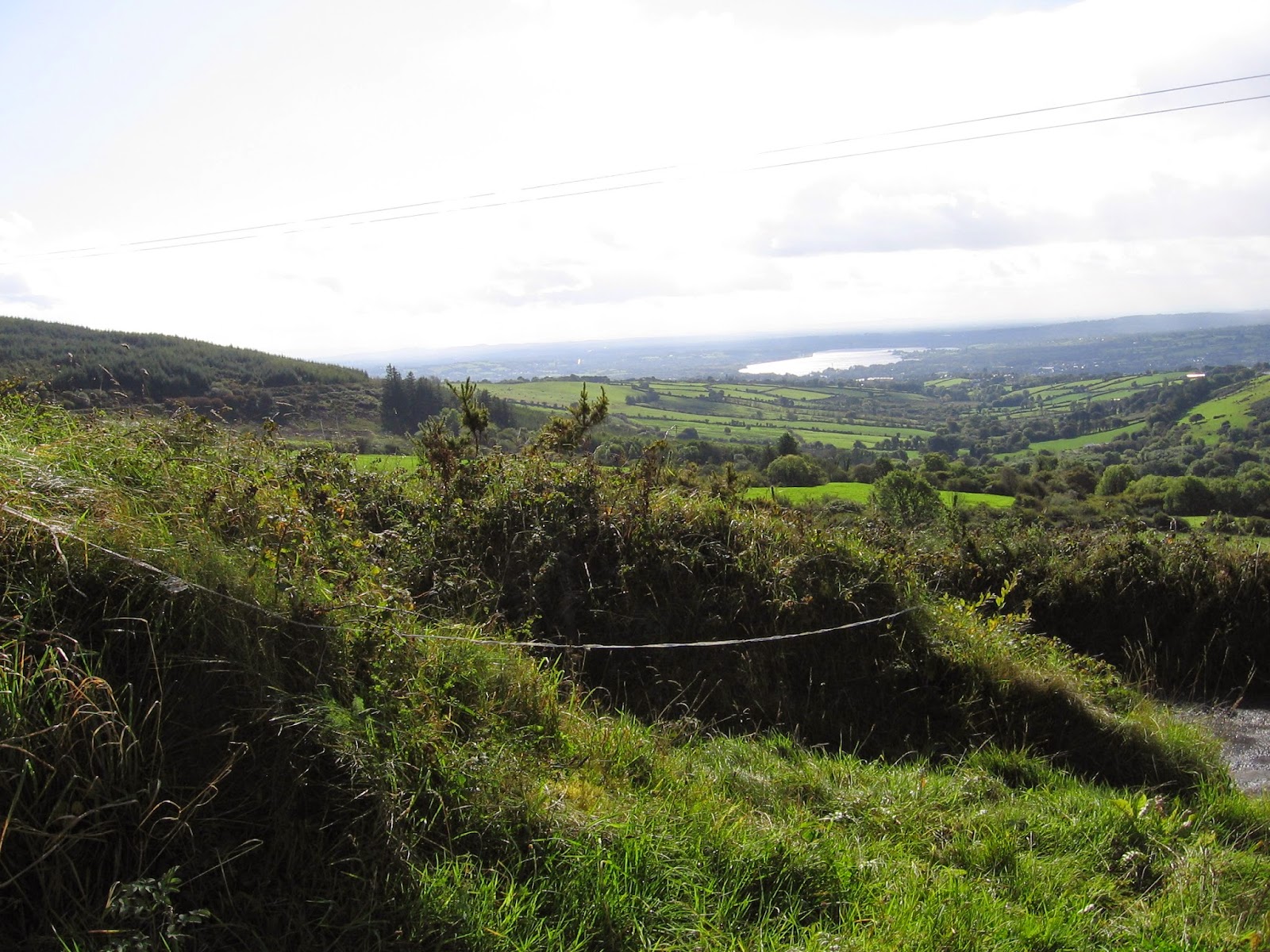 Photograph: View from the other side of Tountinna, the mountain on which Denis and Darby Tully once lived in northern County Tipperary, Ireland. This view looks away from Ballina and toward the far end of Lough Derg, but from roughly the same height as was the location of their property on the other side of the mountain. Photograph courtesy Chris Stevens.
© Copyright 2011 – 2022 by Jacqi Stevens at 2:54:00 AM
Email ThisBlogThis!Share to TwitterShare to FacebookShare to Pinterest
Labels: Chicago, County Tipperary, Ontario Canada, Tully