There are some people whose paths we cross, though strangers, whom we cannot subsequently forget. Whether for something done, some memento of significance or other token, there is an exchange that calls the person to remembrance.

While our own family has spent the greater part of the last month in Ireland, seeking details on my husband’s roots, there was one part of our trip in which I encountered someone I want to remember. Not a family member, not someone I met face to face, she was someone who, nevertheless, reached out and grabbed me and, in a way, pleaded for me to remember her. I’ve kept the only photograph I have of her, saving it specifically for a day like today.

Today is historically remembered as the anniversary of the end of World War I—Armistice Day—later designated in the United States as a day to honor all people who have served in the Armed Forces. While there are certainly many who deserve this recognition for their sacrificial service—even some in our own extended family for whom I again give thanks—today is a day in which we can express our appreciation even to those whom we do not know, never met, and likely will never see in the future.

One such person is Bridget Gilbourne. Daughter of Thomas and Ellen O’Donnell Gilbourne, she spent her childhood years living with her parents in the household of her paternal grandmother, Johanna Gilbourne. The family had once lived in Ballygulleen, one of the townlands in County Limerick, though she was said to have come from Kilmeedy—apparently, not far from Castletown-Conyers, where I first learned about Bridget.

At some point, Bridget made the decision to serve with the Women’s Auxiliary Air Force, part of the British Royal Air Force, during war years. In her duties there, she eventually rose to the rank of sergeant.

What those duties were, however, I may never know. All I know is that there was a headstone listing her name at the old cemetery at the Catholic church ruins in Castletown, where my husband and I went walking last month in search of remnants of our own family. Under the WAAF insignia, the inscription read
420869 Sergeant
BRIDGET GILBOURNE
Women’s Auxiliary Air Force
14th June 1946 Age 36

There were apparently one hundred nineteen casualties from County Limerick during the second World War. Two of them were women—besides Bridget, a private, Mary Collopy. All were commemorated in a book issued in 2006 in Limerick by war historian Patrick McNamara, Their Name Liveth For Evermore, and further detailed in an unnamed newspaper article posted on the Limerick City Council website.

Perhaps it was on account of the military affiliation—after all, there was that Air Force connection—that my husband decided to include her headstone among the others he captured in random photographs the day we were at Castletown. When we returned home and started reviewing all we had gleaned from our research trip, there it was: Bridget Gilbourne’s headstone, alongside the walls of the church ruins. Someone had evidently been by to care for the space—a small plant had been recently left there. Perhaps there was still a family member nearby, maybe from her brother Patrick’s family—Patrick being only an infant on the one piece of documentation I was able to find about the family, the 1911 census.

Bridget’s passing was duly noted in Peter Singlehurst’s The War Dead of the Commonwealth Cemeteries and Churchyards in the Republic of Ireland, a listing from the Commonwealth War Graves Commission. Perhaps Patrick McNamara’s book devotes a page—or at least a paragraph—to the cause to which she devoted her energies, and ultimately her life.

There is just something about headstones like this that makes me stop and stand still. I wish I knew the stories behind such small monuments. But since I don’t—and likely won’t be able to—the least I can do is take a moment and in whatever public way I can, say “thank you.” 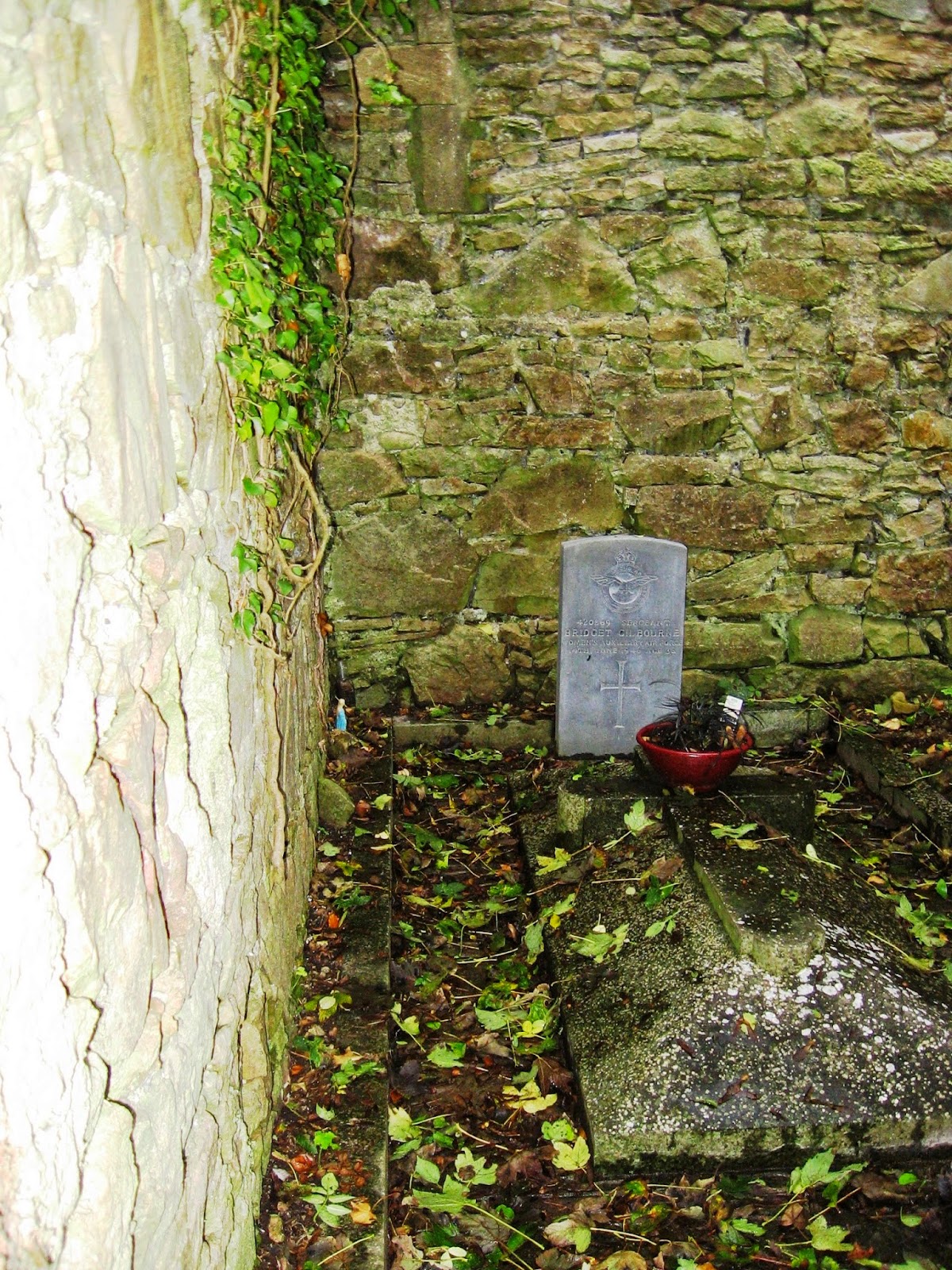