County Kerry:
How the Other Half Lived

One thing I had to face up to, when heading to Ireland to do hands-on genealogical research, was that I was not seeking the lines of the well-to-do. On the contrary, my father-in-law’s Irish forebears were all of a rather regular sort. Why else would they have fled the shores of their beloved homeland for an uncertain future—not to mention, a risky voyage?

Still, when we drove from our home base in County Cork to explore the region where our Kelly and Falvey ancestors once lived, we didn’t only zero in on the specific patches of greenery which once housed their shanties. We took a weekend to look around. This was, after all, the famed County Kerry, home of the Ring of Kerry, the drive along the Wild Atlantic Way. This was home to the beautiful Lakes of Killarney.

Besides, the count in our Volkswagen Passat rental car was now up to four non-genealogists and one dedicated researcher. Clearly, I was outnumbered. We did the tourist route.

One helpful aspect about taking in all the details of an ancestor’s home region is how it gives the researcher a sense of the bigger picture of life. The fresh smell of the air, the ever-shifting movement of the clouds, the abundance of rainbows: all went into the ambience of what life must have been like for our last set of ancestors to leave Ireland.

It was likely not until the late 1860s that our Kelly family left County Kerry. By then, it was John Kelly, the former Johanna Falvey—John’s wife of nearly ten years—and their surviving children Timothy, Catherine and Mary who headed to Fort Wayne, Indiana.

That, however, was not before the arrival of Queen Victoria at a neighboring household in the county. Of course, it’s doubtful that John and Johanna ever got to catch a glimpse of the queen at her arrival. They were living in one of the townlands to the north of the town of Killarney. The Queen and her entourage, however, were housed at the impressive sixty-five-room mansion known as Muckross House.

Since I knew the queen had been in the neighborhood back then, perhaps that was enough to excuse our party’s curiosity in getting a gander at the estate, ourselves. After all, it’s been in the hands of the Irish National Parks system since 1932. 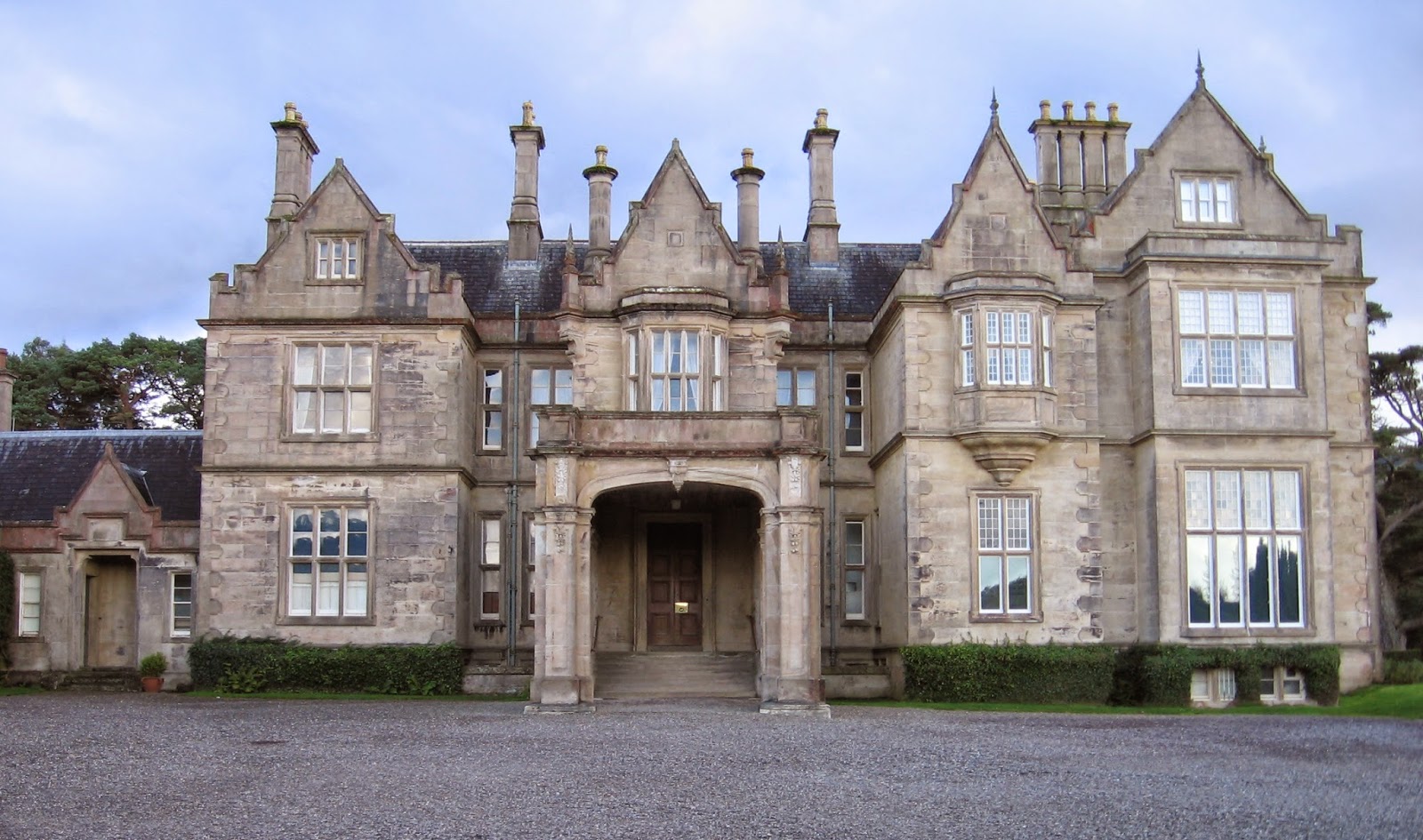 If the gravel drive leading up to the entryway seems rather plain to you, consider the view that greets a visitor exiting from those doors. Let me turn you around so you benefit from the proper perspective. 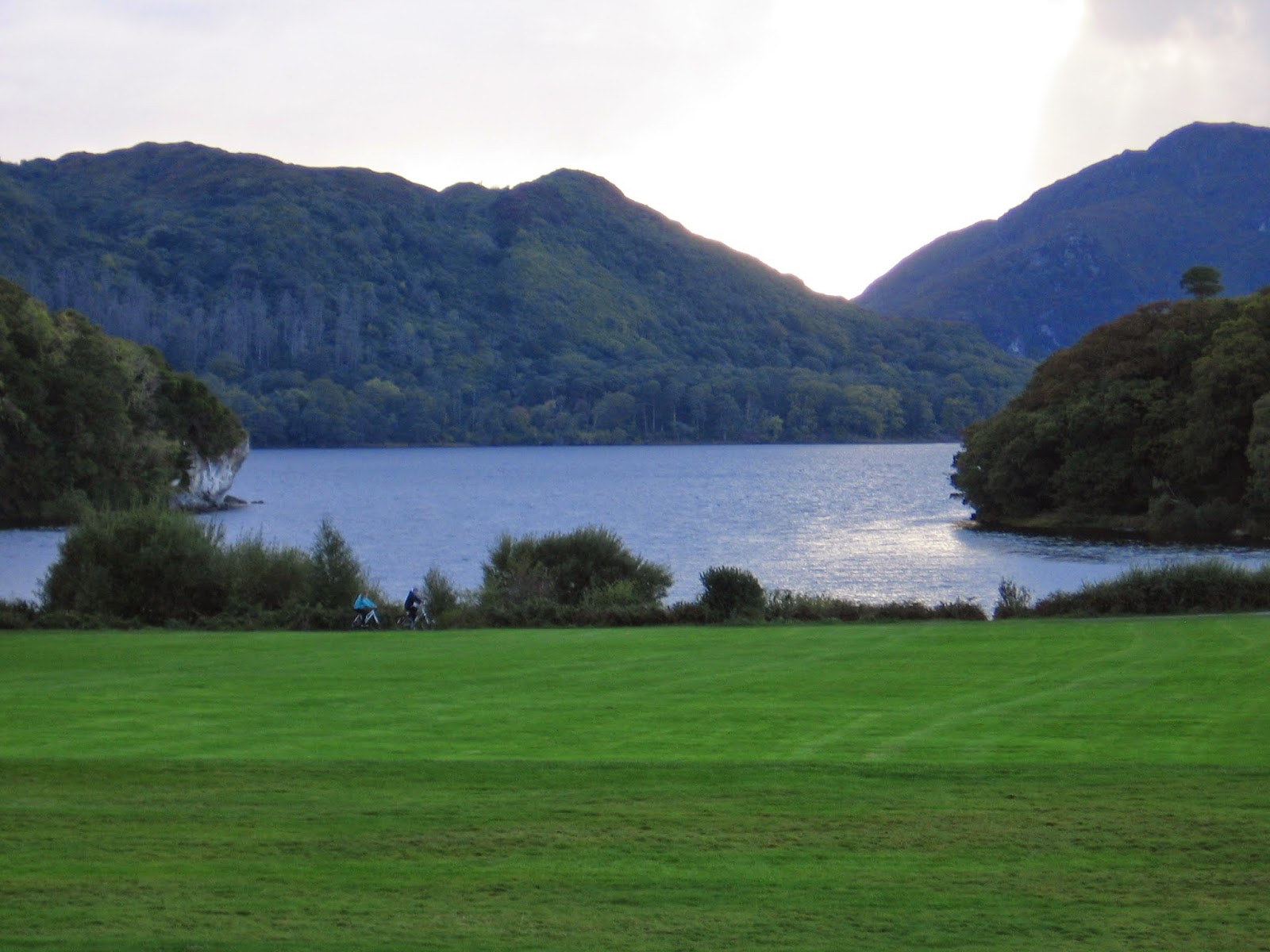 The view that greets you is a benefit of the beauty of the region—the Lakes of Killarney. To gain perspective, look for the two cyclists on the path just this side of the lake. Less than four miles from the town of Killarney, it seems like it is in a world of its own.

And it is. If you go about the same distance, only to the north instead of the south, you would still be in awe-inspiring natural beauty, but it would be sans the architectural splendors of such buildings as Muckross House.

There, you would find the rural settings where the commoner folk lived—the households of people like John and Johanna Kelly who would likely never be on the guest list for a social gathering at the mansion. Yet, while the door they exited each morning might not have been the entrance to as grand a domain, the view from the Kellys’ front door was likely as captivating as that of the Lord Lieutenant of Kerry, Henry Arthur Herbert, once host to the Queen of the United Kingdom of Great Britain and Ireland. 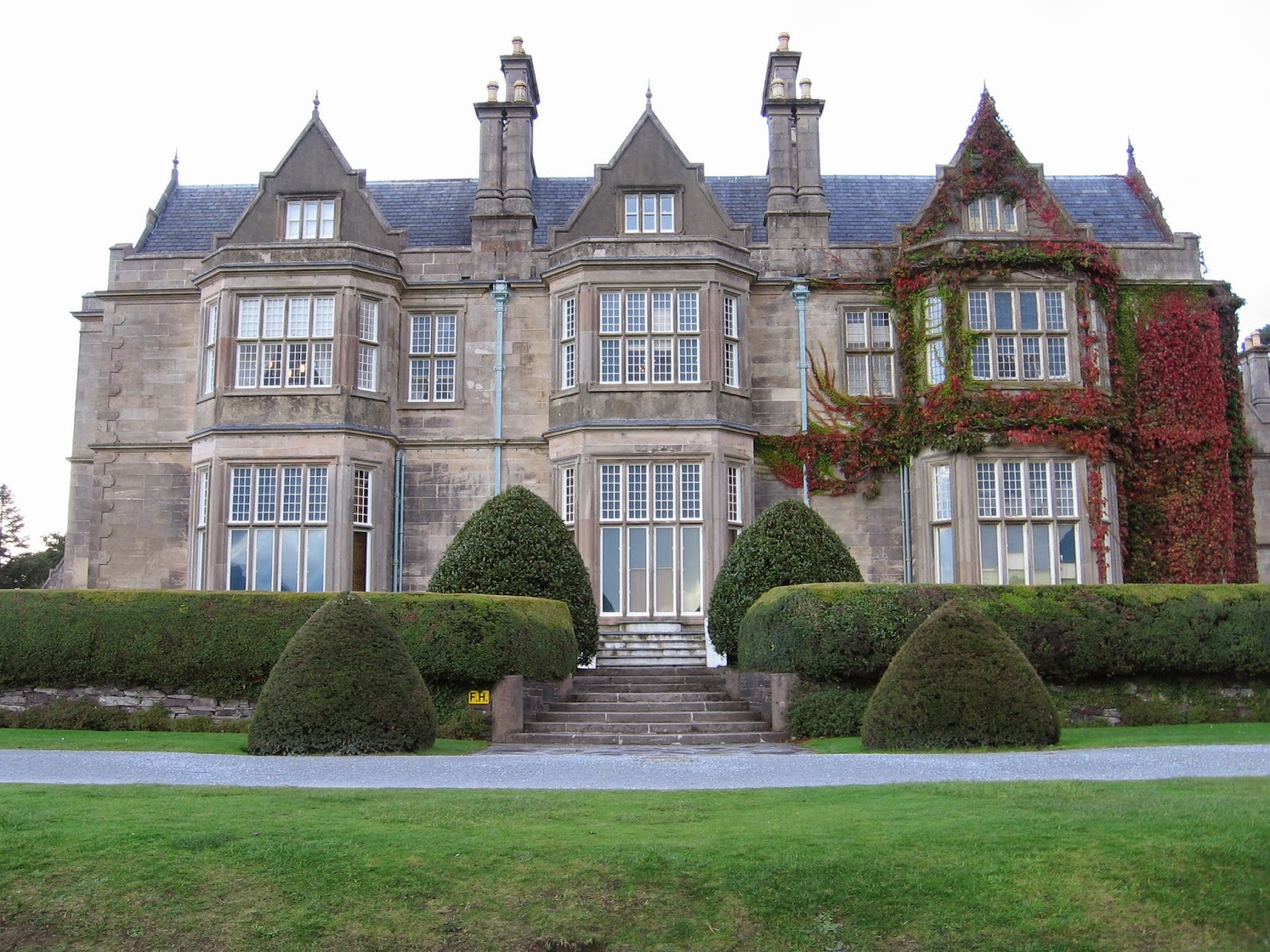 All photographs of Muckross House and estate in County Kerry, Ireland, courtesy of Chris Stevens.
© Copyright 2011 – 2021 by Jacqi Stevens at 2:52:00 AM