So, I’m sitting at my computer, minding my own business—well, at least the business of finding any connection between my Denis Tully and a Darby Tully who pops up nearby in Ontario, Canada—and what should I find but this off-the-wall document.

It's a death certificate—not an unusual find for someone immersed in genealogical pursuits. Frustrated at not locating any more about this Darby Tully of Blenheim Township in Oxford County, Ontario, I thought, at the least, I could glean his parents’ names from a death certificate—if, that is, he survived until the newly-minted government of Canada saw fit to record such information in their vital statistics.

That was going to be a long shot. Best I could tell, this Darby Tully was born sometime before the turn of the century—that other century. Like 1800. His chance of living through an entire century to reach governmental enlightenment—at least of the documentary kind—was extremely small.

I was game to take a look. I checked out Find A Grave. I wandered through local cemetery websites, thanks to leads from Google. And I put Ancestry.com through its paces, looking for death records.

At first, I looked for Darby. Finding no results there, I reverted to the more formal Jeremiah. Still nothing positive. Frustrated, I just entered the surname, and left the given name field blank. Seasoning that search recipe lightly with a restriction to the “location” field, I did find some possibilities. None, however, with the name I was seeking.

So I wandered. I’m good for that. And this is what I found: 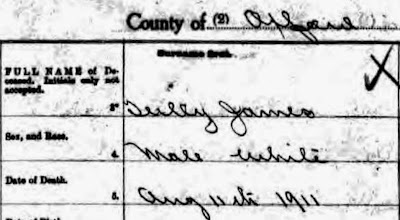 I know the given name James is not among my possibilities for Tully ancestors—or, given the more recent date of 1911, possible Tully descendants—but just in case this James turned out to be a son of one of my Tully clan, I rationalized I could trace this further.

Oh, who am I fooling: it was what followed that first half of the form that grabbed me, robbed me of all common sense and dragged me off, kicking and screaming, to find out more about this guy.

On the “Medical Certificate of Death” section, where the county official is supposed to “hereby certify” that he “attended the deceased,” the only line that follows expected format was the first line. His name: “Tully, James.”

Under that was a statement, “This is a case of being found dead from natural causes, probably heart failure sudden.” 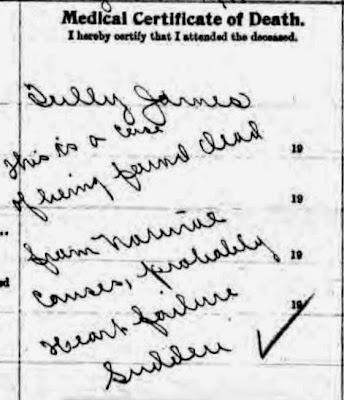 The rest of the form was left blank. There was no helpful information on the lines meant to designate date or place of birth. No clue of what his father’s or mother’s name might have been, or where they came from. No listing of even a spouse. What the reporting party saw was what the document got: his name—how that was obtained without gleaning anything else from whoever discovered the death is a puzzle to me—his gender and race, that he was a laborer, and the supposed date of death. Coroners are good at figuring that out.

Oh, and that he died in a place called Ingersoll, in Oxford County, not far from our (possible) Darby Tully in Blenheim Township there.

When I saw that, all I could think of was our Patrick Flannery, the poor unfortunate distant relative who was found dead in a frozen mill race. Until I ran across Patrick’s death mentioned in a news article, I didn’t even know there was such a thing as a mill race. The whole episode had struck me as such an anonymous way to go.

Maybe the anonymity of it all was what made me determined to learn something else about this James Tully, the guy who died alone (well, hopefully he didn’t have any assistance) on the eleventh of August, 1911.

So, off to the census records it was. For speed of search, I stuck with Ancestry.com for this one—some links won’t work for you if you’re not a subscriber—because they have readouts on each of the decades I’d need.

Not knowing how old our unfortunate James might have been, I started with the 1861 census. There, the only possibility in Oxford County was right there in Ingersoll—same place as where it all ended for Mr. Tully.

In 1861, James was situated in the household of one Henry Crotty, who gave as his occupation, “Gentleman.” A single man, James was listed as laborer, and declared himself to be twenty years of age, having arrived in Canada West from England—thus, in a piquant role reversal, becoming an English laborer serving an Irish gentleman. He was an Episcopalian, as was his employer, which automatically nixed him from possibilities of connection to our Tully family.

James likely remained in the Crotty household for the 1871 census, as he did for the 1881 census. After that, he seems to have done a disappearing act. Perhaps that’s when he went into a loner phase—a prelude to his lonely passing twenty years later, I thought.

You know I couldn’t let it go at that. He had been such a regular at the Crotty household. So I tried a different approach: I looked for his employer in the 1891 census. And struck out again.

Realizing that the good gentleman was likely born in 1812, and this was the 1891 census we were contemplating, I thought it might be prudent to try a different tack: look for his wife.

Sure enough, Mrs. Crotty was listed as a widow, but was still on the family property, along with her remaining children. In addition, Ancestry.com had noted a laborer in the household by the name of James “Nelly.”

I took a peek. Yes, I’d take that for James Tully. At least the birth year was consistent. What do you think?

By 1901, however, Mrs. Crotty had joined her husband, and the land was left to her children—at least, those who had chosen to remain. As for James Tully—or even James Nelly—there was no sign. Nor was there any indication of such a man with a birth year of 1841 in the Ontario records at any other location. He seemed to have simply vanished. Perhaps he was perfecting his Invisible Man routine.

Likewise, there was no sign of James Tully in the 1911 census. But we know he had to be there, for if nothing else, the official record indicates he was found somewhere in Ingersoll in Oxford County—the same place where he had lived and worked since at least 1861—by August 11, 1911. Always a fixture around the farm, he slipped away into lone anonymity when his services were no longer needed by the Gentleman.
© Copyright 2011 – 2022 by Jacqi Stevens at 2:51:00 AM
Email ThisBlogThis!Share to TwitterShare to FacebookShare to Pinterest
Labels: Ontario Canada, Tully