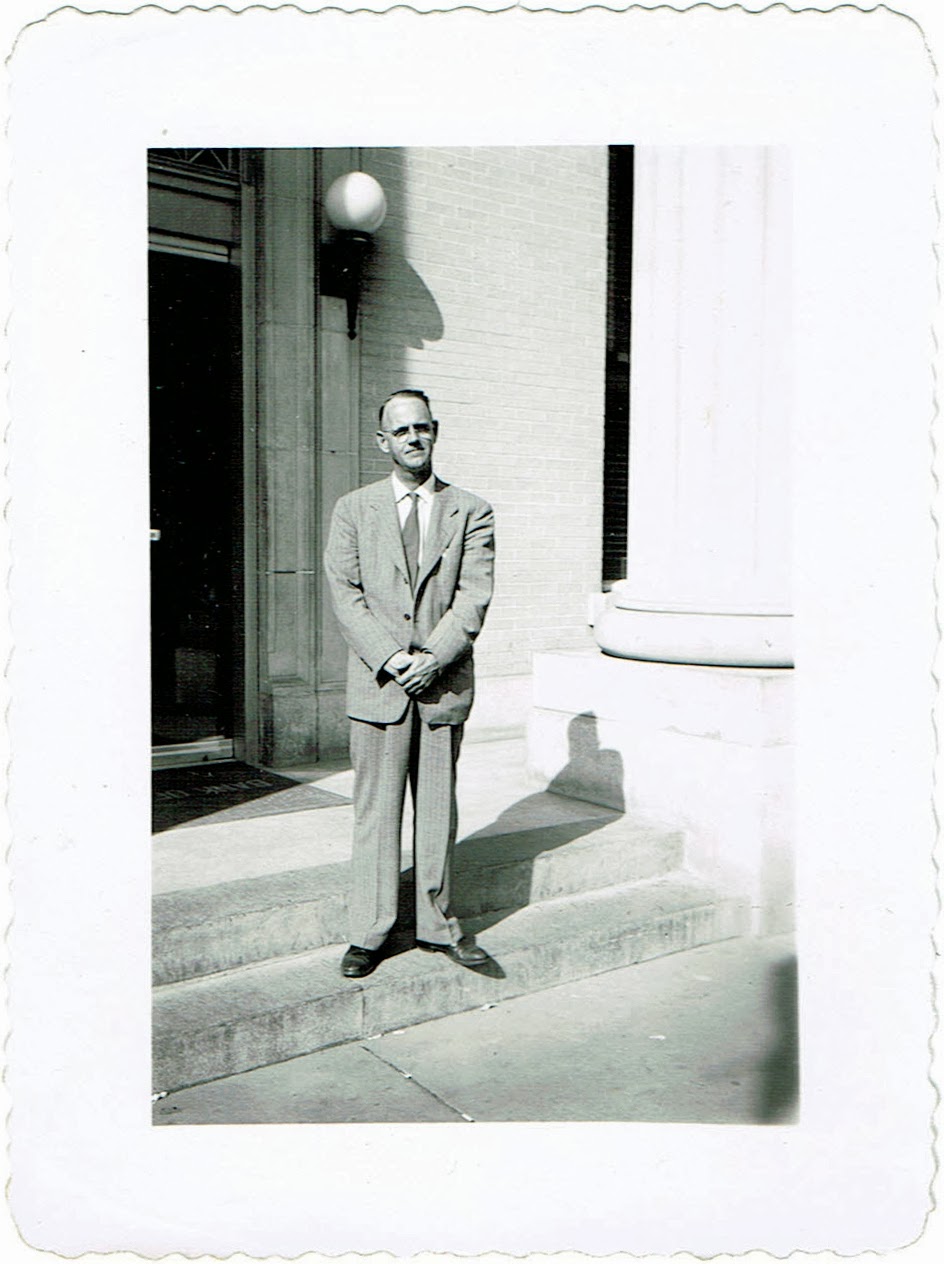 When it comes to nicknames, what may seem at first to be clues can turn out to be misleading.

There is a photograph tucked among my grandmother’s belongings that had me stumped for a long time. Unlike those many snapshots we all find in our elder relatives’ collections, this one actually was labeled. On the reverse of the picture, written in my grandmother’s distinctive hand using a green, fine point pen, was the explanation:
Wall Smith
March 1949

For the longest time, I figured the name “Wall” was doomed to signify “Brick Wall”—only the most recent in a long line of puzzles I wasn’t solving very successfully.

Then, while working on my mother’s cousin Sarah Martha Moore McKinnon’s line, I realized from a letter Sarah Martha’s mother Lummie had written that “Wall” was a nickname for Sarah Martha’s father, Wallace Moore.

“Wall is for Wallace,” I thought triumphantly to myself, and raced back through my files to find that abandoned—and totally unrelated—photograph of Wall Smith. Now, all I had to do was search through online records for a Wallace Smith to figure out who this mystery person was!

Well…everyone knows what it is like to search for someone named Smith. Even knowing this picture likely came from my grandmother’s roots in Florida, I couldn’t make any names, dates and circumstances come together sufficiently to reveal who “Wallace Smith” might be. The only thing I could do to provide any further hints was to blow the thing up on PhotoShop and look for details in the photographic field.

I did find one: the doormat at the entry of the official-looking building just behind Wall Smith bore the legend, “Bank of.” But Bank of what? The rest of the label was cut out of the picture.

Thankfully, we all benefit from the comments blog readers share, and I was most grateful for A Family Tapestry reader Far Side, who suggested I sort all my mystery photos by size and even by border design. Doing so, I found three other prints of that design—all, by the way, labeled by my grandmother with that same date: March, 1949. Evidently, my grandmother had taken a trip and visited a number of people at that time.

One of those other photos featured Wall Smith and a woman. They were standing in front of the same imposing building as I had seen in the other picture. On the reverse of this snapshot, my grandmother had written: 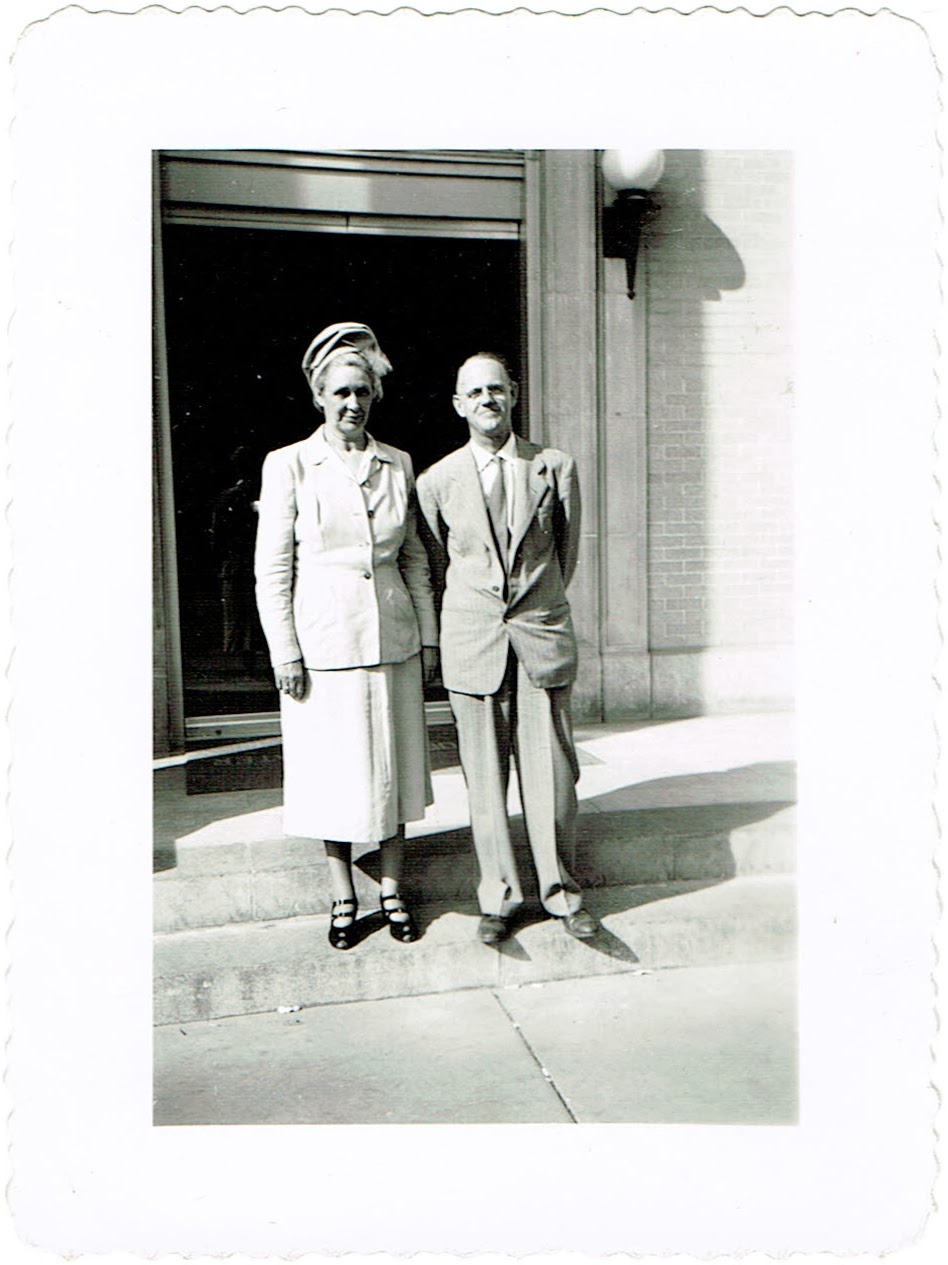 While I still knew absolutely nothing of who this “Wall” might be, “Lula” provided me with a big hint. My grandmother had a childhood friend from Fort Meade named Lula. While I had never heard my grandmother talk about Lula, I had seen enough written notes about this friend to recall her full name: Lula Childers. But even then, I needed my mother’s cousin to clue me in on the correct pronunciation—it’s not CHILD-ers, like we would pronounce the word “child,” but the name was pronounced with a short “i” as in CHILL-ders.

Could Lula Childers be the “Lula” who was “Wall” Smith’s wife? I took a look at what could be found at FamilySearch.org. Sure enough, there was a Lula Virginia Childers who married someone by the name of William Wall Smith in Hernando County, Florida, on July 20, 1948. Likely, that “Wall” came from William’s mother’s maiden name.

Just in case there were more than one Lula Childers in Florida at that time, it was encouraging to find the Application for Marriage License also at FamilySearch.org. There, I learned that Lula was forty eight years of age at the time of her marriage, and that she was a school teacher. More important was that little detail on the document revealing that she was born in Fort Meade.

The application form also told me that forty five year old William “Wall-Smith” lived in Clearwater, had been born in Tampa, and was a bank clerk. The photo I had found of the mysterious “Wall” was likely taken just outside the front door of his place of employment. And, taking this second photograph of Lula and Wall, treating it the same way with PhotoShop as I had done to the other picture, I could see on the doormat the last three letters of the conclusion to the label, “Bank of —.” Whatever the name, I could now tell the mat was labeled, “Bank of —ter.”

Finding the dots connected between the mysterious “Wall” Smith and the Lula Childers I knew to be my grandmother’s friend, it now opened the way for me to muddle through the other two photographs with that same border design. Though they contained no surnames in their labels, the clues from these first two photographs were enough to get me started on another productive search.
© Copyright 2011 – 2022 by Jacqi Stevens at 2:47:00 AM
Email ThisBlogThis!Share to TwitterShare to FacebookShare to Pinterest
Labels: Davis, Florida, Friends of the Family, McClellan, McKinnon, Moore, Unidentified Faces, Unidentified Places