Sometimes, it helps to pay attention to the friends and neighbors of the family member you are researching. You never know when the one you presumed was a mere acquaintance will turn out to have been a lifelong confidante.

About the same time I noticed the clues that helped me resolve the mystery of what the “Wall” meant in the name “Wall Smith,” I saw another mention of that same Childers surname. It was in the newspaper clipping from The Fort Meade Leader I had referred to a few days ago. Remember the mention of the teacher who also was in attendance at the high school reunion? And the graduate from the prior year’s class at Fort Meade High School?

Both those ladies happened to bear the name Childers:

Also on hand for the get-together on Wednesday were Hazel Finney Childers, a home economics teacher who was on the faculty in 1920; and Lula Childers Smith from the Class of 1918; and Mrs. Carrie Dodson, who graduated in 1920, but was an usher for commencement exercises of the Class of 1919.

Incredibly, the Childers hint was lost on me, so focused was I on writing about my grandmother’s reunion celebration!

Another little giveaway to the family connection: the very marriage document I just found yesterday. If you notice, on the line where the witnesses sign, there was a particular name, “Mrs. R. C. McClellan.”

McClellan, of course, was my grandmother’s maiden name. Her father’s name—the dentist and former mayor of Fort Meade—was Rupert Charles McClellan. He likely, as all good southern gentlemen were accustomed to doing at the time, went by his initials, R. C. McClellan.

After Rubie McClellan graduated from high school, the family moved to Tampa—most likely for professional reasons for Rubie’s father.

Who knows? Perhaps the Tampa-born Wall Smith crossed paths with either of the McClellans who, thinking of their good friends, the Childers family, back in Fort Meade, may have played a small role in connecting the forty-something bachelor with Rubie’s good friend and still-single school teacher, Lula Childers. Of course, I don’t know this. But there must have been some reason the couple requested Mrs. McClellan to fulfill that honored role.

Now that I got my bearings, as far as family connections went, I began to wonder about the Childers family. Perhaps it was not just a case of Rubie and Lula being good friends. Despite no longer living in the same town, perhaps the entire family still had an ongoing relationship.

One of the other mystery photographs in my collection—bearing that same marking as yesterday’s photos, “March 1949”—was labeled “Reubin and wife.” 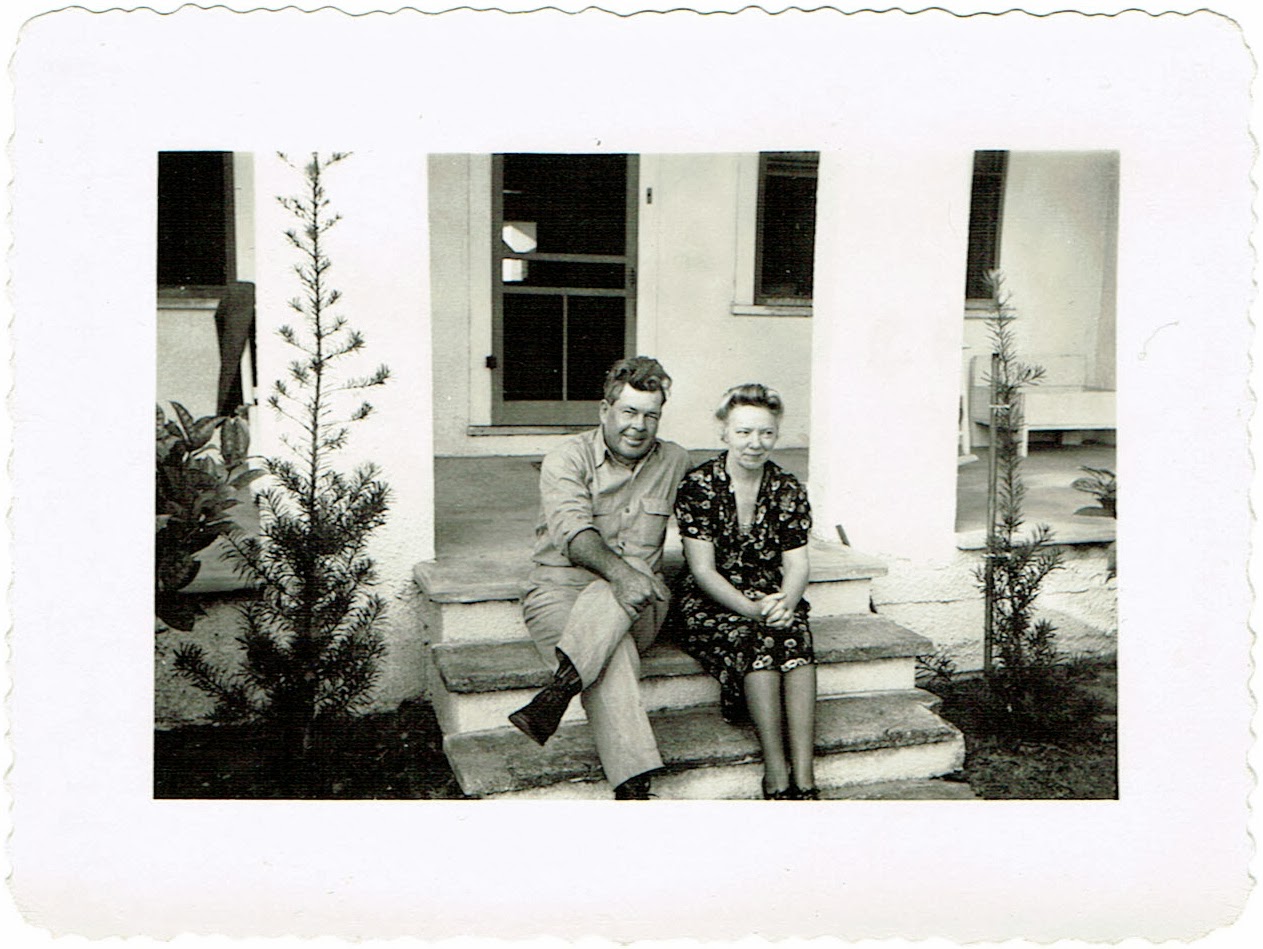 What were my chances that Lula had a brother named Rueben? Pretty near one hundred percent, judging by the 1920 census. Apparently, Lula was still living at home in Fort Meade, along with her mother and brothers Pinson, Reuben and Leland.

Pinson, as it turns out, was the Childers who married Hazel Finney, the former home economics teacher on the staff of the local high school who had attended Rubie’s high school reunion in 1977.

And Reuben and his unnamed wife? She apparently was the former Aina T. Persson, who promised Reuben Childers “I do” on March 24, 1934.

While I still can’t figure out what the occasion might have been in March, 1949, for which my grandmother had made the trip to Florida—it wasn’t, apparently, either Reuben’s wedding, or Lula’s (though it came close)—it must have been for some sort of special event. The last photograph for which its clues fell into place—labeled “Reubin’s (Fort Meade) March 1949”—showed what appeared to be three couples, nicely dressed, standing in front of what likely was Reuben Childers’ own home. 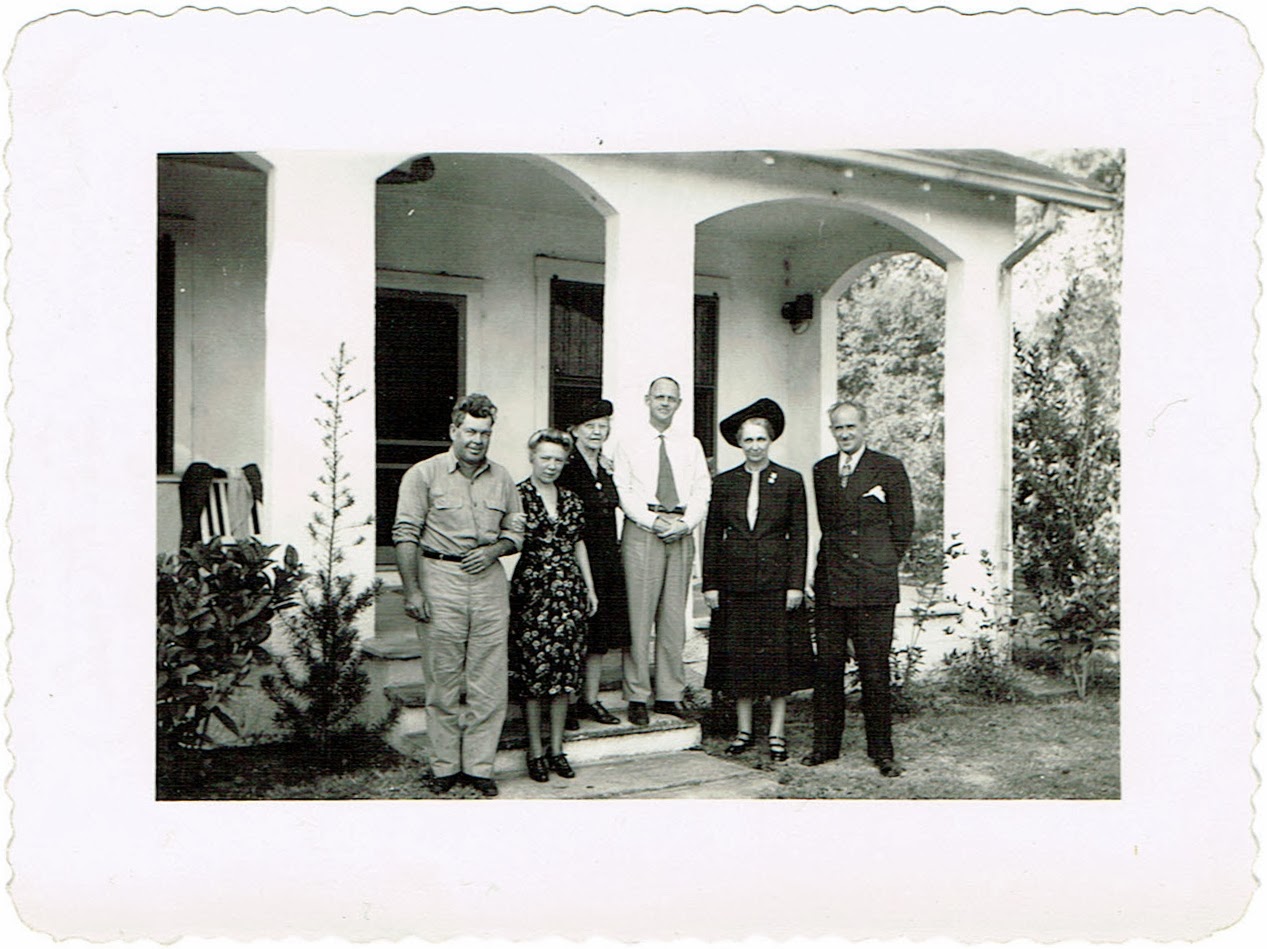 While I can’t be certain about the identity of all six of those people, finding a few clues here and there along the research way certainly helped me understand more about this set of photos. There, in that last photograph, stood the ones I now knew to be Reuben and Aina Childers and Wall and Lula Childers Smith.

The couples don’t line up exactly right, though. When I enlarged the picture to see greater detail, I was almost sure the man to the far right was actually Rubie’s husband, my grandfather Jack R. Davis. If you look at the shoes of the woman to his right, you’ll recognize them from the picture yesterday of Lula and Wall—making the woman standing next to Jack, Lula. Wall is to the other side of Lula.

That leaves yet another mystery: who is the woman between Wall and Reuben’s wife Aina? It isn't my grandmother—she is most likely the one taking the photograph. And no, I won’t be revealing an easy answer in tomorrow’s post.

Unfortunately, that is how mysteries unravel: not all at once, and not even in a steady progression. But I know if I set this puzzle aside and give it time to breathe and grow, the next time I pick it up to tackle that question, there likely will be another hint staring me in the face and daring me to chase it.

You can be sure when that happens, there will be another post written up and waiting for you to share.
© Copyright 2011 – 2022 by Jacqi Stevens at 2:43:00 AM
Email ThisBlogThis!Share to TwitterShare to FacebookShare to Pinterest
Labels: Davis, Florida, Friends of the Family, McClellan, Newspaper Clippings, Unidentified Faces