And What Was He Doing There ?

Since my godmother’s father, Michael Melnitchenko, was a sailor, it would be natural to expect him to live near a seaport. Granted, for the early years of his working life, that seaport was in his native land, somewhere within the realm of the former Russian Empire. Later, it was at the scenic Mediterranean seaport of Marseilles, France. When he moved to the United States—even after retirement—he still stayed close to the ocean, living in New York City.

So…what was he doing, living in Pennsylvania in 1942?

It was a World War II draft registration card that tipped me off. For the longest time, I discounted the entry that popped up in my searches on Ancestry.com because it was indexed under the name “Michael Juan Melnitchenko.”

Juan? Talk about cross-cultural! I didn’t think that would be my guy, and never took a peek.

I hadn’t thought about the possibility that the name “Ivan” could have been written in such a way that someone would have mis-read it as “Juan.”

That minor detail aside, I also hadn’t entertained the possibility that someone who gained his livelihood from the sea would be living in western Pennsylvania.

Inconveniently, the details matched up all too neatly. The first name, Michael, and last name, Melnitchenko, coupled with an Americanized version of the patronym for “son of Ivan,” were handily all there—well, if you morphed that doubtful “Juan” into a more reasonable “Ivan.”

The birthday was even correct: all other documents I had found convinced me the proper date was January 11, 1897. And the place of birth was a rough phonetic equivalent of the entry I had found in a few other documents for Michael’s hometown in Russia.

But why would Michael Melnitchenko, the Russian immigrant to France, be filling out a draft registration card in the United States? And why would he be living and working in a place called “West Hickory” in Forest County, Pennsylvania?

According to the registration card, Michael was employed in an unlikely place called West Hickory Tanning Company. He gave, for his most trusted contact person, someone by the very un-Russian name of R. R. Smith, another resident of the mysterious West Hickory.

Michael had registered in a local draft board in the nearby city of Pittsburgh. The whole scenario was so incredibly out of place for me that I couldn’t help but dismiss it out of hand. The only excuse I could come up with for its existence was the idea that it would be a risky business to keep going out to sea in an enemy-infested realm in the north Atlantic.

But why leave New York to take such an uncharacteristic job as what he found on the far side of Pennsylvania?

Those were the types of questions I struggled with—the questions that led me to just set the whole issue aside and forget about it—until I found the passenger list containing that one name entered on the return trip from delivering “vital military cargo” to a port in northern Africa.

I had to revisit the narrative, from the award notation for Captain Erich Richter on the U.S. Merchant Marine website, to check the details of the voyage. The ship upon which Michael Melnitchenko had been serving as Chief Officer—the soon-to-be-torpedoed S.S. Richard Olney—had set sail some time before its demise on September 22, 1943.

Naturally, knowing Michael’s home base at the time to be in France, I would have presumed the answer to have been “Yes” only if the stop were for shore leave for a limited duration. That, however, was not the case. Though the “Where” was answered “N.Y.,” the duration was listed as a much longer fourteen months.

Michael’s last given date of departure from New York was listed as August 5, 1943. Could that have been when the Richard Olney set sail on its mission? His passage was listed as paid by the W.S.A.—the War Shipping Administration.

What about those previous fourteen months in the United States? That would have brought him back to at least June of 1942, just a couple months past his stint in West Hickory in Forest County, Pennsylvania, at the date when he completed his draft registration card.

Had he really been working at a tanning shop in west Pennsylvania all that time he claimed he was in New York?

Grasping for any clues at all, I noticed the registration card included the man’s signature.

Once again, I revisited another signature page I had found to see if they matched. Granted, that other resource was the document in which my Michael Melnitchenko had just petitioned the Southern District court in New York to change his name during the naturalization process on this exact day today, sixty two years ago. 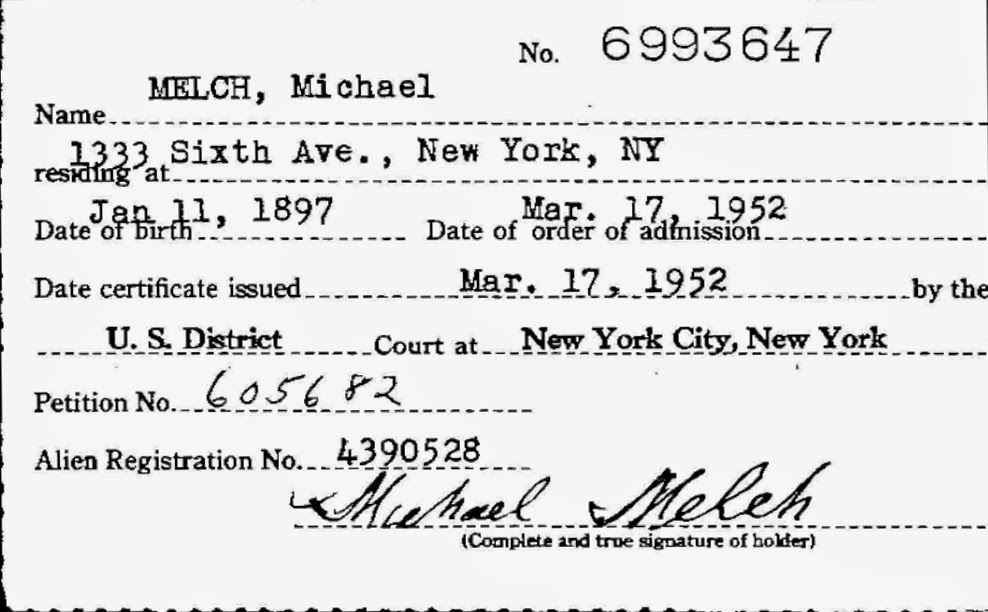 His hand was still uncertain as it navigated the unfamiliar Melch surname. But the entry for his first name, Michael, looked promisingly similar.

I was beginning to wonder if Michael Melnitchenko was leading a double life.
© Copyright 2011 – 2022 by Jacqi Stevens at 2:43:00 AM
Email ThisBlogThis!Share to TwitterShare to FacebookShare to Pinterest
Labels: Documentation, Friends of the Family, Immigration, Melnitchenko, Naturalization Records, New York, Occupations, Passenger Records, Wars