Searching For the Beginning 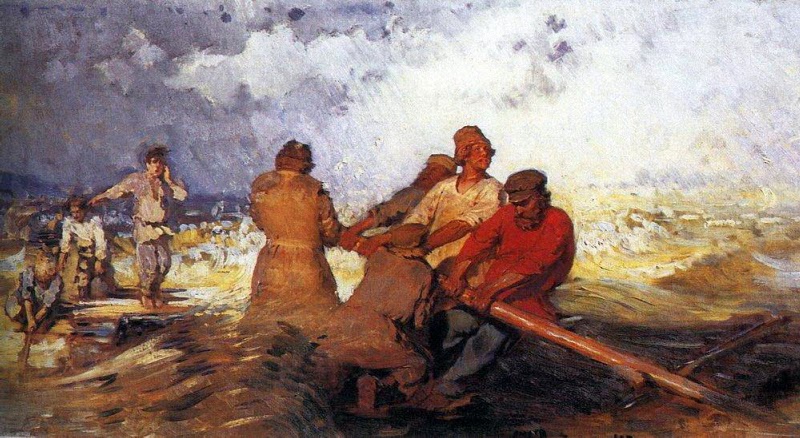 In researching my godmother’s Melnitchenko family, my hope was to locate the family’s origin in Europe. Of course, I was well aware that my godmother had been born and raised in France, but I knew France wasn’t where the family was from. The Melnitchenkos always claimed their heritage was Russian.

While to get the full story will require me to send to New York for immigration papers, I had hoped, in the meantime, to find at least a few more clues about where the Melnitchenkos first lived.

When I found records in New York matching the description of my godmother’s father, Michael, I was so pleased to discover at least one of them had included a place of birth. That document was the passenger list I later posted about last Sunday. Among the other surprising tidbits that unusual listing had provided, the form bore record that seaman and ship’s chief officer Michael Melnitchenko had been born in “Necolaeff, Russia.”

Immediately upon finding that, I flew straight to a list of Russian city names. Bearing in mind the fact that Russian place names over the last century have undergone changes, I hoped for the best. One name on the list I found seemed to be a phonetic approximation of the city name I was seeking: Nikolayevsk. A small town in Volgograd, the only problem it came with was the fact that it wasn’t anywhere near a seaport.

Granted, it was on the banks of the Volga River. But I had my doubts. Sailor Michael Melnitchenko needed a seaport to make his life’s story seem more consistent.

It was at that point in my research in preparation for these posts that we began discussing seeking family roots via origin of surname types. That was when reader Intense Guy sent information on a book about the Ukraine, and I Googled the origin of names ending in “–enko.”

As you have probably realized in your own family history research, many documents bear the name of a region based on its current geopolitical circumstances. Thus, those researching the Alsace region may find their ancestor born in “France” in one record, then ten years later, the birthplace will be listed as “Germany”—same place, different regime.

Perhaps that very dynamic was operating in the Melnitchenkos’ early years. Their origin was always listed as Russia, when in fact it may very well have been Ukrainian, instead.

As it happens, in addition to the doubtfully-situated city of Nikolayevsk, Russia—though phonetically close enough to match the record I’d found of Michael’s birthplace—there was a similarly-named town in the Ukraine. A place known as Mykolayiv was sometimes—especially in Russian—also called Nikolayev, handily approximating the phonetic rendering given by Michael on that 1943 passenger list.

Of course, back in 1943, that Nikolayev would have been under the control of Soviet Russia. Even in the 1920s, when the Melnitchenkos likely left their homeland, Nikolayev would have been part of the new Soviet Russia. It was likely that the famine that followed the Russian Revolution may have played a part in the Melnitchenkos’ decision to emigrate.

And, to complete the picture in a more convincing way, we find that this Nikolayev was located on the coast of the Black Sea—a suitable situation for a sailor like Michael, and yet another confirmation that the more likely place to continue this search is in the Ukraine and not in Russia.


Artwork, above left: "The Storm on the Volga," 1870 painting by Ilya Repin; courtesy Wikipedia; in the public domain in those countries with a copyright term of life of the artist plus eighty years or less.
© Copyright 2011 – 2022 by Jacqi Stevens at 2:42:00 AM
Email ThisBlogThis!Share to TwitterShare to FacebookShare to Pinterest
Labels: Friends of the Family, Melnitchenko