I live near a quaint downtown area, full of antique shops, outdoor cafés, blocks-long summertime farmers’ markets—a place with a lot of community cohesiveness. While it’s not the city in which I live, I love driving there for everything from a well-crafted loaf of fresh bread to a good cup of coffee with a friend.

That particular town didn’t always have such a chic ambience. In fact, the ’70s mantra the place found itself embarrassingly branded with came from the refrain from the B-side of Creedence Clearwater Revival’s Bad Moon Rising: “Oh, Lord, stuck in Lodi again.”

Admittedly, back in 1969, when the song was first released, Lodi was a dumpy little agricultural community. Over time, though, things can change.

I suppose it may be just the same for the apparently maligned village of Paris in Brant County, Ontario, that we’ve been discussing. Of course, I’ve never been there, so I wouldn’t know. My interest in this village of Paris isn’t for the present, however, but for the past. Judging from the many historic photos collected for sharing on the Internet—and via books for purchase, too—this little town has a sense of place, as well.

Paris—the one in Brant County, that is—has one thing going for it, at least as far as my family history research goes. It was the home of the county’s first Catholic Church.

As you can imagine, our family’s Tully ancestors, arriving from Ireland, were quite pleased to discover that fact. While I’m not certain exactly when the Tully family arrived in Canada West—I can find no passenger records yet—I do know they were included in the1852 census. And that census record confirms that their youngest son, William, was born on Canadian soil two years prior, yielding 1850 as my best guess for their arrival.

By the year of 1850, Paris already had established its Catholic parish. According to a brief overview of the church’s history on the church’s own website, the Catholics in the region had gathered together to vote on their preferred location for that first church back in 1834. Paris had won as the selected location by one vote, thirteen to twelve. That gives you an idea of the size of that initial congregation.

By 1837, the proposed church had received the deed to its property and building commenced, with doors to the new Sacred Heart Church opening about a year later.

Thinking of all the Tully family members likely to have attended that parish well over ten years after it was established, one would presume things would have settled down to some fashion of organization to properly keep essential documents by 1850. Yet, as some distant Tully cousins with whom I’m working discovered, sometimes those earlier records have a way of vanishing.

I’ve mentioned our meeting with these third cousins, last summer during our most recent trip to Chicago. After we got together in August, one of the cousins sent me a copy of the response she had received to her inquiry about these early Tully relatives from the Sacred Heart Church in Paris. It got right to the point with an opener that was quite disappointing:

After going through many years in our early records, I find no mention of…

The letter did contain some information on a few baptismal records, but those were for later family members whose dates we already had verified from other sources. An almost apologetic close to the letter reminded us, “Very hard to read the old records.”

Where could we find any documentation for those old family records? What about “Mrs.” Denis Tully, who had to have died in Paris sometime between the 1852 census and that of 1861? And what became of her husband, Denis, whose sons had moved to the States by the time of the 1870 census? Would he, as an elderly man by that point, have moved to Chicago or Detroit with them? I find no record supporting that. My guess is that we would find him in that Paris cemetery.

Granted, online cemetery records—such as Find A Grave—are sometimes scant in the data captured for a given cemetery. In the case of Sacred Heart’s cemetery in Paris, Internment.org included a more thorough list—but even that could have been incomplete. How would I know?

Admittedly, I already have that magic slip of paper that directs me to bypass Canada and move directly to Ballina in County Tipperary, Ireland. I don’t need to be “stuck” in Paris. Before I go skipping out on the small town of Paris in Canada, though, I’d like to see if I can discover any more about the Tully family’s stay in Ontario. Family history, after all, is about so much more than just names and dates. I want to know about these ancestors’ lives. 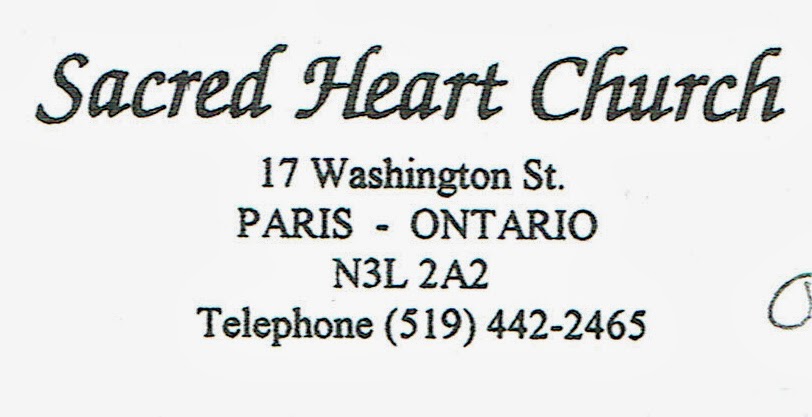