Blame it on an Ink Blot

As a sufferer of the “ooh, shiny” syndrome, I often need an alibi for the embarrassing symptoms of my malady. Today, I’ll blame it all on an ink blot.

I’ve been puzzling over how to handle tracing my Tully line back in time from Chicago to Ontario and ultimately all the way to Ireland. You certainly understand how difficult it can be, having to research names like John or Mary in a place like Ireland.

I decided my strategy would be to piggy back on the vehicle of a relative with a more unusual name. I found that name, literally, under an ink blot in the Canada West census for 1852.

There, just eighteen scant lines below my Denis Tully family in Paris, Ontario, was a Flannery family.

You may recall that I had discovered—almost accidentally—that Denis’ wife, listed as “Mrs.” in the 1852 census, was actually born Margaret Flannery. As you can imagine, any Flannery family living this close to my Tully family—especially so far from their original home—would be of great interest to me. 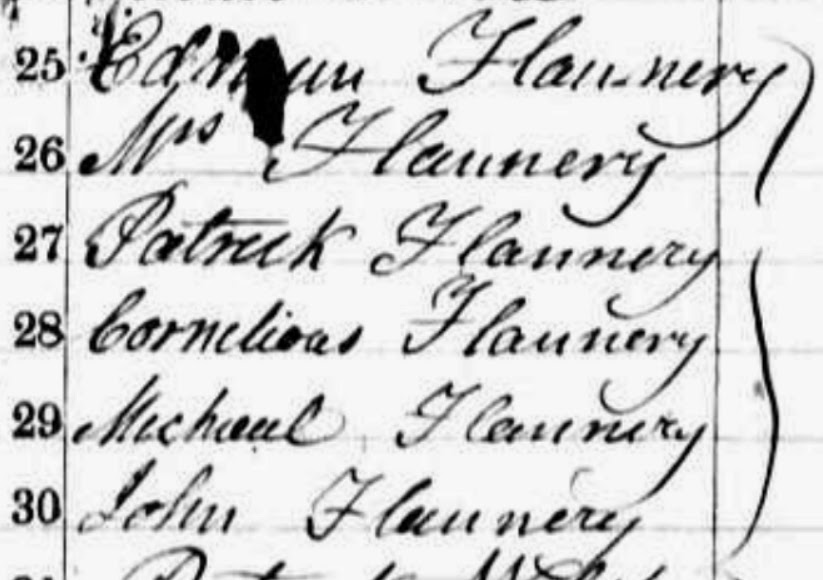 And it was. Except that I couldn’t read the given name of the head of that Flannery household. It looked like “Edman.” Or, possibly, that “m” was actually a “w” and the man’s name—but for the slip of a letter—could have been Edward. I couldn’t really be sure, because right in the middle of the name, census enumerator John Sinclair’s otherwise stellar handwriting was besmirched by an errant ink blot.

Without the corresponding wife’s name to serve as an alternate guide to the parents’ generation, I was left with the names of his four sons to obtain hints about how to research this family. When I took a serious look at those sons’ names—seeing the usual Irish lineup in offerings such as John and Patrick—I was about to despair of finding a way back to the Emerald Isle.

Until, that is, I found Cornelius. That, I thought, was a name I could grab and run with.

I ran in both directions—seeing, first, if I could snag any early returns from a foray into Irish documents, then reversing gears and looking forward in time, attempting to locate any descendants. While the peek into Irish records yielded some promising results, seeking more recent Canadian records left me clueless. Apparently, Cornelius Flannery is not as rare a name as I had at first presumed.

The questions occurring, thanks to that small experiment, make me wonder about the possibility that Cornelius and his Flannery kin left Canada for cities south of the border in either Detroit—as had their Tully cousin, Michael—or in Chicago, along with John Tully’s family.

In the guinea-pig spirit in which this blog was first launched, I’ll share the beginnings of my foray into hypothesis testing tomorrow, when I check the possibilities found in both those state-side locations.