As I work my way back through time, following the various branches of my maternal side to the far reaches of colonial America, it begins to dawn on me that those roots may well connect me to Scots-Irish emigrants.

Should this turn out to be true, I can’t help but think—considering our family’s long-awaited trip last fall to research my husband’s Irish ancestry—how ironic it is. After all, here we are, husband and wife—he being son of a man whose eight Catholic great grandparents were all born in Ireland, I being someone of a distant heritage from the other, Protestant, side of the island. Orange and green, all wrapped up together in one household.

And we live to tell of it.

We’re not really Irish, ourselves, however. Though my husband can claim three great-grandparents born in Ireland, every subsequent generation before him was born on American soil—Lafayette, Indiana, or Fort Wayne or Chicago, to be specific.

Just before traveling to Ireland last October, he stumbled across a book which tipped him off to the possibility that the Irish might not welcome with open arms the returning “Irish” descendants, arriving on the Old Sod with the fervent hope of finding something more about their roots. It was in McCarthy’s Bar, Pete McCarthy’s “Journey of Discovery in Ireland” that my husband was enlightened as to the best approach to take on his own journey.

As we traveled the countryside, trying to locate the townlands where my husband’s ancestors originated, he would tentatively try out his newly-devised research approach with this ice-breaker:

As you can tell by my accent, I’m not from around here.

If he would be awarded even the faintest glimmer of a smile, he would continue his explanation.

I’m probably best described by my favorite Irish author as being one of those dewy-eyed Yanks wandering the countryside, searching for his roots.

The “favorite Irish author,” of course, would be Pete McCarthy—which, in itself, was halfway inaccurate. But what were the chances that someone would spot that? It’s been over ten years since the book was published.

From that point, my husband would explain that all eight of his father’s great-grandparents were born in Ireland. If the unsuspecting bystander whom he was accosting with all these details hadn’t yet escaped, my husband would then find himself in a lively conversation about whatever question he was pursuing. We met a lot of cordial, receptive people that way, friendly people most willing to help us in our quest. However, we did notice how the soft introduction helped.

I’m not sure what the perception has been, on the other end of the exchange. I have, since then, stumbled upon a few clues that the Irish—the truly Irish, the ones whose birth certificate justifies their claim of Irishness like nothing else could—don’t look quite so favorably upon our romanticized view of the matter as we do. I had first found such an indication, right after arriving home from our trip, in a blog post by an Irish-Canadian historian living in America.

Just the other day, while working on another project, I ran across another indication. I was considering the topic of Irish immigration to the United States, and in seeking some quick statistics, was trawling through the Wikipedia entry on the topic. What should I find there, but a reference to a term that, regardless of all that I’ve mentioned above, still took me by surprise.

The term was “plastic paddy.” According to Wikipedia, it is

A perjorative term for members of the Irish diaspora who appropriate (often stereotypical) Irish customs and identity…on the basis of their perceived lack of authenticity as Irish.

I suppose it is only in America that we can find people who claim to be “Irish”—or Italian, or German, or Greek—but simultaneously insist that they are Americans. Perhaps such “Heinz 57” claims can only be understood in the context of our American heritage. Of course we aren’t Irish—or Italian, or German, or Greek—if we claim American citizenship.

On the other hand, that is how we see ourselves, we Americans: by virtue of our heritage. We define ourselves by where we came from. And together, from Ireland—and Italy, and Germany, and Greece—we celebrate what we remember of our past, that long-past of preceding generations that we know only because a parent taught a child who grew up to teach it to their children.

It’s in a country of immigrants like ours that we can all “be Irish” for a day like today—celebrating in a way that may very well cause some real Irish to turn away in disgust. “What do they know?” they may be thinking. We have co-opted their heritage.

By that same token, we are the ones who can turn around and celebrate Cinco de Mayo, or dance the tango, or eat sushi or pad thai or knishes or pierogi—even if we aren’t from Mexico, or Argentina, or Japan, or Thailand, or Poland.

Knowing that not everyone knows what we know can be an eye-opener. While at first, I thought it an affront to discover that the Irish might not have appreciated my appreciating the Irish, I’ve appreciated the learning experience.

On the other hand, as I noticed when dining at an Italian restaurant in Ireland run by Romanian immigrants, what we have long come to expect as normal in the American land-of-the-immigrant is now becoming the norm in other parts of the world, too. While the Irish—and the recently-Irish—may look down their noses at those of us who merely thought we were “Irish,” we Americans may be entertaining a secret glee at observing the cosmopolitanization of those pure-green shores we had, so long ago, left behind. 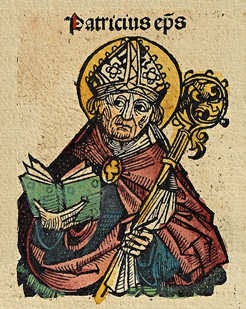 Above: Saint Patrick, woodcut from the Nuremberg Chronicle, 1493; courtesy Wikipedia; in the public domain.
© Copyright 2011 – 2022 by Jacqi Stevens at 2:43:00 AM
Email ThisBlogThis!Share to TwitterShare to FacebookShare to Pinterest
Labels: Holidays and Genealogy, Ireland