I don’t know how life is treating you right now, but here in California, we are having what can only be described as perfect Spring days. Hush, you who want to bring up the obvious—“But we need the rain!”—and just enjoy what we have now. No sense grumbling about current blessings.

The same seems to go for my online sniveling about missing pages in genealogical books I want to study. There is always a way around a roadblock, even in family history research.

I’m not exactly sure how to target my gratitude right now, but I’m certainly glad there are several organizations out there, pursuing the mammoth project of digitizing a universe of diverse publications. Specifically, while I tend to prefer the Internet Archive resource, I’m glad there is also an entity known as HathiTrust.

As I suspected the other day, HathiTrust did indeed have the 1911 volume I was looking for: The Tilson Genealogy  by Mercer V. Tilson. And thankfully, they hadn’t used the same source copy to do their scanning. The missing pages 37 and 38 were right where they belonged.

That means I can read up on the 1714 will of Ephraim Tilson of Plymouth County, Massachusetts, which detail filled almost the entire first of the missing pages. Then, I thankfully could continue the genealogy of the Tilson line with Ephraim’s son Edmund—the next step in the direct link between the Tilson immigrant Edmond and me.

More importantly, the missing pages detailed Ephraim’s married life and which of his children belonged to which of his—count them, now—four wives.

It’s a good thing all that detail was provided—more importantly, that I was able to find it in a second digital resource—for my direct line descends from not the first, not the second, not even the third, but the fourth wife, Deborah Caswell. Of her two children with Edmund Tilson, the oldest—Stephen Tilson, born April 6, 1717—is my direct line. His entry doesn’t appear until almost the end of page 38—and then doesn’t reappear until his own family is listed on page 147.

From there, I can easily pick up the narrative with Stephen’s son William—whose family entry is directly below his father’s—and then to Peleg Tilson, William’s son. That is my fourth great grandfather.

It was during those two generations—that of William and Peleg—that the line moved from Massachusetts to Virginia, and then ultimately to Tennessee. While that seems like an extraordinary distance—and one traveled over rough terrain, undoubtedly—for times such as the mid-1700s, there was an explanation for how the move came about.

The end result also provides some small details on how the family came to settle in such a small and seemingly obscure place as Erwin, Tennessee—the very place where the family remained up to, and even beyond, the time of my grandfather’s birth and childhood. 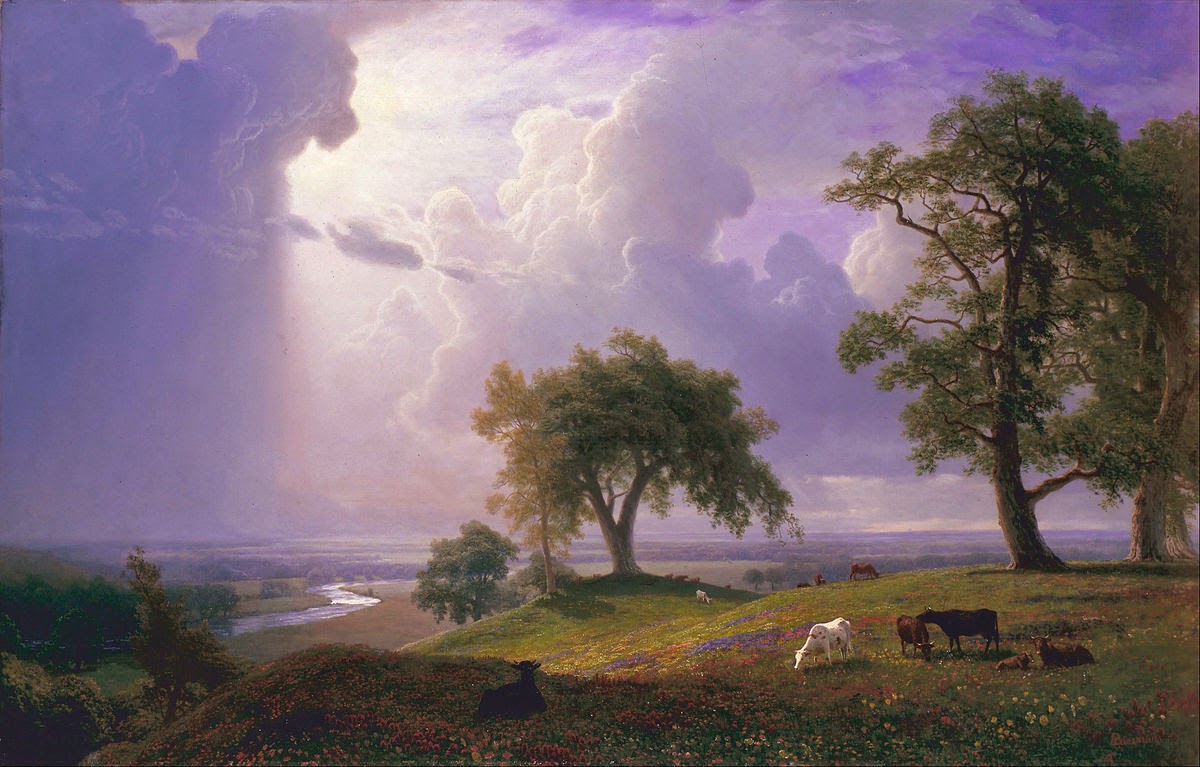 Above: 1875 painting by Albert Bierstadt, "California Spring" looks pretty much like the usual springtime view from the foothills east of California's great Central Valley--all except for the clouds, that is, owing to our current drought conditions. Courtesy Wikipedia; in the public domain.
© Copyright 2011 – 2022 by Jacqi Stevens at 3:01:00 AM
Email ThisBlogThis!Share to TwitterShare to FacebookShare to Pinterest
Labels: Books, Online Resources, Tilson