An Uncle I Never Met

John Laskowski must have been a steady guy. Firstborn son of Anton and Mary Laskowski, he arrived in the family’s Polish household in August of 1880. Along with the rest of his family—his two siblings Michko and Sophia arrived in short order—he made the trip west to a German port and then aboard a ship bound for America. By the time of the 1892 New York State census, he was living with his family in an apartment in Brooklyn.

John seemed to be the solid type who latched on to tradition and held fast. He found and married a Polish girl from the neighborhood where he grew up—“Blanche” Aktabowska—and raised the customary large Catholic family of at least six children.

Unlike either of his siblings, John kept the surname he arrived with. It wasn’t hard to find him in any of the subsequent federal census enumerations, or the available state census records. Working as a common laborer, he lived the rest of his days in his adopted homeland—varying the location only so much as to move from one New York City borough to another. His 1930 death being registered in Manhattan may only be a factor of which hospital he was taken to; his last noted residence was in Queens.

In sharp contrast, my grandmother—his sister Sophia—seemed to want to have nothing to do with her outmoded Polish roots. Though she may well have married a good Polish boy, there was nothing left of that telltale surname sign to alert me to the fact. Gone was the Polish surname. In its place arose a solid, respectable Irish name. Even the “Sophia” was gone—my grandmother opting for the more modern (or at least American) sounding “Sophie.”

Likewise, Sophie’s younger brother shed the telltale “-ski” from his surname, and disappeared into the American melting pot, allegedly under the name of Lasko. The “Michko” nickname showing in the 1892 census evolved into the more acceptable “Michael.”

It took a lot of searching—coupled with futile prying into the sealed family business that the older generation seemed to have vowed never to reveal—to even discover that Sophie had a maiden name, and that it was Laskowska. Even acting upon the hunch that the surname might have been shortened in Michko’s case, I still haven’t been able to locate a reasonable possibility that might have been him.

As for John, thankfully his rock-like resolve to not shed his identity allowed me to at least trace his side of my father’s family. Every step of the way, I kept myself anchored in John’s routine appearance in records, hoping—hoping—he would someday cross paths again with his siblings and alert me to their whereabouts as well.

I don’t know why this happens, but sometimes, chance events can catch our attention and make us remember—and reconsider—tasks long since set aside. I’m sure glad that was the dynamic that occurred when I spotted Randy Seaver’s post on the latest New York City record additions at FamilySearch.org. That post tickled my memory, and I soon found myself playing the “what if” game online with New York City records again.

I didn’t even let myself get frustrated when the usual disappointing lack of results hit me again while trying my hand at either my grandmother’s or Michko’s data. They are simply not there to be found, much as I discovered years ago when trawling through microfilms or even in the earliest years of online genealogy at places like the Italian Genealogical Group (it’s not just for NYC Italians, you know).

When it came to John, however—the one who was always there, leaving me signs of his whereabouts every ten years—I encountered a surprise so stellar, it nearly took my breath away.

I found his immigration records. 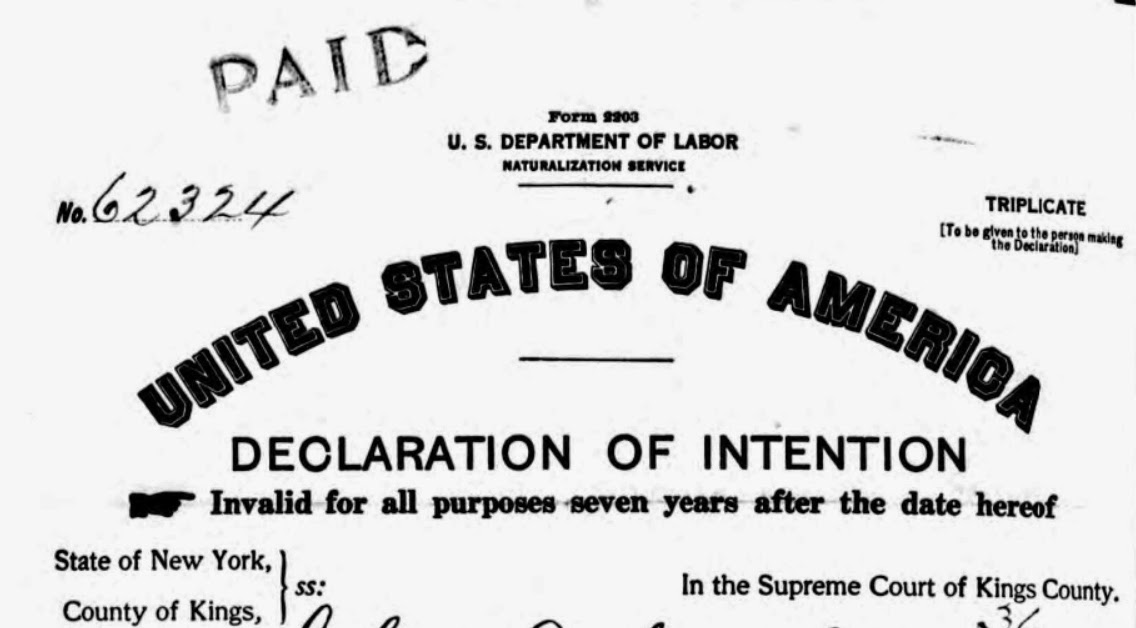 © Copyright 2011 – 2022 by Jacqi Stevens at 2:46:00 AM
Email ThisBlogThis!Share to TwitterShare to FacebookShare to Pinterest
Labels: Immigration, Laskowski, New York