Just-found records can certainly provide the precise infusion of data needed to revive a fruitless genealogy search. Finding my old files for my Flanagan, Lee, Tully and Malloy lines the other day was exactly what I needed, now that I’m getting ready for my first research trip abroad.

I knew for quite a while that William Flanagan was the connection between Johanna Lee and her family and Anna Malloy and her Tully descendants. We’ve been focusing on the Lee family lately, as I tidy up my records and see if I can push that brick wall back just one more generation. The hope is to juxtapose enough Flanagan names in Irish records to help differentiate the right family from all the others who seem to choose exactly the same names to bestow upon their children.

William Flanagan became helpful from a research standpoint because he was evidently not shy about proclaiming the exact spot of his origin: Parish “Ballygran” in County Limerick, Ireland. Of course, we’ve discovered his grave marker omitted a letter, and the location is actually Parish Ballyagran. But how much more pinpointed a marker could we hope for?

On the other side of the equation, the Irish didn’t seem to be too particular about not only dates but also spelling. William’s surname—even after his arrival in America—was handled alternately as Flanagan, Flanigan and a few other permutations. Juxtaposing any such Irish records with that of a sister named Anna might help. Add in an as-yet-unnamed brother (Johanna Lee’s father), and perhaps through the magic of triangulation we’ll find a match.

The sister, Anna, had her own spelling maladies plaguing her record. Her married name, Malloy—the spelling most similar to the pronunciation as given by the family—came with its own package deal: alternate renderings including Maloy, Mulloy, Muloy, Molloy and even Moley.

Regardless of what might be listed concerning these two in Irish records—should any of them still be in existence—I was fortunate to apprehend documentation of their new life in Chicago. In some cases, I’m specifically thankful that I captured—and I mean that literally—that documentation, for now that I’m retracing my steps, I am unable to provide proof on either Ancestry.com or FamilySearch.org.

Blame it on handwriting defying any attempt at proper indexing, perhaps, but I’m thankful that on August 29, 2003, I took a screen shot of the digital rendering of the 1860 census showing William and his sister, plus her teenaged daughter Catherine, in a household in the Fifth Ward of Chicago, Illinois. I have that trophy tucked away in my recently-found files.

There, in Illinois’ Cook County on microfilm roll 166 in book 1, page 98—if anyone even searches census records by those means anymore—can be found the fifth ward enumeration for 1860, including William, his sister Anna, and her daughter Catherine.

Although William gave an age placing his date of birth as 1820—certainly not the 1813 birth inferred from his obituary in 1893—there he was, residing with his sister and his niece. Though the 1860 census did not provide any written record of relationships within households, I know these family details from subsequent records.

At the point of Anna’s passing—and she was the first of the two to die—the connection to County Limerick was confirmed. Though difficult to read—it is indexed on FamilySearch as “Suninek County”—Anna’s death certificate also mentions the specific birth location in Ireland, same as her brother, and as we saw much later, same as her niece, Johanna Lee. 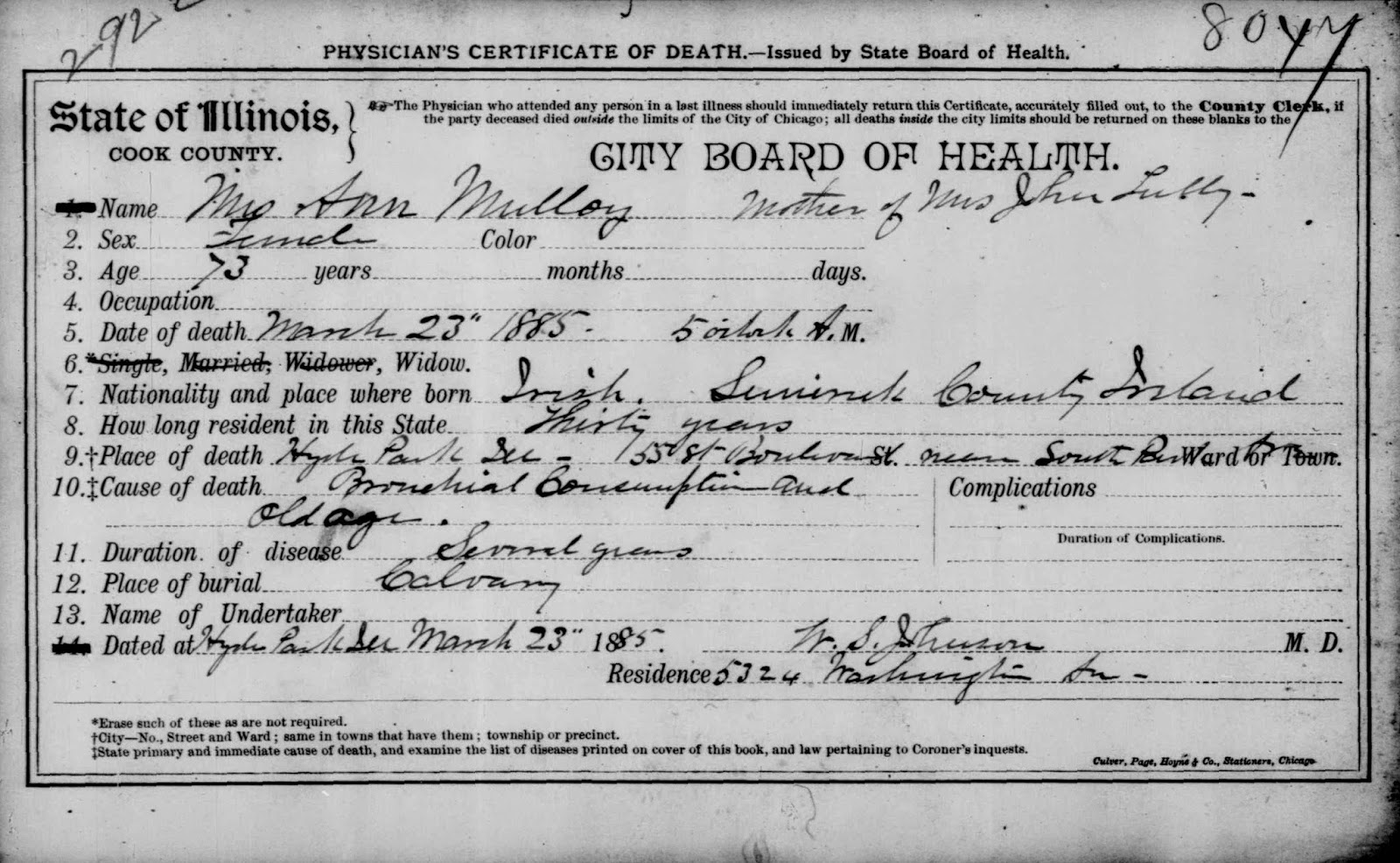 An example of the difficulty of chasing records with constantly-changing spelling variations can be witnessed in Anna’s own record. Though her death certificate was filed under the spelling of Mulloy, her obituary read as Maloy. Published in the Chicago Tribune on Tuesday, March 24, 1885, the page eight funeral announcement linked her to her daughter Catherine, by now Mrs. John Tully:

MALOY--March 23, at the residence of her daughter, Mrs. John Tully, corner of Indiana-av. and Fifty-fifth-st., Hyde Park, Mrs. Anne Maloy. Funeral Wednesday, March 25, at 9 a.m. to St. Ann's Church, by carriages to Northwestern Depot, thence by cars to Calvary.

What is even more helpful, in preparing to journey to the specific birth places of our Irish ancestors, is a letter that was once received by this very same Anne Maloy. While travelers on genealogical research trips hope to locate not just the county but the specific parish of their Irish ancestors, as we’ll soon see, the address on the envelope I’ve found is enough to direct us right to Anna’s very own front door.
© Copyright 2011 – 2022 by Jacqi Stevens at 2:44:00 AM
Email ThisBlogThis!Share to TwitterShare to FacebookShare to Pinterest
Labels: Cemeteries, Chicago, County Limerick, Documentation, Flanagan, Lee, Newspaper Clippings, Tully