The Rest of the Gift

Just over a month ago, I shared a story about an unexpected message I received from a student at a local high school who had found something of interest to me. This student, hanging out with some friends, had ventured into an antique store in town, where he stumbled upon several photographs for sale.

Since this student had an interest in genealogy, he thumbed through the photos to see if he could find one with a name or any further information written on it. There were stacks of snapshots, mostly from the 1950s onward, hardly of the type which would qualify as antiques. They were clearly from someone's family photo collection which ended up in the store due to some family misfortune.

Several of the photos were carefully labeled in the same steady handwriting, including one which showed the inscription, "Gregory Earl Bean/First Birthday/March 6, 1952." 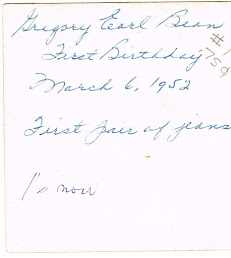 Of course, if I had thought to stop in at an antique shop in my own city to look for photographs—instead of traveling nearly one hundred miles away to find suitable rescue project candidates of my own—I would have instantly recognized my mother-in-law's handwriting. But of course I didn't; that would be too easy.

Thus it was that it took a high school student's diligence at, first, deciding to purchase the photograph, then taking it home and searching through records at Ancestry.com to see if he could locate any information on someone by that name and birth date, and finally, reaching out to return it to a family member.

The rest of that story I shared with you in a post almost exactly a month ago, when I met up with the student and gratefully received this photo from him. 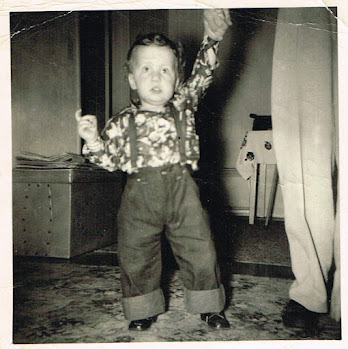 The photo was a companion piece to the one already in my possession, which I used, years ago, to introduce a series on this one-year-old's life story, beginning with this post here.

Enjoying a morning's coffee with this exceptional student and his mother, I learned one further detail about what that student saw when he found this photo: there were more photos still remaining at the antique store. A lot of photos.

I promised myself I would get to the shop to take a look for myself. I had a pretty good idea of what had happened. My mother-in-law lived with her daughter and her daughter's husband. After my mother-in-law passed away, of course her daughter was in no hurry to dispose of her possessions, and likely lingered over these tokens of past memories.

And then, unexpectedly, the daughter died, too. It then became her much older husband's task to decide what to do with the memories of someone else's family. He apparently opted to do nothing...until he, too, died. His children, from a previous marriage, likely had no idea who all these people were in that stack of photos. All they knew was that someone had to clear out a lot of possessions from a home, likely without the convenience of much time to consider best options.

That is probably the same type of story that gets played out in every city across America, year after year. Any estate liquidator probably has a set sequence to follow in such cases. Somehow, because they can sell as curiosities, such ephemera end up in antique stores where a chance customer may find a picture that just strikes her fancy, and the sale is closed. A family's treasure becomes a stranger's curiosity.

I eventually made my way across town to visit that antique store. In preparation, a friend of mine happened to know one of the women affiliated with that shop, and before I could do so, she stopped by to take a peek at the photos herself, and to pave the way for the photos to be held for me.

On the appointed day, we went together, along with my daughter, to view all the photos. The main goal was to determine which photos I might still want to have. Even though I knew this family so closely, I was surprised at the number of photographs that were in the collection.

The photos had all been removed from any albums, and were just contained in boxes. Many were black and white snapshots. Some were color photos, of which several were faded by time. So many included my mother-in-law's steady handwriting in notes on the reverse.

Some of the photos were duplicates of those I already owned, or were additional snapshots of the events in my own collection. As we flipped through the photos one by one, the scenes shifted from pictures of the 1950s to earlier decades. My mother-in-law's handwriting became replaced by notes written by others, by strangers. Some of the names I could place within the extended family tree, introducing me to faces I had never seen—faces of people whose stories I recalled from years of reminiscing with that family.

As my friend and I flipped through the pictures in the boxes, my daughter turned her attention to older photographs placed strategically around the shop—CdVs which were the type I like to find in my own photo-rescuing missions. She pulled one down from a shelf to read the label; it turned out to be a family member. We ended up scouring the entire shop to see what other portraits had been placed as "decoration" from this family.

At the conclusion of this mission, not only did I find some keepsakes, but I decided to add some photos to the purchase pile which were a mixture of names I knew and stories I didn't know. If I am going to be an orphan photo rescuer, I may as well share stories of the rescued photos from my own family. Who knows? Perhaps some distant cousins of this long-gone family will stumble upon one of the posts in the next few days and wish to receive these mementos from their past, as well.

© Copyright 2011 – 2022 by Jacqi Stevens at 2:49:00 AM
Email ThisBlogThis!Share to TwitterShare to FacebookShare to Pinterest
Labels: Bean, Family Photos