In the Name of the State


It may have been four years from the passing of George Edmund McClellan to the point, on December 30, 1870, in which his heirs decided to make official complaint about the delay in settlement of his will, but it took only one day for the Honorable John W. Rice, Suwannee County Judge addressed by the heirs, to answer. His response was decisive and emphatic.

"In the name of the State of Florida and by Authority of the Same," the heading proclaimed, then continued to address, specifically, Celestia R. Grant, widow and executrix of George McClellan's will.

It was only one day after Philip Lowe had written his letter of complaint on behalf of his wife and sister-in-law, daughters of the deceased George McClellan. They were still waiting, after four years, for the settlement of their father's business and properties, and it not only seemed that progress was not being made, but that their step-mother was rumored to have made plans to leave the state without distributing proceeds from the McClellan estate.

The judge, replying within twenty four hours, ordered the executrix to appear in court right after the new year, on January 6, 1871, "under penalty of the law."

This order would, of course, cause Celestia McClellan Grant to incur further expenses, as she surely would not appear in front of the judge without legal counsel, which expense would then, of course, be charged to the estate.

After all the pages and pages of account records, receipts, notes claimed and honored, letters from attorneys and other representatives—including old promissory notes with receipts attached, including some recording the payment in full in Confederate currency—once again, more review and inspection would have to be made. Reading through the hundred-plus pages of the McClellan probate case was indeed an eye opener into just what life was like for a busy man in the small town of Wellborn, Florida.

The review also provided an indicator of how intertwined the people in that town really were. Remember the mysterious M. A. McLeran, whom I suspected to be the Mary of the Legend of the Red Scarf? Apparently, George McClellan served as appraiser for several other probate cases of residents of Suwannee County who had died intestate, among them Mary Ann Charles McLeran's husband. Reference to George's work on the McLeran account was made, buried deep within the text of a letter I found in the McClellan folder.

And that will for George's first wife, Sidnah Tison, which the Ancestry shaky-leaf hints had promised was at the beginning of George's will? Nope, it was at the back of the folder, perhaps as an afterthought in the legal wrangling with executrix Celestia Grant. As if to say, see, this was originally our mother's property, given to us, not to be counted as part of George's estate, the several pages from Sidnah McClellan's 1860 passing were tucked in as an afterthought at the end of George's folder.

Not to say there wasn't anything about Celestia in the file. In fact, several items involved correspondence between Celestia's attorneys and the court—or Celestia, herself, and the judge—all, however, seeming to keep running in circles. Property was being put up for sale. No, that property shouldn't be sold. Why wasn't that property being sold? The court is ordering that it be sold to satisfy debts. And on and on.

Meanwhile, there was one little detail still to be seen: was it true that Celestia was planning on getting away from Florida? And if so, where was she going? 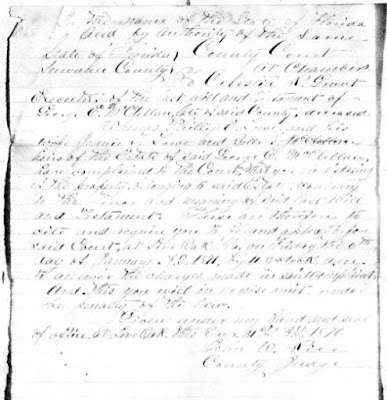 In the name of the State of Florida and by Authority of the Same,
State of Florida, Suwannee County, County Court at Chambers,
To: Celestia R. Grant
Executrix of the last Will and Testament of George E. McClellan, late of said County, deceased.
Whereas Phillip E. Lowe and his wife Jennie T. Lowe and Belle S. McClellan heirs of the Estate of said George E. McClellan, have complained to the Court, that you are disposing of the property belonging to said Estate, contrary to the tenor and meaning of said last Will and Testament: These are therefore to cite and require you to be and appear before said Court at Live Oak Fla. on Friday the 6th day of January A.D. 1871, by 11 o'clock and to answer the charges made in said complaint. And this you will in no wise omit, under the penalty of the law.
Given under my hand and seal of office, at Live Oak this Decr. 31st A.D. 1870
John W. Rice
County Judge