From Chicago to California


Now that I've returned from our family's trip to Chicago—and that significant detour to Fort Wayne for the FGS conference—it's high time to pull out that latest stash of old photos from my most recent trip to Gold Country. After all, it's been almost three weeks since my travel partner and genealogy mentor, Sheri Fenley, joined me to brave the smoke of distant forest fires to head to the hills of Sonora, California, where antique shops with ample stores of old photos beckoned.

The picture I have selected to launch this latest series of rescue stories just happens to be one from Chicago. And no, I didn't find the thing in Chicago. The photo caught my eye, right as I stepped in the shop at Antiques Etc., back home in California—2,076 miles from its origin in Chicago.

Something about the gaze of the subject I found nearly arresting, and I knew right away I needed to learn more about the woman's story. Besides, each abandoned photograph I rescue from its discarded position has a secondary story of its own to tell: just how it arrived from its distant origin to end up for sale in a store in the foothills of northern California.

For now, just say hello to Rachel Webb. I think you'll agree there is something arresting about those eyes. As for her story—and why those eyes seem to haunt me so much—we'll have to wait on that discovery, whatever it might be. We'll begin, tomorrow, to see if we can uncover more of Rachel's story. 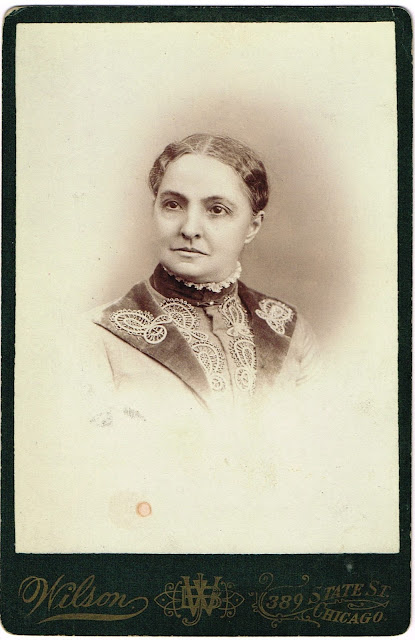 © Copyright 2011 – 2022 by Jacqi Stevens at 2:51:00 AM
Email ThisBlogThis!Share to TwitterShare to FacebookShare to Pinterest
Labels: Chicago, Family Photos, Webb