Take a step backwards and it will all fit in the picture clearly now. Take a step forward, and you can see, closely, all the details you need for your answer.

We took a step backwards, in our attempt to resolve the puzzle of just who my third great grandfather's parents might have been. Andrew Jackson Charles, living in the wilds of territorial Florida, had married Delaney Rosella Townsend in Madison County, just south of the Georgia border, in 1841, leaving a handwritten court record to document the event in what was then still the Territory of Florida. 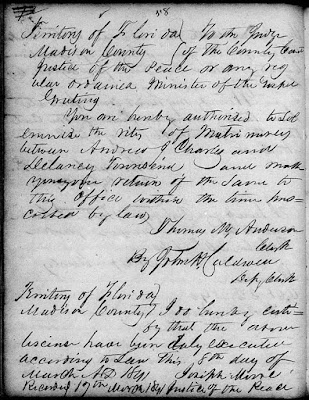 Andrew Jackson Charles remained there in Madison County through the time of the 1850 census, but because he was married and head of his own household by that point, we find no clue via the census to tie him to any other members of the Charles family.

We did know, however, that he had a sister named Drucilla. Though we discovered Drucilla's complicated life led her through a path of marriages and name changes, she was, thankfully, still single at the time of the 1850 census. We find her, at that point, in the Columbia County household of fifty year old Rebecca Charles (listed on the previous page of the census record).

Along with Rebecca and Drucilla, there were two other people with that same Charles surname: twenty two year old Mary A. Charles, and eighteen year old Reuben H. Charles. Of course, the name of this younger Reuben Charles is tantalizing, in sparking the conjecture that he might be son of the Reuben Charles of the legend we discussed last week.

More to the point, in connection with that same legend, is the fact that the household also included a young woman named Mary. If you remember, it was Mary of the household of merchants Reuben and Rebecca Charles who had run out the door to greet an incoming stagecoach, neglecting to wear her protective red scarf. Of course, Rebecca Charles and family had continued to operate their trading post and ferry service long after Reuben had passed away—at least until 1875, if the legend can be believed in at least this detail. As for the date of the impetuous Mary's demise, my source for the legend didn't reveal that information.

But was that unfortunate daughter killed for her forgetfulness? In following the paper trail documenting the family of Mary's sister Drucilla, not only do we find her marriage to Thomas Hughs Hines in Madison County in 1852, but her residence in the household of her second husband, Melburn Odum, in nearby Bradford County in the 1860 census. Yet no sign for Mary.

Census records for the various members of the Charles family didn't seem to include a Mary Charles for any of the decades I was able to locate. From her absence in these records, it would seem reasonable that she might have, indeed, been slain by a vigilant member of the local tribe.

But then I get to the 1900 census and the Columbia County, Florida, household of someone named Scarborough. In it was a woman by the name of Mary Charles. Prior to the details on her age and date of birth, we find the listing of her relationship: aunt. Who was this Aunt Mary Charles, and how was she connected to Matthew and Fannie Scarborough? Was this the missing Mary Charles of the legend of the red scarf?

To answer this, it takes another step closer to the details to ferret out our answer. Stepping closer always helps reveal those details.

© Copyright 2011 – 2022 by Jacqi Stevens at 2:44:00 AM
Email ThisBlogThis!Share to TwitterShare to FacebookShare to Pinterest
Labels: Charles, Florida