It was October of 1866 when the venerable George Edmund McClellan passed away. Still active in his community—he was only fifty eight at the point of his death—he left an estate including several properties in northern Florida, as well as numerous unfulfilled obligations. Perhaps not thinking things through clearly, he had determined to leave the responsibility for sorting out all these business transactions to his second wife, the former Celestia Relief Holman.

Because Celestia, widowed at that point in 1866, was a thirty three year old mother of two young children, she chose—barely six months later—to marry the sixty year old doctor, John Grant. By the time of the August enumeration of the 1870 census, not only had she given birth to the one child she had in common with Dr. Grant, but she was still serving as executrix of the estate of her deceased former husband, George McClellan.

With the passing of those four years with no settlement of the estate yet in sight, the McClellan heirs were understandably growing impatient. Perhaps it is no surprise to find, tucked in the McClellan probate file, a letter dated December 30 of that same census year. Addressed to the Honorable John W. Rice, judge of the Suwannee County Circuit Court, the letter was composed by Philip E. Lowe, husband of George's daughter Virginia.

The letter begins to reveal what might have become the root of a decades-long bitterness among family members. I'll let the letter unfold the problem for you in Philip's own words. 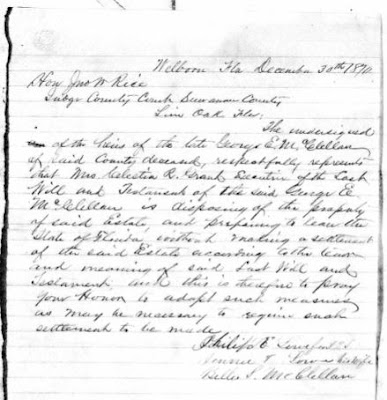 The undersigned of the heirs of the late George E. McClellan of said County deceased, respectfully represents that Mrs. Celestia R. Grant, Executrix of the Last Will and Testament of the said George E. McClellan, is disposing of the property of said Estate, and preparing to leave the State of Florida without making a settlement of the said Estate according to the tenor and meaning of said Last Will and Testament and this is therefore to pray your Honor to adopt such measures as may be necessary to require such settlement to be made.


The letter was signed by Philip E. Lowe. Below his signature were affixed the names of his wife, "Jennie" T. Lowe and his sister-in-law, Belle S. McClellan, by that point the only one of the McClellan daughters who had not yet married.