If the notes on the back of an undated cabinet card tell us that the subject of the picture lived at 93rd and Turner, I'd go check it out in other documents—wouldn't you?

Thankfully, we already know the picture of Rachel Webb—the woman whose photograph I found in an antique store in Sonora, California—was taken in Chicago. That little detail comes in handy when we realize the clerk's penciled in note about her address—93rd and Turner—doesn't include a city designation.

Next step? Check out any other way we can to find confirmation that Rachel Webb lived on 93rd and Turner in Chicago. Since we don't know the date of the cabinet card for sure (though we can presume it was taken in the late 1800s), and since we don't know the name of Rachel's husband for a cross-check in a city directory, the safest approach is to first consult a census record.

While census records don't tell us everything, they did provide addresses on their records from 1880 onward. However, we have no idea whether Rachel and her unnamed husband lived in Chicago for the long term, or whether they were recent arrivals—or, making this exercise even more difficult, just in town for a visit with friends or relatives.

Taking the address entry on face value, though, I decided to presume the address was that of the Webb residence. While a lot can happen in the twenty years between the 1880 census and the next available enumeration in 1900, I took a gamble on pulling up the 1900 census first.

That, as it turned out, was enough to provide our answer. Rachel and her family were listed at 9240 Turner Avenue. (A close look at the full page of the 1900 census reveals the clear entry of the street name.)

Since I'm not familiar with Chicago geography, I went next to Google Maps to see where that address falls in its current surroundings. As you'll see in this map inset, 92nd Street curves around to eventually become Turner Avenue, and the Webbs' address is close to the corner of 93rd Street. 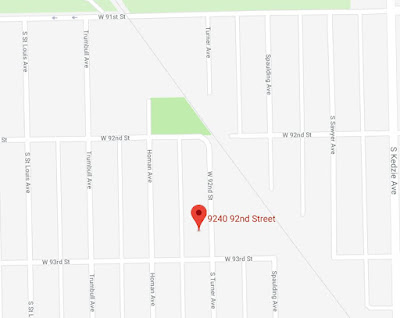 The 1900 census, as well as the 1910 record, show that Rachel lived with her husband, Francis, and their daughter Clara. The 1900 census revealed that Rachel was born in November of 1836, somewhere in the nearby state of Indiana. Her husband was only months older than his wife, declaring his birth in Ohio to have occurred in January of 1836. The couple had been married for forty five years, and of their five children, all five were still reported as living.

Along with Francis and Rachel, the Webbs' forty three year old daughter Clara was living at that address. Of the three, only Francis had been employed—as a carpenter, but working for only four months out of the past year. Neither Rachel nor their adult daughter listed any occupation. Considering the time period and the age of Clara's parents, that was not unusual.

With this small confirmation that the Rachel Webb in the photograph—living at 93rd and Turner—was the same as Rachel, wife of Francis Webb in the 1900 census, we now have a toe-hold from which to spring into other documentation to learn more about Rachel's life and family.
© Copyright 2011 – 2022 by Jacqi Stevens at 2:50:00 AM
Email ThisBlogThis!Share to TwitterShare to FacebookShare to Pinterest
Labels: Chicago, Family Photos, Webb