When Family History Surrounds Us


After a delightful time visiting Chicago family—and squeezing in a trip to family stomping grounds in Fort Wayne for the FGS conference—it is finally time to take our leave and head home. It's the travel effort that almost makes me think twice about these family safaris, for the unpredictable is sure to pop up. But here we go.

It wasn't lost upon me just how sensitized we become to tokens of our family's history when we begin to delve deeply into the details. The streets of Fort Wayne seemed to call to us that these were the very places where John Kelly Stevens' footsteps fell as he walked his beat for the Fort Wayne police force, one hundred years ago.

It was worth it to take the time to detour to places where tokens of that history might be obtained for future inquisitive family members. While I was hot on the trail of the people I needed to meet—and learn from—at the FGS conference, my husband was on the phone, looking for any way to obtain relics of his great grandfather's tenure in the city we were visiting. 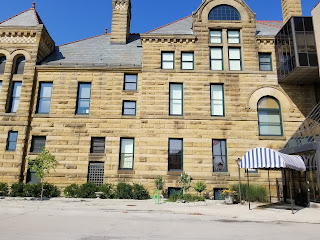 Where John Kelly Stevens and his coworkers reported for duty every morning. 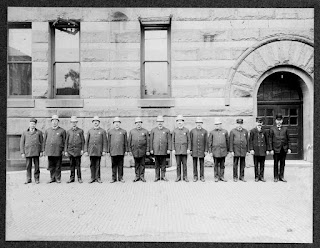 The building as it stands today, home of the Allen County-Fort Wayne History Center and museum, including a display of the county jail in the basement. It just looks like a magnificent old building today. Who would have known the stories it held, a century ago, if we hadn't looked to find the details in old photographs and newspaper reports?

It's the same for the other cities I've visited, especially when I'm looking for old photographs to rescue. There are signs of our history all around us—we just need to know how to connect with those old insignia on buildings, the old faces in photographs, the old streets and the people they were named for. A walk down the streets of any city of any tenure by default contain the relics of the history of the families who built the place they called home. 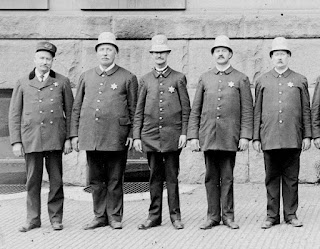 Above: Closeup of the insert above of the Fort Wayne Police Department, circa 1921, standing in front of what is now the Fort Wayne History Center. John Kelly Stevens is in the middle of the five men, and third from the left in the full picture above. Photo of the old city hall building as it stands now, courtesy of Chris Stevens.
© Copyright 2011 – 2021 by Jacqi Stevens at 2:54:00 AM