It may have been sheer curiosity which coerced me into reading every single one of the hundred-plus pages of George Edmund McClellan's probate records, but it was curiosity driven by a reason: George was my third great grandfather. That, granted, should have been a relationship so removed that I'd expect to know nothing of the man. On the contrary, what happened after his passing in 1866 is still remarked upon by McClellan relatives in Florida to this day. I owed it to myself to uncover the reasons for such family resentment.

Of course, I'm a long way from piecing together the complete story of how George's second wife and executrix, Celestia Relief Holman McClellan Grant, wrapped up her business in settling the McClellan estate. But I'm beginning to get an idea of what happened.

If nothing else, I have—through the pages and pages of records, receipts and miscellaneous scraps of paper—gotten the picture that not only did Celestia make property decisions which rankled George's orphaned children, but she evidently wore out the officials in the Suwannee County courts, as well.

Since the case had dragged on for so long, I thumbed through the folder to see the most recent date I could find on any of the records. George had died on October 19, 1866, which precipitated the probate process. The most recent dates I could locate were in the early 1870s. One would presume Celestia had wrapped up her business as executrix by that point and moved on—likely to Indiana, as she had stated, although given her proclivities, one could never be too sure.

Tucked among those receipts in the McClellan file was an odd note, dated September 29, 1873. On one side, it read, reasonably enough,


The case had gone on and on so long that it overran the judge's own term of office. While I'm sure a collective sigh of relief was heaved when the final fees were paid and Mrs. Grant had swept out of town—in haste, no doubt—I find the note scrawled on the reverse of this receipt to be an amusing footnote to the episode. 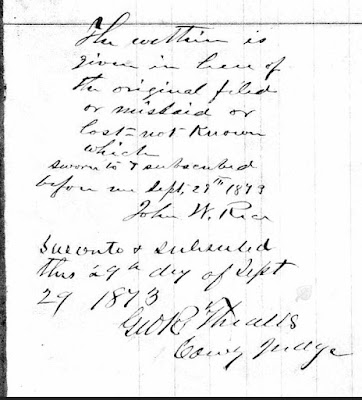 The within is given in lieu of the original filed or mislaid or lost = not known which.
Sworn to + subscribed before me Sept. 29 1873


The note was countersigned by the then-current county judge, John W. Rice's successor, George R. Thralls, who seemed quite willing to play this small part in enabling the last bit to be swept into place—in whatever way possible—following the whirlwind of the personal drama that was Celestia.

Of course, I can't be satisfied with leaving the story sit pat in Florida. If Celestia was headed for Indiana, I'd have to follow her there, as well. After all, she did have three children by my third great grandfather—two of whom were still living at the time of her Florida exodus. I need to follow the trail, not only to see what became of Celestia Relief Holman and "her children"—as George had put it in his will—but to see if I can discover anything more about the woman. After all, I have no idea where she came from before her 1861 marriage to George McClellan in Florida. She wasn't a Florida native. What brought her to town?


Images above from Suwannee County, Florida, Probate records, courtesy Ancestry.com.
© Copyright 2011 – 2022 by Jacqi Stevens at 2:46:00 AM
Email ThisBlogThis!Share to TwitterShare to FacebookShare to Pinterest
Labels: Florida, McClellan, Wills and Probate