Those Gems We've Tucked Away


It was while on a mission to find something else that my husband uncovered a photo he had long been missing. He remembered it clearly enough, but the part that wasn't so clear was its exact location. Thankfully, not only was the item found, but now scanned, labeled, stored and shared. Since it's a weekend—and my time, traditionally, to wander from my weekday topics—I thought I'd share this unusual piece of family history with you.

Those who have been following A Family Tapestry for a few years may remember the story I told of my father-in-law, Frank Stevens. From the point at which the Pearl Harbor bombing galvanized so many young men and women to action and service in our country's military, I took Frank's story from his early years in Chicago when, at age seventeen, he enlisted in the Navy, all the way through his military career to the point at which, by then retired from the Air Force in the mid-1960s, he tragically lost his life in a vehicle collision.

During part of his years of service—by this time, in the Air Force—he and his family lived on Holloman Air Force Base in New Mexico. The family estimates the time of the photo (below) was some time between 1957 and 1963. It's a photo of Frank preparing to ride what the family called "the G sled"—a device utilized at the Holloman High Speed Test Track.

The only trouble with that estimate—well, if you can trust the Wikipedia write-up on the topic—is that the last of the volunteer human test subjects to ride the sled was in December, 1954. That, likely, was on December 10, when the director, Col. John P. Stapp, achieved 632 miles per hour, the highest known acceleration voluntarily encountered by a human test subject.

No matter when, exactly, Frank Stevens rode the G sled at Holloman AFB, we certainly have a photo commemorating the event—our family's small part to help develop the U. S. space program. 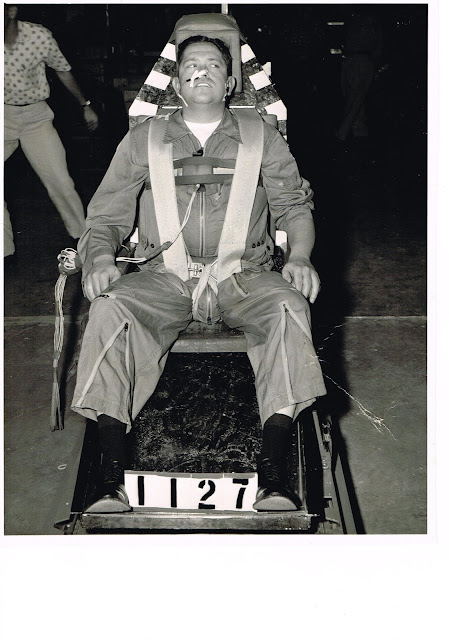 Above: Frank Stevens at Holloman Air Force Base's High Speed Test Track, in harness with monitors attached, about to ride the G sled. Photograph in possession of author.