Clues That Add Up


When I am on one of my photo rescuing missions, I don't pick just any abandoned pictures for a project. A photo suitable for rescuing needs to contain enough clues to lead me to a conclusion—and to find a candidate not only descended from the photo's subject, but one who is willing to receive the item.

Not that I insist solely on rescuing cabinet cards containing both first and last names. I've managed to return an entire photo album to a family living over six thousand miles away from the antique shop where I first found the collection—and all I had to start with were three first names: Iris, Ruby, and Penrose. (Admittedly, Penrose was an exceptionally strong clue, despite lacking a last name. Perhaps the name of the kennel of their blue-ribbon winning West Highland White Terrier might have tipped the hat in my favor.)

The most successful candidates for a return trip home, one hundred years after the fact, seem to be ones with at least one fact about their name, coupled with another detail about the person. That second detail, for instance, could be a location, like that of the studio taking the picture. In a way, I am "triangulating" (if you can call it that) the details on the photo to help me zero in on the correct individual.

In the case of Rachel Webb, the woman with the intense gaze whom we met yesterday, I was fortunate in that not only did I have the woman's full name—well, at least her married name—but I had two other details to combine with that record. For one thing, the imprint of the studio let me know not only the business name, but the street address and the city of its proprietor. Besides that, on the reverse of the photograph, someone had penciled in the customer's address, and yet another someone with a different handwriting had inserted what I presume was meant to be the woman's maiden name.

Thanks to the photographer's shortcut to linking products with customers, we now know that Rachel Webb—whoever she was—happened to live at 93rd and Turner. Since the photograph was taken in Chicago, I went online to see if I could find anyone by that name in any records that could reveal her address.

Fortunately for us, there was indeed a woman by that name, living near that location, which allows us to move quickly to our next step. We'll begin, tomorrow, looking through street maps and census records to see what we can learn about Mrs. Rachel Webb of the neighborhood by 93rd and Turner in Chicago. 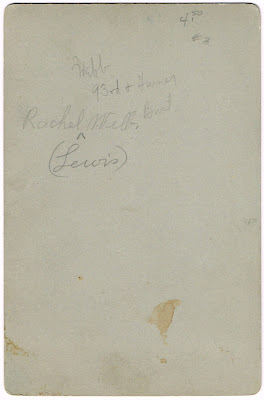 Above: Reverse of the hundred-year-old photograph of Mrs. Rachel Webb of Chicago; photograph currently in possession of author until returned to a direct descendant family member.
© Copyright 2011 – 2022 by Jacqi Stevens at 2:51:00 AM
Email ThisBlogThis!Share to TwitterShare to FacebookShare to Pinterest
Labels: Chicago, Family Photos, Webb