In Pursuit of the Matriline


A person like me could get ecstatic over receiving news that I had an exact match on my mitochondrial DNA test. After all, the one big roadblock to my past, at least on my matriline, is that my second great grandmother was an orphan. For those of her descendants who might have known her, the woman's memory was a dim recollection. After all, she died when her surviving children were aged five and three.

Nevertheless, based on conjecture which I believe I have a thorough argument to support, I have constructed a hypothetical matrilineal ascent. Any daughter of a daughter of a daughter (well, you get the idea) of any woman on that line—at least, if my hypothesis was correct—could very well show up as an exact match to my mtDNA results. If, of course, that woman chose to undergo her own full sequence mtDNA test.

However, the one single match that I've received from someone who wasn't an adoptee himself came from a woman whose tree, while containing surnames I could claim for my own pedigree, didn't have much more than that in agreement with mine.

Before I can state my case on my orphaned second great grandmother using my mtDNA results, it would help to lay out the details. So, starting with the Charles Taliaferro household I mentioned yesterday in which we found my second great grandmother—listed as Mary "Reiney"—in the 1870 census, let's see what else can be found for her.

Because she was listed as only nineteen years of age in that census, our only other possibility for finding her in census records was in the 1860 census; the 1850 census would predate her. And though I knew her married name, by the time of the 1880 census, she was no longer alive.

Fortunately, though her maiden name had been presented in so many phonetic permutations in various documents, I did locate a possible candidate for the correct enumeration entry. This one was for a Mary "Raney," aged nine, living in the household of a woman whose name was also Mary Raney in the now-non-existent Campbell County, Georgia. She was apparently a widow. Along with the youngest child, who was presumably our Mary, there was the reassuring presence of someone named Thomas, who was almost exactly ten years younger than the Thomas who had also been listed alongside our Mary in the Taliaferro household in the 1870 census. 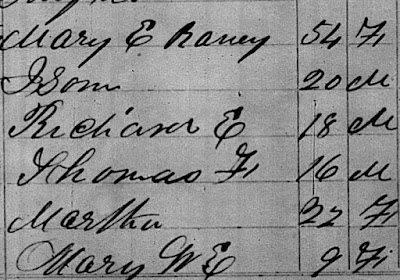 If I was going to trace my matriline, though, it would help to know the name of this elder Mary's husband. Checking the 1850 census yielded a possible candidate: Thomas F. Rainey. With this, I found marriage information dated June 9, 1818, in Oglethorpe County, Georgia, showing a Thomas F. Rainey whose bride was Mary E. "Talafero."

Recalling the original household in which I first found my second great grandmother, Mary Rainey—headed by a man named Charles Taliaferro—this "Talafero" caught my eye. Being a surname which is not at all pronounced like it reads, it is understandably misspelled.

The next question, of course, becomes: did the household in which the younger Mary and her (presumed) brother Thomas live in 1870 belong to a relative of their now-deceased mother? Whether or not that was so, for the pursuit of my matriline, I still needed to trace this next generation to see who the mother was of this older Mary Rainey.


Insert above from the 1860 U.S. Census for Campbell County in the state of Georgia courtesy FamilySearch.org.

© Copyright 2011 – 2022 by Jacqi Stevens at 2:54:00 AM
Email ThisBlogThis!Share to TwitterShare to FacebookShare to Pinterest
Labels: DNA Testing, Georgia, Rainey, Taliaferro