Years back, someone came to the realization that, when it comes to examining generations, we can't just look at the dichotomy of young versus old. There is a third element to consider in this meshing of the generations.

That concept—articulated aptly as the "Sandwich Generation"—evolved at the nexus of the "Greatest Generation" and the generation following in their shadow. There was, it seemed, no challenge seen as insurmountable by this leading giant of a generational cohort. Their winning, take-charge ways left those behind them still waiting in the wings for their own turn.

That wait, it turned out, took a longer time than expected. By the time the "Greatest Generation" was ready to turn over the reins, that subsequent generation realized they already had someone nipping at their heels: a younger, hungrier, less patient generation.

Meanwhile, that middle generation was faced with other challenges. On the cusp of launching their own children out into the wilds of the college or career world, they were being overtaken with the responsibility of caring for their aging parents—all while tap dancing for the work place at which they had, for far too long, hoped to gain that coveted promotion to a level of more responsibility.

That's a scenario many have found themselves re-enacting in their own life stories. And just as journalist Tom Brokaw had dubbed those noble can-do overcomers "The Greatest Generation," that middle generation also got its own—albeit slightly more ignoble—label as the "Sandwich Generation."

There is one arena where that scenario has not played itself out quite so obviously. Actually, it is one domain where we could exploit the strengths of that middle segment. But much like actress Clara Peller in her famous line for the Wendy's commercials of the 1980s, when we look for that middle generation in this case, we may be tempted to shout out, "Where's the beef?"

That domain is the one I alluded to yesterday, when discussing the area of local genealogical societies. While the core constituencies of local societies, in general, are aging off the playing field—though tenaciously continuing to serve their organizations in whatever way they still can—our one thought, as organizations, seems to be to encourage "the young" to join us.

We turn out creating long term growth plans looking vaguely reminiscent of the "Big Bun" hamburgers of the fictitious rivals in the Wendy's ad: one bun to represent the age-old members, one to represent the hoped-for hordes of young people. But there's no meat there in the middle to represent that sandwich generation.

"The Young," as my own daughter likes to put it, may be fleeing encounters with genealogical societies in the fear that, once stepping inside the meeting hall lobby, they would otherwise be accosted by a gray-haired mob scene shouting, "Fresh meat!"

That middle generation, on the other hand, represents the most likely candidates to take up the charge of local genealogical societies. Soon planning to retire from their full-time jobs, they are actively exploring ideas for what to do next with their lives. While they want to have a fun retirement, they also hope for meaningful engagements and the chance to pursue stuff they've always wanted to do—like exploring their roots.

While the soon-to-be-retired are crafting their exit plans from work, this is our golden opportunity to help them build bridges to realize those retirement hopes. These are the membership candidates who will approach society membership with the new vigor most organizations appreciate. They also are the people who can bring updated work know-how to the table, integrating such commonplace work tools as technological advances to our sometimes computer-phobic milieus.

While it is vital to also court the younger generations and welcome them into the society's fold, I see that as more of a long-term planning strategy. We need to remember that that is not the only field for finding potential new members. There are many soon-to-be-retired career people out there—those "Sandwich Generation" survivors currently crafting their "launch" trajectory—who would not only be receptive to the idea of joining our ranks, but have the ability to make that dream a reality in a matter of only a few years or less. 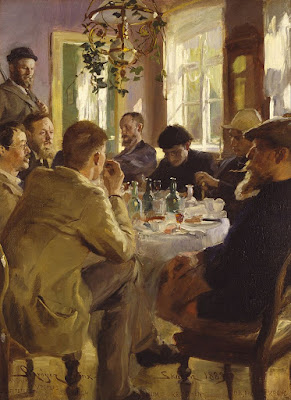 Above: "At Lunch," 1883 oil on canvas by Norwegian-born Danish painter, Peder Severin Krøyer; courtesy Wikipedia; in the public domain.