July: the month so long it never seems to end becomes the vanishing month that flew by in a blink.

I had fully intended to share a story today, which someone had passed along to me—until I realized another two weeks had passed and it is time to check those research progress numbers once again. Let's take a pause in the photo album narrative to attend to duties before resuming with the promised story tomorrow. I've simply got to stay on track.

When there are many irons in the fire, things seem to catch up with me that way. And the research numbers seem to bear that out. Seemed like there was always something to do, but it apparently wasn't steady progress on my databases. You'll see what I mean.

In the last two weeks—and especially following the last time period, when I seemed to be zooming ahead with research progress—I didn't add too many names to our family trees. But I didn't do too badly, either.

For my mother's tree, the count was 10,970 in total, increased by 151 in the past two weeks. Add to that my mother-in-law's tree, where adding an additional 222 brought the total to 12,369 names. Not quite as much as in the previous two reports, but still a decent amount of progress. Unfortunately, on my father's and my father-in-law's trees, I've regressed to my former lack of effort. No progress in either of those two pedigrees.

I guess the Father's Day sales are finally beginning to show in our counts for DNA matches. That is good news for me, chomping at the bit for a solid connection with cousins I never knew I had. There were 54 additional matches for me at Family Tree DNA, bringing my total to 2,261, and 32 more for my husband, yielding a total of 1,474 matches for him. While I don't count anything but autosomal tests at Family Tree DNA, I did manage to confirm an mtDNA match this past week, as you've likely observed through last week's posts.

Results at the other testing companies weren't as robust. Of course, the number I track at AncestryDNA only shows cousins up to the level of fourth cousin, so naturally that total will be more modest than Family Tree DNA's, where they include cousins from sixth to "distant" in their count. Knowing that makes it more reasonable to see that I have only 670 (an increase of 16 in the past two weeks) and my husband has 319 (up 15) at AncestryDNA. And being ever the contrarian, 23andMe actually gives us a decrease in our total number of matches over the last two week period. I now have 1,179 (down 15) and my husband has 1,234 (down 10).

It's interesting to observe the variance between my results and my husband's. I have far more matches than he does at Family Tree DNA and AncestryDNA, and yet for 23andMe, his count is higher than mine. I've always presumed I had the higher count at the other two DNA testing companies because I have several colonial roots, but I'm not at all sure to what I'd ascribe the reverse trend at 23andMe.

With each of the testing services amassing ever larger databases with the passing of time, I keep hoping for some surprise breakthroughs—like discovering some answers for my father's paternal brick wall, or more clues to the rest of my father-in-law's Irish heritage. Perhaps these will come with time. In the meantime, the lesson most aptly illustrated by this process is the value of working, bit by bit, steadily over time. Eventually, these little bits do add up to something we can feel good about calling "progress." 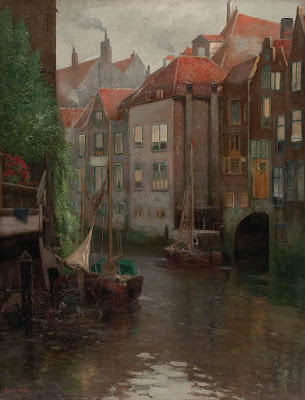 Above: "Boats in a Canal," undated oil on canvas by Austrian landscape artist Adolf Kaufmann (1848 - 1916); courtesy Wikipedia; in the public domain.
© Copyright 2011 – 2022 by Jacqi Stevens at 2:45:00 AM
Email ThisBlogThis!Share to TwitterShare to FacebookShare to Pinterest
Labels: DNA Testing