In trying to find the parents of a woman born at the turn of that other century—yes, we're going back nearly to the year 1800—there are no handy birth certificates to consult. Thankfully, for those with enough property to make the difference, there are wills.

In the trek backwards through the generations from my orphaned second great grandmother, Mary Rainey Broyles, we've learned that she was named after her own mother, Mary, wife of Thomas Firth Rainey. Fortunately, a marriage certificate for Thomas and the elder Mary showed that woman's maiden name to be Taliaferro.

Researching this particular Mary Taliaferro Rainey brings us back to the early 1800s in both Georgia and South Carolina, where sometime before her 1818 marriage to Thomas Rainey, she found herself an orphan—if, that is, I have the correct information for her. Thanks to a number of genealogies and other records published a hundred years ago, her parentage has been provided where source documents are otherwise lacking. The claim is that Mary's father was Warren Taliaferro and her mother was Mary Meriwether Gilmer. Yes, another Mary in the matriline.

In Warren Taliaferro's will, drawn up in October, 1815, at his residence in the Pendleton District of South Carolina, he named two of his sons—Charles and Zachariah—and two daughters. Fortunately, with the statement, "my daughters Mary Elizabeth Taliaferro and Lucy Gilmore Taliaferro," our Mary—the one who eventually married Thomas Rainey in 1818—was one of the children named.

Of course, nothing is ever easy. Though I was, thanks to this document, armed with the names of Mary's two brothers and one other sister, that did not match the record filed with the court in Oglethorpe County, Georgia, in 1818. That document named brother-in-law Peachy R. Gilmer as guardian of the by-then deceased Warren Taliaferro's minor children. And yes, you guessed it: Mary Taliaferro was not among the ones named.

Thankfully, though, the dates tell the story: the guardianship papers were filed in Oglethorpe County on September 24, 1818. Checking that marriage document filed in the same county in Georgia for Mary, it was dated June 9 of that same year, providing the reason for Mary's exclusion from the guardianship papers—and for a marriage taking place in Georgia for the daughter of a South Carolina resident.

Adding yet another presumption to this recounting of the generations, we now have Mary Taliaferro Rainey's parents listed as Warren Taliaferro and Mary Meriwether Gilmer. This, incidentally, provides an explanation for the relationship to the man at whose home my second great grandmother and her brother found themselves staying by the time of the 1870 census, for if her mother was daughter of Warren Taliaferro, that meant the Charles Taliaferro at whose home she was staying was her maternal uncle.

Since the purpose of this pursuit is to follow the matriline from my orphaned second great grandmother backwards in time, our next goal is to push back one more generation on Mary's mother's side. Thankfully, the Gilmer line has been well documented in a number of published genealogies (not that that doesn't preclude the necessity of proving the line for myself). Tomorrow, we'll explore the parentage of Mary Meriwether Gilmer, wife of Warren Taliaferro and maternal grandmother of my orphaned second great grandmother. 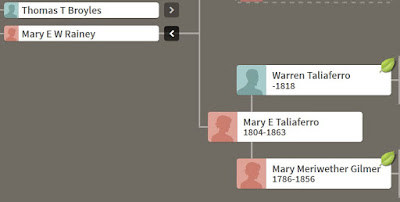 Above: Too many Marys make the narrative confusing. Here is a snippet from the pedigree chart, showing my orphaned second great grandmother, Mary E. W. Rainey Broyles, linked to her presumed mother, Mary E. Taliaferro Rainey, and then to her parents, Warren Taliaferro and Mary Meriwether Gilmer. Graphic layout of the data courtesy of Ancestry.com.
© Copyright 2011 – 2021 by Jacqi Stevens at 2:53:00 AM