Off the Shelf:
Man's Search for Meaning


It was not hard at all to decide which of our literally hundreds of books to pull down from the shelf for this month's read. The result came about from a convergence of timely thoughts and experiences, and made it so I couldn't just not read it.

Actually, the book didn't originally come from my bookshelves. It came—as I realized when I opened the cover and a bookmark from November 16, 2006, fell into my lap—from my mother's bookshelves; I had grabbed it then as I ran out her door. The reason for the precise date was that it was stamped on the paper, which in reality was a stand-by boarding pass for my family's return home after attending to my comatose mom in the hospital subsequent to the car wreck that broke her neck.

Such are the types of incidents which prompt people to search for meaning in life.

Apparently, the drive to find meaning in all that upheaval was not as powerful as I had hoped, for once on the plane bound for home, I read only a few pages, then realized my mind was racing far too much to absorb what someone else was saying to me.

Fast forward to this spring. A local Italian heritage association had asked me to come speak to their members about starting a family history project. Their director explained: the group had just conducted a survey, seeking to discover what was uppermost in their members' minds for the upcoming year's program content. Highest on the list were two responses. One—of course! These are Italian-Americans we're talking about—was to revive the skills necessary for re-creating those delicious traditional Italian recipes. The other? Learning how to research members' own family history. And not just the names and dates; they wanted to preserve the stories.

Tasked with telling this group everything they need to know about genealogical research in one hour, I began thinking a lot about this notion of preserving our heritage. It's fairly obvious that there is a surging interest in exploring one's roots lately. Not only have online sites like Ancestry.com or FamilySearch.org seen demand for their services, but programming about genealogy seems to be everywhere, from television series to YouTube channels to podcasts to blogs.

Of course, that prompted a question in my mind: why? Why this increased interest in genealogy? Is it simply because these organizations have concocted the magic sauce for irresistibleness? I doubt it. Nor do I think it is all on account of people "always wanting to" research their family tree, just because they watched Roots back in the 1970s.

When I talk to people who want to learn how to start their own research, they usually have one of two reasons to embark on their project. One is inspired by the soon arrival of a grandchild, or other such motivation to pass along to descendants information about their extended family. The other reason—the flip side of this same coin—generally focuses on discovering our "roots."

In thinking about these two typical responses to the question of why people embark on genealogical projects, I realized something. Each of these—and they are really two different ways of looking at the same motivation—can be reduced down to one essence. The pursuit of our family's stories, the quest for our roots, are really a way for us to find meaning in life—in both our ancestors' lives and our own.

Of course, letting those thoughts inspire me to grab a book like Viktor Frankl's Man's Search for Meaning turned out to be roughly akin to choosing a conference breakout session based on only the title, not the course description. The book, originally published in 1959 by this Viennese psychotherapist, was birthed through the indescribably painful experience he endured as a prisoner at a Nazi concentration camp. It is a short but heavy read. Yet priceless, as a book to be experienced.

Continued existence—no matter how destitute, according to Frankl and supported by his wartime experience—can only be sustained by meaning.


Life ultimately means taking the responsibility to find the right answer to its problems and to fulfill the tasks which it constantly sets for each individual.


It was the eloquence of Frankl's brief narrative that demonstrated his point. Most of the hundred pages which comprise the first part of the book involves a recounting of the author's wartime experience. While no explanation can lead us to grasp the day in, day out agony of life in those concentration camps, Frankl was able to provide illustrations of how his realizations helped him cope with the last vestige of freedom still available to him: the ability to choose his response to the injustices he faced daily.

Those were the examples which supported Frankl's development of the "third Viennese school of psychoanalysis" which he called logotherapy. A discussion of the therapy's tenets is briefly provided in the second part of the book.

Since my original educational background is in rehab therapy, I found it informative to review the concepts, juxtaposed with the author's recounting of his dreadful personal experience, although I imagine the general reader might not share my interest there. Still, reading the first part of the book makes me realize how empty and insipid our concerns of modern-day life have turned, now that we are so far removed from the deprivation and desperation of those war-torn years. The profound insights yielded by the author's intense suffering demonstrate his contention that even the worst negative aspects of life can produce meaning, if that is what a person must endure.

Of course, while our ancestors' stories may have demonstrated survival in the face of such dire straits, it certainly doesn't infer that we must suffer for our "art" of genealogy. And yet, I believe it is that same drive—a quest to bestow meaning upon our life experiences—that motivates people to embark on the exploration of their family history today. Researching our own history gives us a way to connect with our past in the stories of the adversities our ancestors overcame, and provides a promise of a future as we bring those stories forward to pass them along to our children and grandchildren. 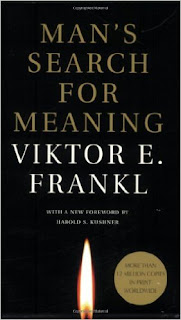 Email ThisBlogThis!Share to TwitterShare to FacebookShare to Pinterest
Labels: Books, The Therapy of Memories, Wars