The Strange Ways of Cousin Bait


"Cousin bait" can work in mysterious ways. We post blogs and chat on online genealogical forums and fling our family surnames far and wide on social media...and receive nary a query about our ancestors. Just when we give up and decide to hunker down in our genea-caves to do some solitary research, out of the blue comes a little nibble of interest.

I got my latest contact via the messaging system at Ancestry.com. Someone had found my maternal family tree through a search for a specific couple in the Meriwether line. Because I've been doing everything possible to help connect distant relatives—not to mention, potential DNA matches—with the right portion of my extended tree, it includes doing what so many now call "reverse genealogy," seeking descendants of specific ancestor lines.

Needless to say, since my Meriwether ancestors go so far back in time—remember, this is the speculative connection I discussed during the past two weeks—that means a lot of lines of descendants have been added to my tree over the last several months. Enough, that is, to help locate the fourth cousin connections which seem to populate my match list at Family Tree DNA.

So when I got a note via the Ancestry messaging system, inquiring about one Esmonde Meriwether, born 1894 in Montgomery, Alabama, it was referencing someone who was the husband of my second cousin, thrice removed.

Not anyone I knew personally, you see.

The situation was this: the woman writing me explained, first of all, that she was not, herself, related to the Meriwether line. However, she was hoping I could help her connect to family who was more closely related to Esmonde and his wife Cornelia Meriwether (yes, a Meriwether married a Meriwether).

As it so often happens, this woman—Pat, an active genealogical researcher for over a decade—thankfully had a son who knew his mother's passion for family history. This son happened to be well known in his city for his home repair skills. A house in his own neighborhood had recently been sold and was in need of some rehab work. The new owner called this man in for assistance.

When Pat's son arrived at the property, he found it empty except for one small detail: a box of old photographs. The new homeowner told him he could have them, if he wanted.

Fortunately, Pat's son remembered his mother's penchant for genealogical research and gave her a call. He suggested she "might find someone that would be interested."

Interested? Of course! You know we all would be. After sending a surname-free photo album back to Ireland, this should be easy. Right?

The only identifying marks on the photos were the names of the Meriwether couple, thankfully named in one of the photos. I offered to share the photos here on A Family Tapestry, and my correspondent was certainly willing to let me do so—except that something happened before we could get to that point.

She started doing her own research.

Of course, Pat's next thought was to see if either this woman or her daughter, though selling the house, still remained in the same city. It was a long shot to attempt that connection, because Esmonde and Cornelia's daughter would now be well into her nineties.

Pat's message to me continued,


I'm going to try and locate them. If I fail then I will scan the pictures and send them to you. I'll let you know how it all turns out.


True to her word, a little over two weeks later, I heard back from Pat. She wanted to provide an update. She did, indeed, find the daughter of Esmonde and Cornelia Meriwether. As Pat put it, that daughter is now "ninety five years young."

Pat's enthusiasm is infectious, as she reflects on her meeting and what she was able to return to family:


I met with her this morning and was able to give her the box of old pictures. She was delighted and very grateful. These were pictures of her husband, her brother..., herself as a young woman and a beautiful picture of her mother. There were also pictures of her daughter and her grandchildren. So glad I made the effort; her joy was worth it. I love happy endings.


When Connie, the blogger behind Forgotten Old Photos first gave me the nudge to start looking for "orphan photos" and figuring out how to return them to family, I discovered this same joy. While the result may be a small victory, it is a happy ending. Now that I've had that experience, I'm eager to encourage others to go out and do the same.

With this unexpected contact, thanks to the cousin bait inherent in genealogy blogging, I got to witness first hand another researcher's chance to experience that same altruistic joy over having put those research skills to good use. It's a different kind of genealogical kindness—perhaps even somewhat random. But just as rewarding to know that the skills we possess can be a blessing to others. 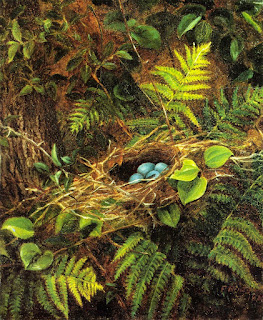 Above: "Still Life with Robin's Nest," 1863 oil on canvas by American artist Fidelia Bridges; courtesy Wikipedia; in the public domain.