Who do you talk to about the stuff you love, when you want to avoid that MEGO expression? You know, that "My Eyes Glaze Over" look you get when you recite your latest genealogical conquest. Where do you go to find people who can get as enthused as you about the stuff that matters?

Yesterday, I mentioned the discussion about "collaborative circles" I found in a book I've been reading lately—Jeff Goins' newest release, Real Artists Don't Starve. There's a reason that concept resonates with me. It has partly to do with my own heritage, of course, but also is firmly rooted in my childhood memories, as well.

When I was a kid, my father—a musician who, by then, had retired from the stage lights of the big band era in New York City—had his own home-based business providing music lessons. He had a studio, of course, separate and apart from our home, but even if he taught those music lessons away from our house, each of us kids knew we couldn't touch the home phone until we were old enough to answer it professionally, including the phrase, "and may I take your name and number?"

It was a natural progression, from that childhood milieu, to slide into my own home-based business endeavors, post college and alongside day jobs through the years. That kind of lifestyle certainly has its ups and downs. What helped the most, during those shaky starts, was to get together with other people in the same stage of effort. Thankfully, in our city, there was a program geared to young women starting businesses, sponsored by our small business development agency, where we could gather, once a month, to talk about the challenges we were facing.

There was something encouraging about those brief morning gatherings. Even though each of us was launching a different type of business—some were crafters, some were writers, some were launching service-based businesses—it seemed that the concepts discussed spawned ideas in each other's minds, no matter what the type of business concern we had. I almost always left the meeting feeling energized with the new possibilities birthed from other members' comments.

Those thoughts were echoed in the discussion we had a few weeks back, when I posted about concerns over the possible demise of blogging as a medium for connecting with like-minded genealogical researchers. Perhaps in an ironic way, bringing up that topic here triggered its own set of comments—a lively discussion—demonstrating that we are still all out there, still reading, still musing over the ideas that enliven us.

We are still there, still connect-able. While something may have changed in the readouts that count our presence—perhaps we have gone "invisible," undetectable—we still have much to say.

But perhaps the arena in which we are talking has changed. If it is no longer in the blogging sphere, where has it gone? Where do you go to connect with others about genealogy? Has your family actually suddenly fallen in love with your passion? Have you found a new crowd? Or do you just not talk about it anymore? 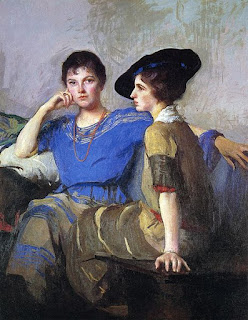 Above: "Two Sisters," 1921 oil on canvas by American Impressionist artist, Edmund Tarbell; courtesy Wikipedia; in the public domain.
© Copyright 2011 – 2022 by Jacqi Stevens at 2:56:00 AM
Email ThisBlogThis!Share to TwitterShare to FacebookShare to Pinterest
Labels: Reflections on Community