While Ireland Was Sleeping


Communicating with another side of the world—something which might have taken months, back in some of the eras in which we've been pursuing our families' histories—is now simply a matter of a tag team approach. While Ireland is sleeping, I dispatch an email or post a comment on social media, call it a night, and while I'm sleeping, Ireland wakes up and sees my message.

Add that to the many benefits of attempting genealogical research in the digital age. It is certainly accelerating my quest to locate a living descendant of the couple whose Christmas 1936 photo album ended up five thousand miles from their home by 2015, the year I found it in an antique shop in a neighboring town in northern California.

After that rapid volley between members of the Cork Genealogical Society on their closed Facebook page in response to my Saint Patrick's Day query, one of the participants suggested that I take a look for a particular name on Facebook. I did. Of course, there were five or six options from which to select my candidate for contact. One never knows whether the first choice will turn out to be the right choice, but the only way to proceed with this quest is to take the step and make at least one choice.

This option, of course, would greatly speed up the possibility of a response. I went ahead, selected one of the names on the Facebook list, put in a friend request and added a private message. Just as I had started Saint Patrick's Day—with a post to the Facebook group at midnight at the start of the holiday—I ended it with a tentative message direct to the person I hoped would be the right one.

And wished for a graceful reception to my brazen intrusion on someone's privacy.

Just as our family was finally collapsing into bed that night—after frantically packing for a cross-continental flight in the morning—my husband heard a little "ding" come from my phone. I was already oblivious to the noise, so he simply mentioned it the next morning, figuring it was just a text about our trip the next day.

The next morning, after running to get to the airport on time, we finally settled in at the gate. While awaiting boarding, I remembered his comment and decided to check my texts before powering down my phone.

I was surprised to see I hadn't received any.

Instead, there was a notification that I had received a note via Facebook Messenger.

There, in the midst of the rush and noise of a busy airport, it seemed like being suddenly transported to a different world. I wanted to jump and shout, but remembered to keep my composure in such a public setting. This was, after all, an airport. No sense in causing undue alarm. Besides, this was a good jump and shout episode.

While Ireland was sleeping, I had sent the twenty-first century's equivalent of a message in a bottle. By the time I retired for the night—and while Ireland was just starting to awaken—someone five thousand miles from me was sending a message back.

It was a good message. She's the right choice. After eighty years, the album Harry and Alice Hawkes Reid sent as a Christmas greeting will soon be going home. 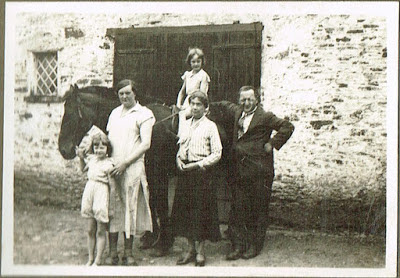