Roots in a Revolution


When most Americans think of the Revolutionary War, they think of the date 1776. Thus, when a soldier designated by the Daughters of the American Revolution as a "patriot" died in service to his country in 1774, it seems somewhat contradictory.

Actually, that year of 1776 marked the date of the document we call the Declaration of Independence. The period of political turmoil in those particular British colonies in North America spanned the years 1765 through 1783. The outbreak of the war has been pegged to an event in the Massachusetts colony in 1775.

Thus, when Captain John Frogg, recently married and father of a young child, died as part of the Battle of Point Pleasant in 1774, he became—at least in the minds of some—an American Patriot. Though Point Pleasant is still commemorated locally as the first battle of the American Revolutionary War, historians generally consider it part of preceding action which they refer to as Lord Dunmore's War—a complex strategy played out in the British governor of Virginia's hope to divert Virginia colonists' attention away from the crisis unfolding then among colonists in Boston and toward the opportunities possible with western expansion.

The governor's strategy failed, both in battle with the Native confederacy they faced at Point Pleasant and in diverting the Virginia colonists' attention away from the brewing revolutionary forces against the Crown up north, causing controversy among historians in the next two centuries. In the process, though, his plan precipitated a battle which, on the side of the militia, cost the lives of seventy five men, including Captain John Frogg.

The young captain—not quite thirty years of age when he lost his life—had married Agnes Lewis, daughter of my sixth great grandparents Thomas and Jane Strother Lewis, in 1770. The young daughter of John and Agnes—they named her Elizabeth Strother Frogg—probably was too young to even remember her father after his death in 1774, being barely three years of age when he died.

It wasn't long before the widowed mother of Elizabeth Strother Frogg remarried—another military man—and Elizabeth was raised by her step-father, Colonel John Stuart. Eventually, Elizabeth herself married a military man—Major Isaac Estill of Monroe County (then in Virginia)—when she was not quite eighteen. With that 1788 event, the family history of this particular branch of the Strother-Lewis descendants began four generations which traced the Estill surname—still far before that senator's surname I wondered about, yet full of stories of their own family history. 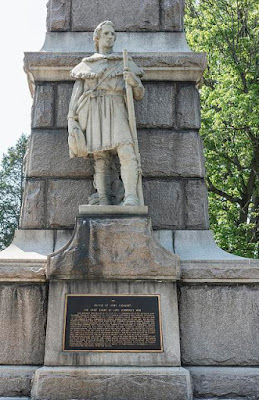 Above: Photograph of a Virginia frontiersman on the Point Pleasant Battle monument in West Virginia; courtesy West Virginia Collection within the Carol M. Highsmith Archive, U.S. Library of Congress.