Here, But Not Necessarily Now


I'm in Florida, doing penance as I recall my faults. It was nearly six years ago—not long after I launched this blog—when I posted a series of articles on the McClellan side of my mother's family. In particular, I wanted to focus on my third great grandfather, George Edmund McClellan, who happened to be one of the representatives at the first Florida state constitutional convention in 1838.

I don't know about you, but having an ancestor who had his name signed to a constitution—even if it was just a state constitution—seems like a big deal. I thought it would lead to a wealth of documented resources providing his biography.

Silly me. The best I could come up with was a listing of the constitution's signers—made more challenging by the fact that there is no document to verify that fact; no one knows what happened to the original document. All the State of Florida has is what is known as a "secretary's copy," with only the signatures of the convention's president and secretary affixed.

Well, there is the oral tradition. And it is fortunately preserved in online resources close to George McClellan's home in the northern part of the state.

And, at least, there is a stub of an article on George E. McClellan sitting in the ether at the back end of the digital universe known as Wikipedia.

In 2011, I promised myself I'd learn how to be a Wikipedia contributor and make that situation right. You notice how quickly I got onto that. Here it is, nearly seven years later, and nary a word has been added to the article at Wikipedia. Up until today, I hadn't even found out how to sign up as a contributor—although I have since discovered numerous help articles, now that I've suffered vast waves of remorse over my procrastinating ways.

The next step—same as it was six years ago—is to take action. I think learning to post material on Wikipedia is an excellent genealogically-minded project. So why not get with it?!

In the here and now—something quite foreign to such a procrastinator as I am—I have all excuses for action removed from me. I used to say, "whenever I get around to traveling to Florida"—but now I'm here. I could do that research right now, except for a few obstacles. The major one, of course, is my miserable habit of procrastinating.

The second one is...I had no idea how long a state this place is! Living in California as I do, I've become accustomed to traveling great distances and still being in the same state. Unlike those who are, for instance, residents of a place like Rhode Island, for a Californian, a drive of several hours becomes merely the cost of doing business. And here, I thought I could just pop up to the state capital and do some research in their archives—until I discovered it would entail a six hour round trip, just for the drive.

This predicament doesn't leave me without options, however. I may as well capitalize on the fact that I'm in the home state of those McClellans and see what else can be found while I'm here. According to some online records, George McClellan may not be the only one in the family to be involved in Florida's government. 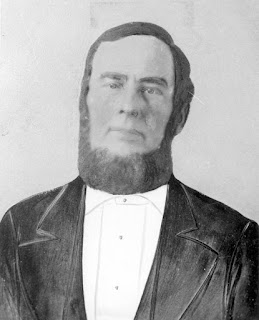 © Copyright 2011 – 2022 by Jacqi Stevens at 2:54:00 AM
Email ThisBlogThis!Share to TwitterShare to FacebookShare to Pinterest
Labels: Florida, Giving Back, McClellan, Online Resources