At Least I Thought it Was My Family


Surely it was a coincidence, yesterday, to find an Estill descendant—a relative of the very line we've just been discussing—listed in the DNA kits I administer at Family Tree DNA. The kit, however, belonged not to me, but to my husband.

When I first spotted that name in his list of DNA matches, I had to take a second look. A careful look. I had already wondered about that "Are your parents related?" test at GEDmatch, wishing our daughter had tested so we could run her numbers. (A one to one comparison between my kit and my husband's did show a smidgeon of matching base pairs, but nothing significant.)

This was not the first time one of my surnames had ended up in my husband's DNA matches. So why do surnames from my tree keep showing up in his DNA test results?!

Whoever this match was, he was a distant relative—possibly a fourth cousin, but more likely a weaker connection than even that. Normally, I wouldn't contact such a match, but in this case...well, we were just talking about this match's direct ancestors yesterday. We had left off with the children of Floyd and Susan Kincaid Estill. Their middle child—and only son, John Floyd Estill—was born in 1850 in Greenbrier County in what was, at that time, part of the state of Virginia.

John Floyd Estill, at the age of thirty three, took as his wife the young Lucie Lee Dice, daughter of John Dice and Sallie Roszell. The 1870 census listed Lucie's father as a minister of the gospel; hers was most likely considered the home of a well-bred family, for she carried that society penchant of bestowing family surnames as middle names for each of her children—including that spelling-contorted Roszell. Dice and Lewis and even a spelling-adjusted Roszelle found their places following the given names of her children.

Though as a young man, John Floyd Estill seemed to follow in his father's footsteps—in the 1880 census, he was listed as a merchant, same as Floyd Estill—in later years, he showed up in enumerations under the humbler entry, traveling salesman.

Of course, trying to figure out just how this man's descendant ended up in the listing for my husband's DNA matches is next to impossible. There are no clues to guide me—unless, like my own connection, his is buried in near-antiquity. In the meantime, this match was, thankfully, administered by one of the more dedicated DNA test participants, for it actually included a tree at FTDNA.

You know I took the time to compare notes. And drop a line. Never know when it will come in handy to have a connection with a distant cousin in the line I'm currently researching. Especially if his line ends up being the one related to that senator I've been wondering about. 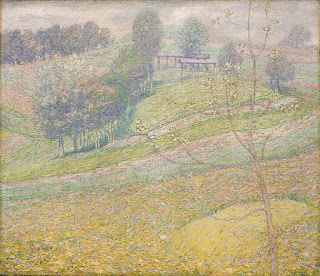 Above: "Spring," oil on canvas by Ivan Grohar, a Slovenian Impressionist artist born in the Austro-Hungarian Empire in 1867; courtesy Wikipedia; in the public domain.
© Copyright 2011 – 2022 by Jacqi Stevens at 2:39:00 AM
Email ThisBlogThis!Share to TwitterShare to FacebookShare to Pinterest
Labels: DNA Testing, Lewis, Virginia