Yes, I know spring has barely begun, but I have my mind on summer. Well, at least a California summer.

Here in California, by the time June arrives, we have long forgotten the cool breezes of March's spring. We are on to summer. And a summery June is the perfect time for my annual trek down south to take in yet another SCGS Genealogy Jamboree.

This year, the Southern California Genealogical Society is hosting their annual extravaganza on June 9 through 11 at their usual location in Burbank. What always clinches the deal for me, though, is the previous day's feature: their DNA day, this year dubbed Genetic Genealogy 2017: Diving into DNA.

As you can tell from their list of speakers—just for the one-day Genetic Genealogy session on June 8—the conference assembles a wide variety of experts in the field. Better yet, extended workshops are offered for the following morning for those who have already begun their pursuit of genetic genealogy research insights and want more in-depth training.

Jamboree is not just about genetic genealogy, though—as much as some of us would be happy to focus on that one discipline—but offers a wide variety of classes in other specialties. SCGS provides three "Heritage Focus" opportunities this year: the African-American track, the British Isles track, and the Armenian track.

Early bird registration closes on April 22. Yeah, that sounds like a long time from now. But it will be here before you know it. After all, the very first day of April is here this coming Saturday—and that's no April Fool's joke. 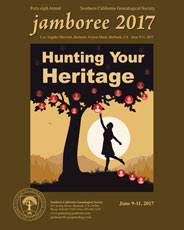 Email ThisBlogThis!Share to TwitterShare to FacebookShare to Pinterest
Labels: Conferences